Insights from the Cancer Control Field:
Smoke-Free Homes: Some Things are Better Outside in San Diego, CA 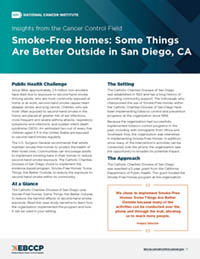 The Catholic Charities Diocese of San Diego uses Smoke-Free Homes: Some Things Are Better Outside to reduce the harmful effects of second-hand smoke exposure. Read this case study narrative to learn how the organization implemented the program and how it can be used in your setting.

The U.S. Surgeon General recommends that adults maintain smoke-free homes to protect the health of their loved ones. Communities can encourage adults to implement smoking bans in their homes to reduce second-hand smoke exposure. The Catholic Charities Diocese of San Diego chose to implement the evidence-based program, Smoke-Free Homes: Some Things Are Better Outside, to reduce the exposure to second-hand smoke within its community.

Because the organization had successfully implemented tobacco control programs in the past, including with immigrants from Africa and Southeast Asia, the organization was interested in implementing Smoke-Free Homes. In addition, since many of the intervention’s activities can be conducted over the phone, the organization saw the opportunity to broaden its potential impact.

We chose to implement Smoke-Free Homes: Some Things Are Better Outside because many of the activities can be conducted over the phone and through the mail, allowing us to reach more people.

The Catholic Charities Diocese of San Diego was awarded a 5-year grant from the California Department of Public Health. This grant funded the Smoke-Free Homes program at the organization and included face-to-face training, training materials (e.g., implementation manual), a tool to track mailings and coaching calls, printed materials for participants, and technical assistance.

The team lead from the Catholic Charities Diocese of San Diego attended a 2-day training at Emory University in Atlanta, Georgia, in November 2015. After she completed the training, she and her supervisor trained four staff members to conduct the participant recruitment component of the program. With the goal of enrolling 500 participants in the program, the staff started recruiting participants after receiving clearance from the program developers in January 2016.

The Catholic Charities Diocese of San Diego did not make any changes to the program components, using the program as intended. Within a day of an eligible participant being enrolled in the program, the Tobacco Education Clearinghouse of California sends him or her the first generated mailing, which includes interactive components (e.g., window cling, posters, pledge card).

Two weeks later, the team lead conducts the coaching call. The purpose of the 10- to 20-minute call is to discuss the mailed materials and the importance of implementing a smoke-free policy at home (banning smoking in all rooms of the house). The team lead makes up to six attempts to complete the coaching call with each participant.

After the coaching call is completed, the participant receives the first incentive (e.g., $20 gift card to Starbucks, Subway, Office Depot, or Staples).

The second mailing, transmitted through text message, discusses the challenges of implementing a home smoking ban. Later, a third mailing (sent through the mail) includes testimonials from others that have successfully implemented a smoking ban.

Lastly, at 3-month follow-up, participants receive a short call to assess whether they implemented a smoke-free home policy. After completing the followup call, they receive another incentive (e.g., $25 gift card to Starbucks, Subway, Office Depot, or Staples).

The Catholic Charities Diocese of San Diego has recruited more than 3,000 potential participants and successfully enrolled more than 150 participants. The organization has hopes to continue the program for another 5 years and is in the process of writing a proposal for another grant.

How long is a smoker enrolled in the program?

After a smoker is enrolled in the program, he or she receives three mailings, one coaching call, and one follow-up call over a 3-month period.

Did the implementer adapt the program?

No, the Catholic Charities Diocese of San Diego agreed to use the program as designed and did not make any changes to the program’s components.

To learn more about Smoke-Free Homes: Some Things Are Better Outside and how to use the program at your organization, view the program summary at: https://ebccp.cancercontrol.cancer.gov/programDetails.do?programId=28303637