This program has been evaluated on criteria from the RE-AIM framework, which helps translate research into action. Learn more about the ratings

Regular mammography screening can help reduce the chances of dying from breast cancer. Although all major medical organizations recommend regular mammograms for women over age 50, not all women are scanned regularly. Although the use of screening mammography has improved dramatically, certain populations are still not being adequately screened. Barriers to mammography include demographic characteristics, factors related to patient-doctor communications, lack of information, and physicians' or patients' knowledge or attitudes about breast cancer screening.

The program is designed to address some barriers to mammography screening and to identify strategies for motivating women to have regular mammograms. The program is guided by the Stages of Change Model, which explains the process of change for either acquiring or eliminating a particular behavior.

The intervention compared the effectiveness of a Tailored Telephone Counseling (TTC), Tailored Print Communications (TPC), and Usual Care (UC). Researchers expected that women who received either TTC or TPC would have higher mammography screening rates than women who received the usual care messages about mammography from their health maintenance organization.

The average time for a telephone call is 6 minutes. One to three calls were made over a three year period.

Study participants were women ages 50 - 80 years who had been identified through medical records as having had two or fewer mammograms in a 36-month period.

TTC can be implemented over the telephone to the homes of the participants. TPC materials can be sent to participant homes.

Costs associated with the program's implementation are not provided.

Participants were randomly assigned to one of three conditions. In the Usual Care condition (UC), a woman was sent a letter reminding her to get a screening mammogram every year if aged 50 years or older. She was sent follow-up reminders if records indicated that she had not gotten a mammogram.

In the Tailored Telephone Counseling condition (TTC), women were called twice, 2 years apart, by a trained female telephone counselor who followed a scripted protocol to reinforce previous mammography screenings, to support reasons to be screened, and to identify and overcome barriers to getting a mammography and clinical breast exam. The protocol included messages specific to the woman's stage of change (e.g., pre-contemplation or not even thinking about getting a mammogram versus contemplation or thinking about getting a mammogram).

In the Tailored Print Communications condition (TPC) a 4x5 inch, two-color booklet with graphic images was mailed to the women. The booklet was designed to look like a greeting card and personally addressed the recipient. The booklet reinforced reasons to get a mammogram and provided stage-based messages that summarized the woman's readiness to obtain regular mammograms. Unlike the usual mammography brochure, the booklet provided appropriate individual responses to barriers as reported by the women in a survey conducted prior to the intervention. 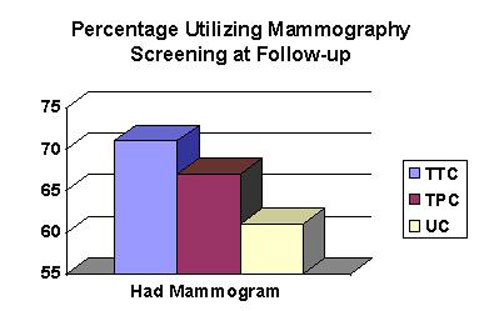