Designed to increase completion of the HPV vaccine series among 18- to 26-year-old women receiving their first dose of the vaccine, this intervention involves educating women on HPV with a DVD and fact sheet, scheduling follow-up vaccine appointments, conducting scripted reminder calls, and distributing appointment reminder cards. The study showed an increase in vaccine series completion.

Human papillomaviruses (HPVs), a group of more than 150 related viruses, are the most common sexually transmitted infections in the United States. More than half of sexually active people are infected with one or more HPV types at some point in their lives. Although some sexually transmitted HPVs cause skin warts on or around the genitals or anus, others can cause cancer. HPV types 16 and 18 are responsible for nearly 70% of cervical cancer cases and close to half of all cases of vaginal, vulvar, and penile cancer; HPV type 16 is also responsible for about 85% of anal cancer cases. Three HPV vaccines (three for females, two for males) are currently approved by the Food and Drug Administration (FDA) to protect against certain types of HPV, including HPV 16 and 18. For all HPV vaccines, three injections (doses) are given over at least a 6-month period. The Centers for Disease Control and Prevention's (CDC) Advisory Committee on Immunization Practices (ACIP) recommends routine vaccination of 11- and 12-year-olds with the HPV vaccine series. Although ACIP also recommends HPV vaccination for young women through age 26, only 34.5% of U.S. women aged 19-26 reported receiving one or more doses of the HPV vaccine compared with 53.8% of girls aged 13-17 years in 2012. Low uptake and completion of the HPV vaccine series among young women aged 18-26 represents a missed opportunity as young women have the highest HPV infection rates in comparison to other all other age groups. Further, the few regional studies reporting 3-dose HPV completion rates in women aged 18-26 indicate that completion rates range from a low of 2% to a high of 47%, with disparities among African Americans, rural women, women enrolled in public insurance programs, and women living in educationally disadvantaged neighborhoods. Even for women completing the HPV vaccine series, many fail to complete the series within the recommended timeframe. To date, most HPV vaccination-related research has focused solely on identifying predictors of vaccine acceptability, intent to vaccinate, and/or vaccine initiation without examining adherence to the full dosing schedule.

The 1-2-3 Pap: Easy Steps to Prevent Cervical Cancer intervention is a 13-minute educational DVD  designed to promote completion of the HPV vaccine series (doses 2 and 3) and routine Papanicolaou (Pap) testing among 18- to 26-year-old women who have just received the first dose of the HPV vaccine. After providing each participant with dose 1 of the HPV vaccine, the program nurse gives each woman a fact sheet with information from the CDC about HPV, cervical cancer, and the risks and benefits of the HPV vaccine; each woman is then asked to individually view the DVD on a laptop computer or other viewing device, using stereo headphones. Concepts underlying the intervention, which are based on the theory of planned behavior, include increasing knowledge and modifying attitudes, beliefs, intentions, and behaviors within a context that is culturally-appropriate for the target population. More specifically, the DVD encourages young women to consider the benefits of HPV vaccination and Pap tests, informs them about the necessity to complete the 3-dose HPV vaccine series, motivates them to complete the series, enhances self-efficacy for series completion, and helps them overcome personal obstacles to series completion. The DVD is organized into a 1-minute opening; 10 segments addressing cervical cancer statistics, HPV infection and its relationship to cervical cancer, HPV vaccination (e.g., its effectiveness, benefits, guideline-recommended scheduling), and Pap testing (e.g., the procedure, guideline-recommended scheduling); and a 1-minute closing providing cues to action. Because this DVD was created for young adult women in rural, Appalachian Kentucky, it contains HPV and cervical cancer-related content that is most relevant to this population of women; the DVD features young adult women, a nurse practitioner, a physician, and a local female television news reporter who represent the target community. The DVD uses video footage, narrative and informational sequences, still shots, and written captions.

After each participant views the DVD, the program nurse or program coordinator schedules appointments for the woman to receive the second and third dose of the HPV vaccine and gives her an appointment reminder card. The program nurse or program coordinator will provide scripted reminder telephone calls ahead of each scheduled vaccination appointment. No specific training is required to deliver the intervention; however, program nurses should be knowledable about HPV vaccination and Pap testing screening guidelines.

The 1-2-3 Pap intervention targets women aged 18-26 years who have received the first dose of the HPV vaccine series. Although the video used in the study was created for use with women in rural, Appalachian Kentucky, it could be used with or adapted for other women.

A randomized controlled trial evaluated the effects of 1-2-3 Pap: Easy Steps to Prevent Cervical Cancer. Participants were recruited over a 1-year period through a social marketing campaign that targeted young women from an 8-county catchment area of rural, Appalachian Kentucky by promoting the availability of free HPV vaccines. Research nurses provided the first dose of the HPV vaccine free of charge at local health departments, medical clinics, community colleges, outdoor festivals, Wal-Mart stores, businesses, and women's homes. Women eligible for dose 1 were 18 to 26 years old, not pregnant, and not previously vaccinated against HPV, and not have had prior vaccine reactions that would have prevented them receiving the HPV vaccine. Young women who received dose 1 of the HPV vaccine were asked to participate in a research study. Women who agreed to participate were randomly assigned to either the intervention group, which received the intervention (i.e., watched a 13-minute educational DVD) plus standard care, or to the comparison group, which received standard care alone. Standard care consisted of receipt of a fact sheet with information from the CDC about HPV, cervical cancer, and HPV vaccine risks and benefits, and follow-up telephone reminders prior to appointments for HPV vaccine doses 2 and 3.

Three hundred forty-four women completed the baseline survey and were included in the analyses. The mean age of the sample was 22 years; 94% of the women identified as non-Hispanic White; 90% had lived in southeastern Kentucky for more than 5 years, 48% reported some college as their highest level of education, nearly 26% were employed full-time, 30% were married, and 39% reported having children at home. Ninety-four percent of the participants reported ever having penile-vaginal sex, and 49% reported current birth control use. Forty-six percent of the women reported ever having an abnormal Pap test, 22% reported they had been told by a medical provider that they had a sexually transmitted disease, and 16% had been told they had HPV.

All study participants completed a baseline survey using audio-computer-assisted self-interviewing administered on a laptop computer. The baseline survey addressed theory of planned behavior constructs, including attitudes (e.g., "I feel that if I get all three shots of the HPV vaccine that I will decrease my chances of getting cervical cancer"), subjective norms (e.g., "I would be much more likely to get dose 2 and dose 3 of the vaccine if a friend went with me"), perceived behavioral control (e.g., "Would transportation prevent you from getting doses 2 and 3?"), and intention (i.e., "Do you intend to get all three HPV vaccine shots?"). Responses to the baseline survey items were used as covariates in the analyses to assess the intervention's effect on HPV vaccine series completion.

Participant's vaccination dates and series completion were tracked by medical record review for up to 9 months after the initial vaccine dose. The study article includes all records that were complete as of June 30, 2012; additional reviews of medical records and checks for data completion and accuracy were ongoing at that time. 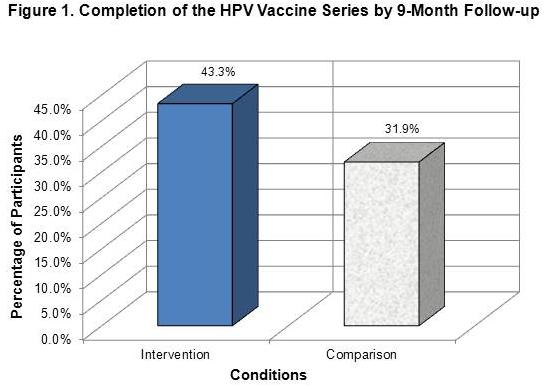 
(Be the first to write a review for this program)
Browse more HPV Vaccination programs
NCI does not endorse nor recommend any commercial products, processes, or services, nor do they guarantee the success of programs made available on the site. The views and opinions of authors expressed on this website do not necessarily state or reflect those of the NCI, and may not be used for advertising or product endorsement purposes. Rather, the information is provided to help you make an informed decision about the best program options to meet your cancer control needs. Please see the disclaimer for further information.