Designed to improve dietary habits and increase physical activity to reduce obesity, this school-based intervention includes 15 manualized sessions for teens about nutrition, healthy eating, physical activity, and mindfulness; pedometer use; and parent newsletters. The study showed an increase in steps per day, lower increase in body mass index (BMI), decrease in the proportion of overweight or obese, and decrease in depression symptoms.

For inquiries related to staff training or program implementation, please contact Bernadette Melnyk at: cope.melnyk@gmail.com or 480-206-6586.

Obese adolescents are at increased risk for becoming obese adults and developing chronic health conditions such as diabetes, heart disease, stroke, and some cancers. More immediately, obesity may have an impact on an adolescent's psychosocial well-being, which may lead to mental health disorders such as anxiety and depression. Adolescent depression may have a significant effect on an adolescent's academic achievement, relationships with family and peers, and risk of substance use and suicide. The percentage of U.S. adolescents aged 12-19 years who were obese increased from 5% in 1980 to nearly 21% in 2012. Major depression in the United States affects an estimated 2.6 million adolescents aged 12-17, representing 10.7 percent of U.S. youth in this age range. Interventions that target both obesity and depression in adolescents are needed to address these two significant public health problems in the United States.

The COPE (Creating Opportunities for Personal Empowerment) Healthy Lifestyles TEEN (Thinking, Emotions, Exercise, Nutrition) Program (COPE) is a school-based cognitive-behavioral skills-building program designed for teens aged 13-18 years. The goal of COPE is to provide education, information, and activities to help teens make healthy choices that will lead to a healthy life. COPE is incorporated into a health class curriculum and delivered in 15 weekly 50-minute sessions by health teachers in their classrooms.

Guided by cognitive-behavioral theory, the manualized program aims to help teens learn the skills they need (e.g., positive thinking, coping skills, stress management, mindfulness) to stop negative thoughts and start thinking and behaving in more positive ways. Teachers follow a manual and use materials (e.g., PowerPoint presentations) that include colorful animations and diagrams to explain lesson concepts. Sessions 1-7 and 15 address cognitive-behavioral skills building, sessions 8 and 9 focus on physical activity education, and sessions 10-14 focus on nutrition and healthy eating (e.g., balancing a healthy diet, reading food labels). Each COPE session incorporates mindfulness exercises as well as 20 minutes of physical activity to establish students' beliefs and confidence in their ability to engage in and sustain physical activity on a regular basis. Teens receive a COPE manual with homework activities they complete after each session to assist them with putting the information they are learning into practice. To supplement the physical education component of the intervention, participants wear pedometers each day and track their daily steps. They are encouraged to increase their weekly step count by 10% each week.

Four parent newsletters are sent home with participants during the course of the program to inform parents about what their teens are learning through COPE, encourage a dialogue between parents and teens about the information conveyed in the program, and suggest opportunities for parents to engage in COPE activities with their teen (e.g., going on walks together, picking out healthy foods). The four newsletters provide an overview of session 1, sessions 2-5, sessions 6-9, and sessions 10-14.

Prior to offering COPE in the classroom, teachers/providers must complete a 2.5-hour online training webinar, a one hour conference call with a COPE expert, deliver one practice session with participants, and submit a completed Practice Delivery Results Form to the COPE administrator. Teachers/providers also must obtain a passing score of 80% or greater on a 20-question multiple-choice quiz to ensure understanding of the basic program elements. After completion of these requirements, teachers/providers receive a certificate of training completion and may purchase a program delivery license (valid for 1 year for the person who received the training certificate) that authorizes them to deliver the program and purchase implementation materials. The program license is renewed annually for a fee. A seven-session version of COPE that contains the cognitive-behavioral skills building sessions to specifically reduce anxiety and depressive symptoms is available for health care professionals, teachers, clinicians, and counselors who want to deliver the program in settings other than school classrooms, such as mental health settings, school-based clinics, primary care settings, and specialty care clinics. An interactive on-line version of the seven-session COPE program also is available for adolescents. The study reviewed for this summary was based on an evaluation of the 15-session school-based COPE program.

-- 2.5 hours for each teacher/provider to complete the COPE Instructor Online Training Webinar

-- 1.0 hour for each teacher/provider to have a conference call with a COPE expert (for the 15-session COPE program)

-- 50 minutes to deliver each COPE session to participants

The intervention is for teens aged 13-18 years.

The intervention is delivered in schools. The seven-session version of COPE can be implemented in clinical and community settings.

-- Pedometers (one per participant)

A randomized controlled trial was conducted from 2010 to 2012 in 11 high schools in two school districts in the southwestern United States. Personnel from the two districts selected the 11 schools, which were randomly assigned to receive either COPE or the attention control intervention, Healthy Teens. Schools were not matched on any characteristic. Program participants were freshman and sophomore students aged 14-16 years enrolled in required health education classes. The 779 study participants had a mean age of 14 years, and 51.6% were female. The sample was 68.3% Hispanic/Latino, 14.1% White, 9.9% Black, 4.0% Asian, and 3.5% American Indian.

Research team members introduced the study to all students in the 11 high schools and gave assent/consent packets to those who expressed interest in the study. Students who returned a signed assent and parent consent were enrolled in the study. All students in the health classes received either COPE or Healthy Teens, but outcome measures were only obtained from study participants. The primary aim of the study was to assess the efficacy of COPE compared with Healthy Teens (which addresses various health issues that are not the focus of COPE) on healthy lifestyle behaviors measured by changes in physical activity and body mass index (BMI). Secondary outcomes were depressive and anxiety symptoms, social skills, substance use, and academic performance (i.e., grade in the health class).

High school health teachers received a full-day training on COPE to help them integrate the program into their health course for 15 weeks. Health teachers in the attention control schools received a full-day training on the Healthy Teens program. Healthy Teens was administered to mimic the delivery of COPE, but there was no overlap in content between the two programs. The Healthy Teens content focused on teen safety, dental care, infectious diseases, immunizations, and skin care. Students receiving Healthy Teens were provided with a manual and homework assignments each week, and the students were encouraged to review four parent newsletters with their parents. Notably, Healthy Teens students were only provided with pedometers during the first week and first post-intervention week to determine their average weekly step counts for assessment purposes. Fidelity to program implementation was monitored for both COPE and Healthy Teens programs. Health teachers in both groups were observed during program implementation by research staff for four announced sessions. The observers completed a standardized fidelity observation form during these sessions.

Because the study sample included a large number of Hispanic/Latino students, acculturation was measured with the Acculturation, Habits, and Interests Multicultural Scale for Adolescents. Acculturation, race/ethnicity, weight, and hours of television watched daily were included as control variables in the analyses. Outcome measures were assessed during the study period at baseline, post-intervention, 6-month follow-up, and 12-month follow-up.

Measures obtained at baseline and post-intervention were the following:

Measures obtained only at post-intervention were the following:

Measures obtained at baseline, post-intervention, and 6-month follow-up were the following:

-- Self-reported substance use measured with the Youth Risk Behavior Survey.

Measures obtained at baseline, post-intervention, and 6- and 12-month follow-up were the following:

-- Weight measured with a scale (Tanita).

-- Self-reported depressive symptoms measured with the depression subscale of the BYI-II. The subscale includes 20 items (e.g., "I think that my life is bad"). The sum of the items is standardized to a T score, with a mean of 50 and higher representing greater depression (i.e., <55 is the average norm, 55-59 suggests mildly elevated depressive symptoms, 60-69 suggests moderately elevated symptoms, 70+ suggests extremely elevated symptoms). 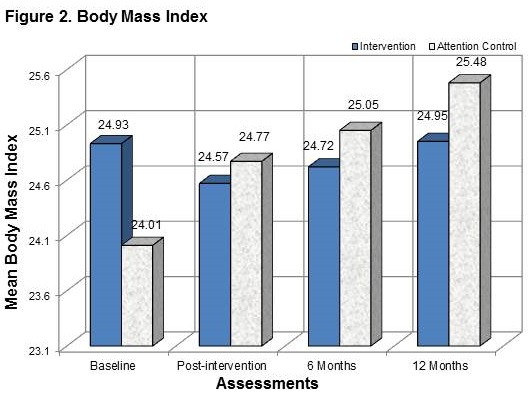 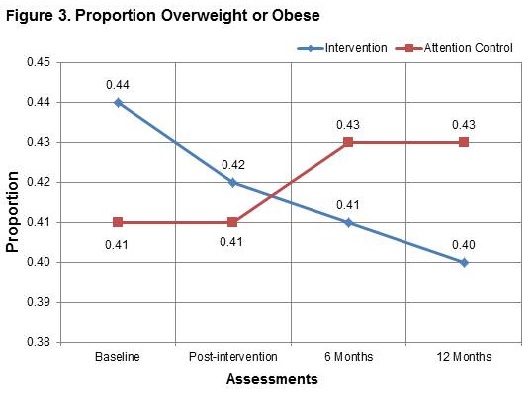 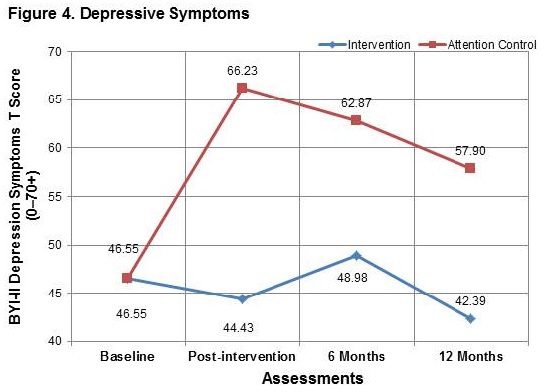