Details about Reach
60.0%
Details about Effectiveness
33.3%
Details about Adoption
N/A - Not Applicable
Details about Implementation
71.4%
This program has been evaluated on criteria from the RE-AIM framework, which helps translate research into action. Learn more about the ratings

The program requires a participatory planning process (approximately 12 weeks) and three media campaign waves (8 weeks for Wave 1; 4 weeks each for Waves 2 and 3) during 12 months.

Participants were 50- to 65-year-old adults in West Virginia; 68 percent were women; 43 percent had annual incomes below 30K; 95 percent were White and 5 percent were African American.  Twenty five percent were college graduates.

The intervention is suitable for implementation in the community through mass media communication channels. Worksites, churches and local organizations also should be incorporated into delivery.

The CD-ROM entitled, "Training Manual for a Media-Based Campaign for Walking based on Wheeling Walks."  Costs associated with the study's implementation (not including evaluation) were approximately $150,000 for the 12-month implementation.

The community of Wheeling, WV, was chosen as the intervention group (called Wheeling Walks, or WW), with Parkersburg, WV, chosen as the comparison group.  Both Appalachian cities have similar demographics but no overlapping media.  The intervention targeted sedentary and irregularly active 50- to 65-year-old residents.  Prior to the campaign in Wheeling, 12 weeks were spent mobilizing community members (e.g., elected officials, community agencies, health professionals) to assist with subsequent planning and implementation.  Once the 8-week Wheeling Walks campaign was initiated, activities included:

A booster campaign was planned for September 2001, but was cancelled due to terrorist attacks that month.  A second booster was implemented roughly 6 months later.  The 4-week booster consisted of additional TV commercials, news print advertising, radio spots, and 4 public relations events.  In addition, a 16-week free walking clinic was established, but evaluation data was not collected for this component. 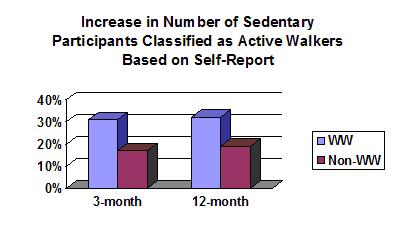 Evaluation and Modification of Exercise Patterns in the Natural Environment