Designed to help increase breast cancer screening among low-income, underinsured women, this intervention consists of two mailers, sent a month apart, each containing a folded card with a brief message about the availability of a free mammogram and prompts to call a toll-free number for more information. The study showed an increase in mammography screening rates.

Although mammography rates have been increasing overall, a 25% gap between the rates for insured and uninsured women has persisted. Women who are eligible for Federal programs that cover all or part of the costs of mammography remain under-screened relative to the general population. Even making free screening services available does not ensure screening. A challenge for national screening programs has been to find effective, simple, inexpensive, and sustainable population-wide strategies to recruit underserved women to use these services. In contrast to mass media and more intensive approaches, direct mail interventions may represent a more promising population-based strategy for promoting mammography use among underserved women.

In an effort to increase mammography utilization among low-income, underinsured women aged 40-64, two mailers are sent to households, approximately one month apart, from a commercial mailing list of women in the targeted age group from census blocks having household size and income characteristics consistent with income guidelines for the State's screening program. The mailers consist of a folded card with a very brief message about the availability of a free mammogram and a prompt to call a toll-free number for more information. The mailers are limited in text and rely on effective, evocative, and engaging images, with a clear and simple action step for the reader (e.g., "Call this number now for an appointment").

Implementation of this intervention minimally includes selecting and purchasing the appropriate mailing list, preparing and mailing the materials. The time required to implement this intervention varies, depending on the amount of customization and refinement of the materials, as well as turnaround time for design and production.

The primary audience for this intervention is low-income, underinsured women aged 40-64.

This intervention is suitable for implementation by mail.

A randomized, controlled trial was used to test the efficacy of a direct mail intervention as a population-wide approach for increasing screening mammography use among women who are eligible for free screening services through the National Breast and Cervical Cancer Early Detection Program (NBCCEDP). Women in the first intervention condition received two different mailers, sent approximately one month apart. Women in the second intervention condition received the same mailers plus a $10 monetary incentive for those who complete a mammogram within approximately one year. These groups were compared to a no-intervention control group. Women in all three study groups may have been exposed to other ongoing NBCCEDP program recruitment activities, including efforts by community health agency recruiters, occasional print and broadcast media advertisements, and individual participating clinics promoting the program to their patients.

The primary outcome was completion of a mammogram through Sage, the NBCCEDP program in Minnesota, within 13 months after the intervention's onset.

The sampling frame provided 145,467 possible participants for the study, with a mean age of 49.7 years. Cases were split into low versus high mammography rate clusters (MRC), based on NCI's Consumer Health Profiles that reflect associations between health behaviors and Claritas PRIZM cluster assignment for each woman. Of the 145,467 possible participants, 34,540 (23.7%) were from low MRC strata and 110,927 (76.3%) were from high MRC strata. Cases were randomized to each group, although since the high MRC stratum was much larger, a higher percentage of high MRC cases were allocated to the control group. In total, 25,633 participants were randomly assigned to the mail only group, 25,633 were assigned to the mail plus incentive group, and 94,201 were assigned to the control group. 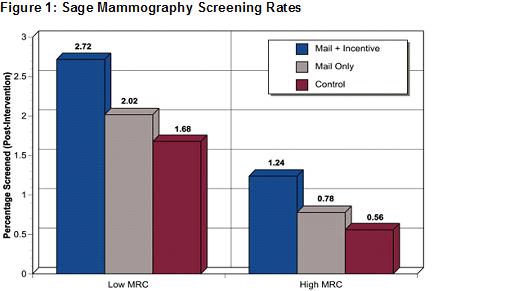