Designed to prevent tobacco use among students in grades 7-9, this intervention has a classroom-based component that includes a videotape on the health consequences of tobacco use, review of celebrity endorsements of nonuse, interactive activities, and the rehearsal of refusal methods for students in seventh and eighth grade followed by a telephone- and newsletter-based booster in ninth grade. The study showed a smaller increase in combined tobacco use (use of either smoking tobacco or smokeless tobacco).

Although adolescent tobacco use is at its lowest rate since the early 1990s, use of cigarettes and other forms of tobacco by children under 18 remains high. According to the 2008 Monitoring the Future survey, the proportions of students indicating any smoking in the prior 30 days ("monthly prevalence") now stand at 7 percent, 12 percent, and 20 percent in grades 8, 10, and 12, respectively, while the monthly prevalence rates for any use of smokeless tobacco in these grades are 4 percent, 5 percent, and 7 percent.

Cigarette smoking leads to immediate and serious health problems including respiratory and nonrespiratory effects, addiction to nicotine, and the associated risk of other drug use. Smoking at an early age increases the risk of lung cancer. For most smoking-related cancers, the risk rises as the individual continues to smoke.

Many programs have been developed to prevent adolescent tobacco use. However, evaluations of these programs have often found that the initial positive effects are not maintained, and youth may continue to use tobacco or even increase their use. The most successful prevention programs use a multifaceted approach, emphasizing the social influences model, social skills training, media influences, and norm perceptions.

Project SHOUT (Students Helping Others Understand Tobacco) is a tobacco use prevention program for middle/junior high school students. It includes a classroom-based component delivered to students in their seventh- and eighth-grade years, followed by a telephone- and newsletter-based booster in their ninth-grade year. The classroom component consists of eighteen 50-minute sessions over 2 school years. Ten sessions were given during the 7th grade year and 8 sessions were given during the 8th grade year. The booster component reaches participants individually and delivers a tobacco use prevention message tailored to each participant's needs.

In the fall of their seventh-grade year, students participate in six weekly sessions. During these sessions, they watch a videotape on the health consequences of tobacco use, read celebrity endorsements of nonuse, discuss the antecedents and social consequences of tobacco use, rehearse methods of resisting peer pressure, and practice decision-making. They also write letters to tobacco companies describing their position on youth tobacco use and perform a skit for their classmates in which they demonstrate refusal skills. In the spring of their seventh-grade year, students receive four monthly sessions during which they review refusal methods and discuss tobacco addiction and cessation. Participants attend an assembly to watch skits performed by their peers and a slide show of the past year's activities. Students also receive T-shirts with the SHOUT logo.

In eighth grade, students receive eight monthly sessions reviewing demonstration and rehearsal of refusal methods. Students also debate tobacco issues, participate in anti-tobacco community activities, and attend an assembly reviewing the year's activity.  The following year, a series of five newsletters is mailed to the homes of the students. Each four- to six-page newsletter contains information about tobacco control events, legislation, research, the tobacco industry, cessation tips, and a question-and-answer column. Two newsletters per year are also mailed to the parents of the SHOUT participants. Trained counselors call each SHOUT participant twice per semester, approximately one week after the newsletters are mailed. During the phone conversation, counselors ask open-ended questions to elicit comments about the newsletter content, discuss refusal skills training, tobacco news, and tobacco cessation, and offer information on a local free cessation help line.

Approximately 15 hours of initial training are required for each staff member who will administer the classroom sessions, and an additional 2 hours of training are required prior to the introduction of each new phone call script. The time required to implement the program includes 15 hours over 2 school years for the scheduled classroom sessions, plus 5 minutes per student on average for each of the phone booster sessions. Time is also required to create, print, and mail two parents newsletters each year over the 3 years of the program, and five newsletters to the students during their 9th grade year.

The primary audience for the Project SHOUT is students in grades 7, 8, and 9.

Project SHOUT is designed to be administered in school-based settings serving students in grades 7, 8, and 9.

A photocopier is needed to reproduce the student workbooks. Students who participated in the study received T-shirts with the Project SHOUT logo.

Fifty-four middle/junior high schools were approached to participate in Project SHOUT based on their size (having fewer than 450 seventh graders) and their proximity to Project SHOUT headquarters (within a 1-hour drive). Of the 54 schools approached, 23 agreed to participate.  The participating schools were divided according to school size, matched on prevalence of tobacco use, and then randomly assigned to the intervention condition (12 schools) or control condition (11 schools); one of the control schools was unable to complete the surveys and was dropped from the study.  The SHOUT intervention was delivered in eighteen 50-minute sessions.  There were 6 fall sessions (once a week) and 4 spring sessions (once a month) during the students' seventh-grade year and there were 8 sessions (once a month) in the 8th grade year.  In addition, two parents newsletters are sent each year over the 3 years of the program, and five newsletters are sent to the students during their 9th grade year.  The baseline sample included 3,655 students. At the end of the 3-year study, 2,668 students remained.

Parents of students in the selected classrooms were sent consent forms requesting their permission to allow their children to participate in the program. To improve the validity of the students' self-reported tobacco use, Project SHOUT surveys were administered under a bogus pipeline condition; saliva samples were collected immediately prior to the survey administration, and students were informed that each sample could be analyzed for tobacco by-products although none were ever analyzed.  (This method has proven to reduce response bias in the collection of self-report data.)  The majority of parents who refused to give their consent did so because of the saliva sample collection. Saliva samples were collected only from those students whose parents provided consent, but all students participated in the project, including surveys.

Data were collected using a series of four student surveys: two in the first year of the project (fall and spring), one in the spring of the second year, and one in the spring of the third year, which served as the final follow-up. Administered in the classrooms by trained undergraduate volunteers, the surveys elicited information on smoking and smokeless tobacco use and on psychosocial and demographic variables associated with tobacco use. Past-month tobacco use prevalence rates were computed by averaging the percentage of tobacco users in each condition across schools. Prevalence rates were calculated for both smoking and smokeless tobacco use.

The control group did not receive any treatment during the study period. However, 4 years after baseline, when the control students entered high school, the researchers executed a crossover design by assigning half of the control group to a smoking cessation intervention and half of the intervention group to a no-treatment control condition. The other halves continued in their previous experimental assignments.

Effects of Project SHOUT on Combined Tobacco Use 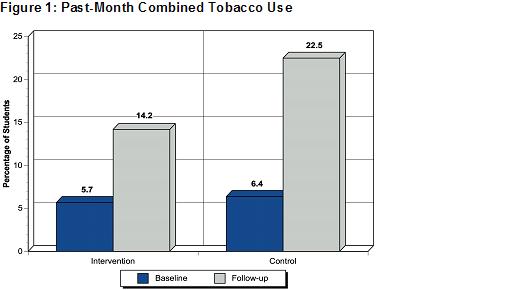 Effects of Project SHOUT on Smoking

Effects of Project SHOUT on Smokeless Tobacco Use

Designed to prevent tobacco use among high school students.

Designed to prevent tobacco use among students in grades 4-12.