On average, Americans consume too many solid fats, refined grains, and added sugars, along with too much sodium.  Although fats and oils are part of a healthful diet, total fat intake should be between 20% and 35% of calories, with most fats coming from sources of polyunsaturated and monounsaturated fatty acids, such as fish, nuts, and vegetable oils.

Americans also consume too few vegetables, fruits, and high-fiber whole grains. People who consume more fruits and vegetables as part of a healthful diet are likely to lower their risk of cancers in certain sites (oral cavity and pharynx, larynx, lung, esophagus, stomach, and colon-rectum). They can also lower their risk of chronic diseases such as type 2 diabetes and cerebral vascular disease. A diet rich in fruits, vegetables, and whole grains may also reduce the risk of coronary heart disease.

The Dietary Guidelines Advisory Committee on the Dietary Guidelines for Americans (2010) recommends improving nutrition literacy and cooking skills. The guidelines also emphasize the need to empower and motivate families with children to prepare and consume healthy foods at home.

The advisory committee is typically composed of six to eight religious community members who are representative of the congregation and enthusiastic about the intervention. This committee plans, schedules, advertises, and oversees the EHL social activities and healthy eating classroom sessions and distributes the intervention materials.  While the EHL time line is flexible, a suggested schedule for delivery is five advisory committee meetings (with the first three meetings held monthly and the last two meetings held bimonthly) for the planning of five EHL social activities and six healthy eating classroom sessions over a 9-month period.

Planned social activities might include low-fat treats after religious services, fruit smoothies for children's classes, healthy snacks at adult education, and a healthy recipe handout or exchange at choir practice.  Healthy eating sessions may include adult or family education, discussions, and/or cooking demonstrations.  Four self-help booklets (Help Yourself, Breakfast, Lunch & Snacks, and Dinner) are distributed bimonthly along with motivational messages.  Tip sheets and recipes copied from the EHL recipe book provide detailed information on healthy food selection and preparation and are distributed at faith community gatherings such as dinners, coffee hours, or study classes.

The intervention has been designed to be delivered yearly over a 9-month period, with complete flexibility in the duration of advisory committee meetings, social activities, and healthy eating classroom sessions.  Since EHL social activities can take place anywhere within the faith community, they are often incorporated into existing events. Healthy eating classroom sessions can last 30 minutes to 1 hour.

The intervention targets members, 18 years and older, belonging to a religious organization.

The intervention is suitable for implementation in religious organizations.

A randomized clinical study evaluated the effects of a low-intensity dietary intervention delivered in religious organizations to decrease members' consumption of fat and increase consumption of fiber (fruit and vegetables). Forty religious organizations (ROs) were randomly assigned to one of two conditions, the 9-month EHL intervention or a delayed-intervention control (receiving the EHL intervention after about 12 months, on average).  The primary food preparer in each household of a randomly selected cohort of at least 35 member households from each participating RO was surveyed by telephone at baseline and post-intervention (about 12 months after randomization).  To be eligible to participate in the telephone survey, the primary food preparer had to be 18 years of age or older and an English speaker with a working phone number and address; an active member of the RO (attending religious services or other RO events at least 12 times in the past year); planning to live in the area over the next year; and agreeable to participation in a follow-up survey.

At baseline, the survey collected information on socio-demographic characteristics and religiosity and measured fat and fiber dietary behaviors using a modified version of the Fat and Fiber Behavior (FFB) questionnaire, a 36-item scale that measures fat and fruit and vegetable consumption. Each FFB item was rated on a 4-point frequency scale that varies from "usually or always" to "rarely or never" for the prior 3 months.  For fat-related consumption, a fat summary score consisted of five subscales: "avoid fat as flavoring", "replace high-fat meats with fruits and vegetables", "substitute specially manufactured low-fat foods", "replace high-fat foods with fruits and vegetables", and "modify meats to be lower in fat" (e.g., "How often did you trim all the fat before cooking?"). For fiber-related consumption, a fiber summary score consisted of three subscales: "cereals and grains", "fruits and vegetables", and "substitute high-fiber for low-fiber foods" (e.g., "How often did you eat brown instead of white rice?").

The follow-up telephone survey repeated the modified FFB questionnaire and asked about the frequency of print advertisements and motivational messages seen in bulletins or posted in the RO, healthy eating social activities, and any other health-related activities occurring at the intervention and control RO sites since the baseline survey. Follow-up survey reports from RO members at the EHL intervention sites were cross-checked with social activity/event participation logs and recorded occurrences of motivational messages and print advertisements completed by EHL social activity/event organizers.  A total of 2,175 RO members (average age 54 years; range, 18-100 years) completed the baseline survey.  Eighty-nine percent of the participating RO members were non-Hispanic White (consistent with the ethnic population of the United States Pacific Northwest), 86% were college-educated (14% reporting a high school degree or less), and 70% were married or partnered at the time of the baseline survey.

The 12-month follow-up rate was 90%. Compared with RO members who completed the follow-up survey, RO members who failed to provide follow-up survey data had higher baseline fat summary scores on the FFB and were more likely to be older, better educated, married, and living with children. RO member study dropouts were similarly distributed between the intervention and control ROs, so the basic randomized study design was not compromised. Since one of the main outcome measures, the fat summary score, differed between the intervention and control ROs at baseline, the baseline fat summary score was factored into the outcome analysis as a covariate. 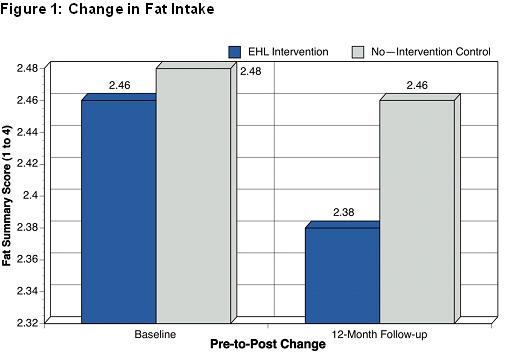 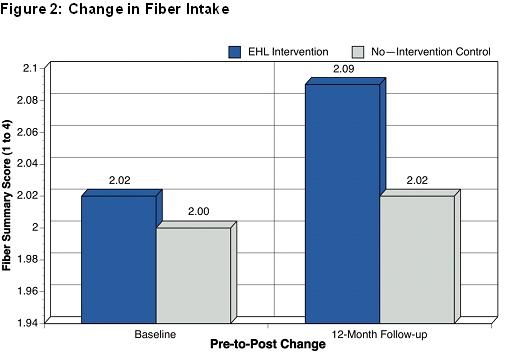