Designed to reduce indoor tanning among young women, this intervention uses a booklet and website links to explore tanning norms, describe the skin-damaging effects of UV radiation and indoor tanning, and provide appearance-enhancement alternatives to tanning. The study showed a decrease in indoor tanning sessions.

Skin cancer represents a serious public health threat, claiming more than 10,000 lives in the United States annually. Each year, more than 1.3 million individuals are diagnosed with skin cancer, and more than $1 billion is spent for skin cancer treatment. Many studies have demonstrated a significant relationship between indoor tanning and melanoma and squamous cell carcinoma. Despite these risks, indoor tanning is gaining in popularity, particularly among youth. The U.S. indoor tanning industry has an estimated 30 million users, and recent reports indicate that approximately 10% of U.S. adolescents under age 15 have used indoor tanning in the past year, with prevalence among older adolescent females estimated at 25% to 40%. Studies indicate that appearance factors are most predictive of indoor tanning use, followed by social factors, perceived susceptibility to skin damage, and dependence on ultraviolet (UV) light exposure. Unlike most previous interventions, this one focuses on improving attitudes toward viable, healthy, appearance-enhancing alternative choices, and it can be delivered to large audiences easily and cost-effectively.

The intervention consists of a 24-page booklet designed to reduce indoor tanning by altering attitudes about indoor tanning and presenting alternative behaviors related to appearance. The booklet is written at an eighth-grade reading level and is based on decision-theoretical models of health behavior. The booklet contains three appearance-enhancement alternatives to tanning: exercise, clothing, and sunless tanning. Section 1 introduces the history of tanning, providing a context for current tanning norms. Section 2 provides an analysis of current tanning norms and an examination of media and peer image norms. Section 3 discusses the effects of UV radiation on skin with the intent of increasing perceived susceptibility to skin damage from UV exposure. Section 4 discusses the specific effects of indoor tanning, again with the intent to increase perceived susceptibility to skin damage. Section 5 provides indoor tanning guidelines, emphasizing tanning abstinence and recommendations to reduce harm. The last section provides information on healthier, appearance-enhancing alternatives to tanning, including exercise, choosing fashion that does not require a complementary tan, and sunless tanning products. Links to websites on these alternatives are also provided. Both the booklet content and the links related to sunless tanning emphasize that sunless tanning does not protect against UV exposure.

Time is required to distribute the booklet and for participants to read it. In some settings (e.g., health center), face-to-face follow-up discussions to answer questions and provide clarification may be recommended.

The intended audience for this intervention is young female indoor tanners.

The required resources for this study include:

-Beauty tips for life: Keep the skin you were born in! booklet
-Personnel to order and distribute the booklets and conduct face-to-face follow-up discussions, if desired.

A computer generated a random list of 1,690 female university students from 2 universities. The students were sent an invitation email with a screening survey assessing past indoor tanning behavior and future intentions. Email receipt was confirmed for 853 individuals. Inclusion criteria were past-year indoor tanning or a score of 5 or above on a 7-point scale that measured intentions to tan in the next year. Eligibility requirements were met in 454 of the 853 (53.0%) individuals, and 430 agreed to complete and did complete baseline measures. Participants ranged in age from 17 to 21, with a median age of 18.6 (SD=0.78). Participants were randomized into intervention (n=200) or no intervention control conditions (n=230). The final groups consisted of 195 intervention participants and 217 controls. Participants completed the baseline assessment in the fall. Intervention participants were then given the intervention and asked to provide feedback 1 month later, which provided an evaluation of whether the materials were attended to and comprehended. All participants were reassessed at 1-month follow-up for mediational analyses. All long-term follow-up assessments took place in April, 6 months after the booklets were distributed to intervention participants, which allowed for assessment of indoor tanning during the period of heaviest use.

At both baseline and 6-month follow-up, participants completed an online survey indicating how often they had participated in indoor tanning in the previous 3 months (August through October at baseline; February through April at follow-up). The baseline assessment covered a period with some of the lowest expected indoor tanning use, while the follow-up assessment covered a period with the highest rates of use. Participants were also asked about their intentions to tan indoors in the future.

At baseline and 1-month follow-up, participants were asked to indicate their level of agreement with several statements regarding attitudes toward indoor tanning (e.g., "All things considered, I believe that indoor UV tanning is a good thing for me"); attitudes toward sunless tanning (e.g., "Sunless tanning lotions are a good way to look more attractive"); and attitudes toward fashion (e.g., "I feel that wearing nice clothes makes me more attractive"). Participants were asked to complete three items indicating the degree to which they believed tanning improves attractiveness (e.g., "I look more attractive when I have a nice tan") and three items indicating the degree to which they perceive indoor tanning as a good way to relax and relieve stress (e.g., "I love the warm feeling of indoor UV tanning"). Finally, participants were asked whether friends and typical and popular college students think they should (or should not) tan indoors, rated on a 7-point scale from "strongly think I should" to "strongly think I should not", and how motivated they were to comply with the referent's indoor tanning opinions, rated on a 7-point scale from "completely motivated" to "not at all motivated." Participants were also asked to rate their level of agreement on a 5-point scale regarding tanning norms for models and actresses. 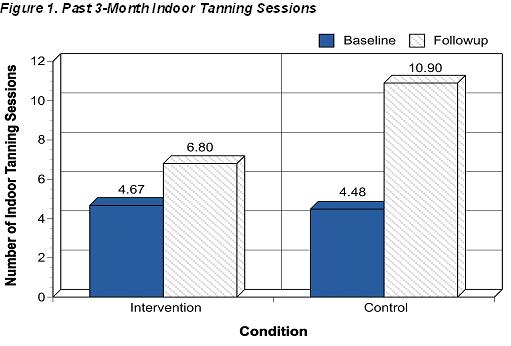 The Appearance-focused Skin Cancer Prevention Intervention program is related to the following:

Skin Cancer Prevention: Useful Information for Parents from the Fields of Behavioral Science and Dermatology in that:

Hillhouse, JJ, Turrisi. (2002, Aug). Examination of the efficacy of an appearance-focused intervention to reduce UV exposure. Journal of Behavioral Medicine, 25 (4), 395-409.