Designed to promote smoking cessation and prevent smoking relapse among mothers of newborns, this intervention delivered by pediatric practices during the first four well-baby visits emphasizes the adverse health effects of secondhand tobacco smoke on newborns through materials tailored to the mother’s current smoking status and brief discussions with the pediatrician. The study showed higher rates of nonsmoking and lower relapse rate.

Exposure to secondhand smoke causes health problems in infants and children, including increased risk of SIDS (sudden, unexplained, unexpected death in an otherwise healthy infant in the first year of life), severe asthma attacks, and increased respiratory and ear infections.  Consequently, smoking cessation and relapse prevention programs that emphasize the adverse health effects of newborn exposure to secondhand smoke in the home are important for new mothers.

The Modification of Maternal Smoking (M.O.M.S.) Project is a brief pediatrician-delivered intervention to encourage new mothers who smoke to stop smoking and mothers who are abstinent from smoking not to relapse. The program emphasizes the adverse health effects of secondhand, environmental tobacco smoke on newborns. Each encounter of the M.O.M.S. project is designed to be about 2 minutes long and incorporated into each of the first four, well-baby visits postpartum (2 weeks, 2 months, 4 months, and 6 months). M.O.M.S. starts with the new mother's smoking status at the time of the visit; that is, "smoker", reporting current use of cigarettes, or "quitter", not currently smoking, but having smoked in the month prior to pregnancy. Babies' charts are tagged with a label denoting the mother's smoking status and a checklist that prompts the pediatrician to deliver the M.O.M.S. program.

At each doctor's visit, a nurse or receptionist inserts a set of written materials, tailored to the mother's current smoking status, into the chart.  Pediatricians are trained to engage smoking mothers in a brief discussion about how much they smoke, barriers to quitting, and the results of past attempts to quit. Smoking mothers are then asked whether they are willing to set a quit date, and if so, are encouraged to follow through with the help of materials developed by the American Lung Association and a list of local resources for assistance in quitting. Written materials received by the mother include pamphlets on adverse health effects of passive smoking, quitting strategies, role modeling, and a letter to fathers advising them of the adverse health effects of secondhand smoke and encouraging them to support a smoke-free home environment for the baby.

The program includes a 23-minute instructional video for training health care providers called "Modifying Maternal Smoking: A Pediatric Office Program". It is recommended that 45 minutes of training be held as part of a regularly scheduled, office business meeting. Training covers modern concepts of smoking intervention and the practical aspects of program implementation (i.e., tagging a baby's medical chart with the mother's current smoking status and using the right set of M.O.M.S. program materials in the chart for each visit). Implementation of the M.O.M.S. program should take about 2 minutes and occurs in the context of usual care during each of the first four postpartum, well-baby visits.

The intervention targets new mothers aged 13 and older who are smoking or are currently tobacco-abstinent but report smoking in the month prior to pregnancy.

The intervention is suitable for implementation in community-based private pediatric practices.

A randomized clinical study evaluated the effects of a pediatrician-delivered smoking cessation/relapse prevention program (M.O.M.S.) to new mothers who smoke or were recently tobacco-abstinent. The program was delivered at each of the first four well-baby care visits postpartum (2 weeks, 2 months, 4 months, and 6 months). Forty-nine private pediatric practices with 128 consenting pediatricians were block randomized to either a minimal or extended (minimal plus M.O.M.S.) intervention after matching for practice location (metropolitan vs. other) and number of pediatricians in the practice.

The minimal intervention consisted of a set of materials added to a routine hospital packet distributed to all mothers with newborns. The added materials included a brochure describing the adverse health effects of passive smoking, a letter to the mother from the pediatrician about the consequences of passive smoking, and a nonsmoking sign to hang above the newborn's crib. All new mothers receiving care from pediatricians in study-enrolled practices received added materials in their hospital packet (minimal intervention). A mother was eligible to be in the study at the first pediatrician visit (baseline) if she completed a general health questionnaire and answered "yes" to the question, "Did you smoke in the month prior to becoming pregnant?" Additional questionnaire items permitted a breakdown of mothers into "smokers" (currently smoking) and "quitters" (currently not smoking).  A total of 13,495 mothers of newborns (86.5% Caucasian, 3.7% Native American Indian, 2.9% Asian, 2.8% Hispanic, and 1% African American) completed the questionnaire at baseline. Their mean age was 28.21 years (range=13 to 51 years old).  Of these, 2,901 mothers reported smoking in the month prior to becoming pregnant and agreed to respond to a further survey, which constituted formal study enrollment. After the 6-month well-baby office visit, mothers in both interventions were mailed a follow-up survey.  The follow-up survey assessed current smoking status defined by whether the mother had smoked at all in the prior 7 days and, if so, how many cigarettes she smoked daily (1-4, 5-10, 11-20, and >20 cigarettes); smoking habits in the household; intention to quit status if the mother was still smoking; and the mother's knowledge and attitudes on passive smoking.  Knowledge of the health effects of passive smoking was measured by seven "true/false" items (a perfect score was 7). Attitudes toward passive smoking were measured by four items rated on a 5-point Likert type scale that varied from "strongly agree" (1) to "strongly disagree" (5), with low ratings indicating a more positive health-conscious attitude.  Six-month follow-up survey data were available on 2,336 mothers (1,356 mothers assigned to the extended-M.O.M.S. intervention and 980 mothers assigned to the minimal intervention).  Small, but significant condition differences in age and education at baseline were factored into all outcome analyses. 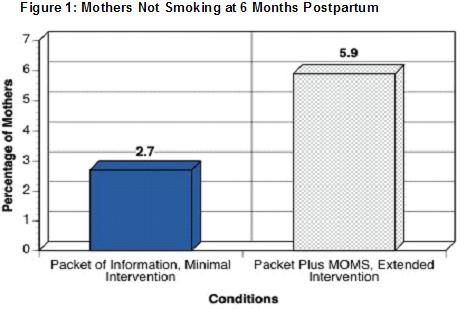 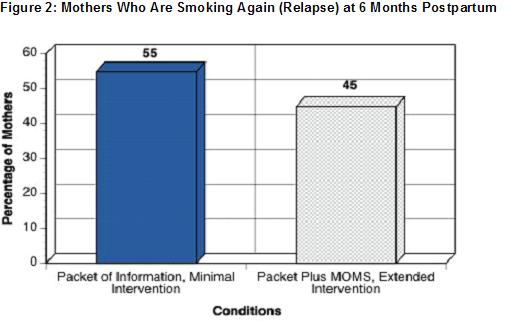