Designed to increase sun safety practices among postal service letter carriers, this intervention is led by health educators who visit postal stations to distribute refillable bottles of sunscreen, hats, and other materials; install and regularly refill large pump bottles of sunscreen; and deliver presentations to promote the use of solar protective strategies. The study showed increases in the use of wide-brimmed hats and sunscreen while delivering mail.

In 2006, approximately 62,000 people in the United States were diagnosed with melanoma, and more than 1 million were diagnosed with nonmelanoma skin cancers. Exposure to solar ultraviolet radiation (UVR) is a key risk factor for these diseases. Reducing exposure to UVR is associated with a decreased risk of skin cancer. Outdoor workers may receive 6 to 8 times the dose of UVR that indoor workers receive, and they have a higher risk for squamous cell cancer and possibly other forms of skin cancer. U.S. Postal Service (USPS) letter carriers are one such high-risk group, working outdoors an average of 5 hours per day according to one descriptive study. Despite their increased risk for skin cancer due to regular exposure to UVR, only 14% reported that they always wore sunscreen, and only 33% reported that they always wore a hat.

Sun Safety Among US Postal Service Letter Carriers ("Project SUNWISE") is a skin cancer prevention intervention promoting the regular occupational use of wide-brimmed hats and sunscreen by USPS letter carriers.

Health educators visit participating postal stations and distribute free 12-ounce refillable bottles of sunscreen, hats, and coupons for discounts on replacement hats to the letter carriers. The health educators install large pump bottles of sunscreen in locker rooms at the intervention stations, which they refill regularly. They also distribute materials to promote use of solar protective strategies.

In addition, the health educators deliver an introductory presentation at the beginning of the intervention followed by five 5- to 10-minute on-site educational presentations over a 2-year period. The introductory presentation includes information on the amount of UVR letter carriers are exposed to and UVR as a skin cancer risk factor. A case study is given of a former carrier who had a precancerous growth removed. Protection strategies and specific information about the hats and sunscreen are given. Subsequent presentations offer the following themes: (1) importance of sun safety, even in winter; (2) sun safety for the eyes; (3) sharing sun safety tips with loved ones; (4) relevance of sun safety to letter carriers of all races/ethnicities; and (5) recap and encouragement to continue practicing sun safety behaviors. The presentations are given using large flip charts with colorful illustrations tailored to letter carriers.

The primary audience for the program is USPS letter carriers.

The program is designed to be administered at postal stations.

Although not required, research staff also distributed water bottles, mouse pads, key chains, and magnetic clips imprinted with sun safety messages. Additionally, an "ask the skin doctor" poster was placed in the break room and was updated monthly with sun safety questions asked by members of the target audience and answers provided by a dermatologist.

Costs associated with the program's implementation are not provided.

Approval for all study-related procedures and materials was obtained from USPS officials (regional) and from the National Association of Letter Carriers (local, regional, and national).  To meet the required number of stations, all but two stations in San Diego County were included, and the remaining stations were those located closest to San Diego County. Employees at the remaining two San Diego stations provided input on all intervention strategies during their development. Stations were stratified by region and were randomly assigned to either intervention or control group (delayed intervention). Within each station, the researchers attempted to recruit all letter carriers to participate voluntarily in the evaluation cohort. Small incentives (valued at less than $10 each) were used to promote participation in each evaluation.

Data were collected at baseline and 3 months, 1 year, and 2 years later. At the baseline evaluation, letter carriers were unaware of their station's study group, and data collectors were blinded to group assignment. Until the completion of the 2-year evaluation, control stations received evaluation procedures only. After that, they received all components of the intervention during a 1-year period.

The primary outcomes were self-reported occupational use of (1) sunscreen with an SPF of 15 or higher and (2) wide-brimmed hats (>2.5 inches wide). These behaviors were measured at the stations via a paper-and-pencil questionnaire, which asked how often respondents had used each item while carrying mail during their past 5 workdays.

Effects on Use of Wide-Brimmed Hats While Delivering Mail 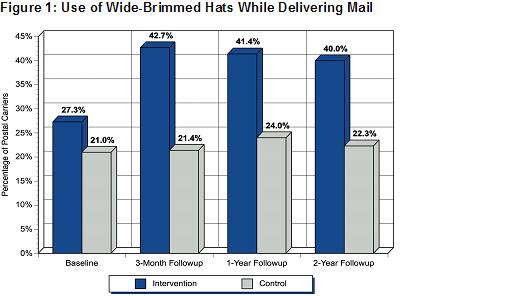 Effects on Use of Sunscreen While Delivering Mail 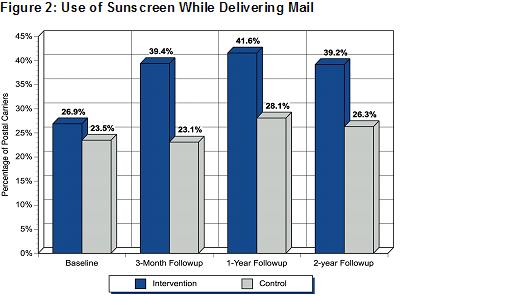