Insights from the Cancer Control Field:
Smoke-Free Homes: Some Things are Better Outside in Minnesota 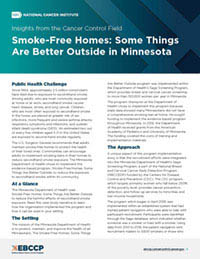 The Minnesota Department of Health uses Smoke-Free Homes: Some Things Are Better Outside to reduce the harmful effects of secondhand smoke exposure. Read this case study narrative to learn how the organization implemented the program and how it can be used in your setting.

Because a large proportion of children are exposed to smoke inside of vehicles, the Department of Health wanted to influence smoking use inside of homes and cars. Prior to program implementation, the Department of Health received permission from the program developer to include mailing inserts that promote a smoking ban inside of vehicles. The program implementer saw an increase in smokers establishing smoking bans in their cars after initiating this program.

The Department of Health had limited funding to implement this program. The organization was able to stay under budget and provide participant incentives by securing two grants and using established infrastructures. Having the assistance of patient navigators and an established database made implementation possible.

Since 1964, approximately 2.5 million nonsmokers have died due to exposure to secondhand smoke. Among adults, who are most commonly exposed at home or at work, secondhand smoke causes heart disease, stroke, and lung cancer. Children, who are most often exposed to secondhand smoke in the home, are placed at greater risk of ear infections, more frequent and severe asthma attacks, respiratory symptoms and infections, and sudden infant death syndrome (SIDS). An estimated two out of every five children aged 3–11 in the United States are exposed to second-hand smoke regularly.

The U.S. Surgeon General recommends that adults maintain smoke-free homes to protect the health of their loved ones. Communities can encourage adults to implement smoking bans in their homes to reduce secondhand smoke exposure. The Minnesota Department of Health chose to implement the evidence-based program, Smoke-Free Homes: Some Things Are Better Outside, to reduce the exposure to secondhand smoke within its community.

The mission of the Minnesota Department of Health is to protect, maintain, and improve the health of all Minnesotans. The Smoke-Free Homes: Some Things Are Better Outside program was implemented within the Department of Health’s Sage Screening Program, which provides breast and cervical cancer screening to more than 150,000 women per year in Minnesota.

The program champion at the Department of Health chose to implement this program because state data showed many Minnesotans did not have a comprehensive smoking ban at home. He sought funding to implement the evidence-based program throughout Minnesota. In 2018, the Department of Health received grants from the American Academy of Pediatrics and University of Minnesota. The funding covered the costs of training and implementation materials.

A unique aspect of this program implementation story is that the recruitment efforts were integrated into the Minnesota Department of Health’s Sage Screening Program, a part of the National Breast and Cervical Cancer Early Detection Program (NBCCEDP) funded by the Centers for Disease Control and Prevention (CDC). The CDC program, which targets primarily women who fall below 250% of the poverty level, provides cancer prevention, detection, and follow-up services to minorities and low-income households.

The program which began in April 2019, was implemented within an established system that had trained patient navigators who were able to help with participant recruitment. Participants were identified through the Sage database, which indicated whether someone was a smoker or lived with a smoker. Using data from 2013 to 2018, the patient navigators sent recruitment mailers to 3,600 smokers or those who lived with a smoker. According to the implementer, direct mail campaigns have a similar response rate to telephone recruitment (i.e., 1%). Participants were also recruited if they called the Sage program for screening services. There were 125 people who expressed interest, and 70 people were eligible to participate. Eligible participants were smokers (or individuals who lived with a smoker) without a comprehensive smoke-free home ban established (i.e., a ban on smoking anywhere indoors and inside of cars).

The Department of Health modified the implementation of the program. Due to limited funding, in lieu of conducting coaching calls, the implementer replaced the standard second mailing with a coaching letter. Per the implementation guidance, participants received the three mailings 2 weeks apart. Participants had the option to receive their program mailings via email or through the postal service.

The program was also adapted to include inserts in the mailings to encourage smokers to implement smoking bans in their cars. The inserts were designed by a communications specialist and had short messages with gripping graphics. Each participant also received the standard implementation materials (e.g., window clings, stickers, posters).

How did the program champion get the idea to use an exclusively direct mail approach for this program?

The program champion got the idea from another program on EBCCP, Using Direct Mail to Increase Screening Mammography, developed by Jonathan Slater. The program champion knew of the effectiveness of this intervention and decided to apply the same approach to Smoke-Free Homes. The direct mail approach fit the organization’s budget better, and the evaluation still saw positive results.

How did the program champion choose an evidence-based program when there are so many to choose from?

The program champion looked to see what programs were available that were effective, scalable, and appropriate for the organization’s budget.

To learn more about Smoke-Free Homes: Some Things Are Better Outside and how to use the program at your organization, view the program summary at: https://ebccp.cancercontrol.cancer.gov/programDetails.do?programId=28303637