Designed to increase the level of physical activity and number of people using parks, this community-based intervention works with parks that have advisory boards to identify and implement new park programming and outreach interventions. The study showed an increase in the number of park users and in energy expenditure.

For inquiries related to staff training or program implementation, please contact Terry Marsh at: tmarsh@rand.org or at 310-393-0411.

Insufficient physical activity is a significant risk factor for obesity, overweight, cardiovascular disease, and stroke. Physical activity guidelines advise adults to engage in a weekly minimum of 150 minutes of moderate-intensity aerobic activity (e.g., brisk walking) or 75 minutes of vigorous-intensity aerobic activity (e.g., jogging) along with muscle-strengthening activities at least 2 days each week, with adjustments made for older adults with chronic conditions and a low level of fitness. Only 20.8% of U.S. adults meet these physical activity guidelines. Adults may find it difficult to maintain an active lifestyle because of work hours, sedentary occupations, time spent using technology, and available mass transportation. Public parks may offer a setting and opportunity to increase physical activity in the community, since many exist throughout cities and towns. Park-based interventions can provide a venue for park visitors to engage in a variety of activities (i.e., walking, biking, strength training) to maintain a healthy lifestyle and reduce negative health risks.

Increasing Park-Based Physical Activity Through Community Engagement aims to increase the number of people using parks and their level of physical activity while using the parks. Grounded in community-based participatory research principles, the program takes place within parks that have an existing park advisory board (PAB) comprising local residents and a park director. The PAB and park director use data collected on park use to identify and implement programming and outreach interventions to foster park use and park-based physical activity. A manual guides the five key phases of the program:

-- Community engagement and planning. During this phase, the PAB and park staff participate in initial planning meetings to discuss project goals and timelines. Throughout the project, the PAB advises on data collection tools, helps interpret collected data, and designs and tracks park interventions.

-- Baseline park assessment. An assessment of the park is conducted using observations of park use and interviews of park users and local residents. Promotoras (Spanish- and English-speaking community health workers) observe the park and use the System for Observing Play and Recreation in Communities (SOPARC) tool to note characteristics of the park (e.g., accessibility, usability, supervision, organization) and its users. Promotoras also administer a 44-item survey to park users and local residents to gather information on the characteristics, interests, and needs of park users and potential users.

-- Data interpretation and intervention development. After the baseline assessment, the park director and PAB meet several times to discuss the findings of the assessment and develop park-specific interventions.

-- 1-2 years to implement the intervention

The intervention targets park users and local community residents who have not used the park.

The intervention is suitable for use in a community setting.

A randomized trial conducted in collaboration between the Los Angeles City Department of Recreation and Parks and RAND Corporation tested the effects of the intervention. Of 183 neighborhood parks in the city of Los Angeles, 51 were selected to participate based on their diverse racial and ethnic population. During randomization, 17 parks were assigned to each of 3 study arms: a park director (PD)-- led intervention arm in which the PD did not have to consult with the PAB about the project, a combined PD/PAB-led intervention arm in which the PAB was involved in and came to consensus on all phases of the project, and a control arm. (Subsequently, 1 of the 17 PD/PAB parks decided not to participate.) Parks were randomized based on park size, number of facilities and programs offered, and the sociodemographic characteristics of the population within a 1-mile radius. Ten parks were located in neighborhoods with the highest percentage of Hispanics, 10 with the highest percentage of African Americans, 10 with the highest percentage of Asians, and 11 where the distribution of any one racial or ethnic group was not more than 50% of the population and was not already included in the previous listing of neighborhoods.

Parks were systematically observed four times a day for 7 days at baseline between April 28, 2008, and March 20, 2010, and at follow-up between April 27, 2010, and April 2, 2012. Park observations were conducted using the SOPARC method. During each observation, target areas within the park were coded to note organized activities and park user counts by observed gender, age group, race/ethnicity, and physical activity level. Levels of physical activity were translated to a measure of energy expenditure (METs), with 1.5 METs assigned for sedentary activity (e.g., sitting, standing), 3.0 METs assigned for moderate activity (e.g., walking), and 6.0 METs assigned for vigorous activity (e.g., running, jogging). 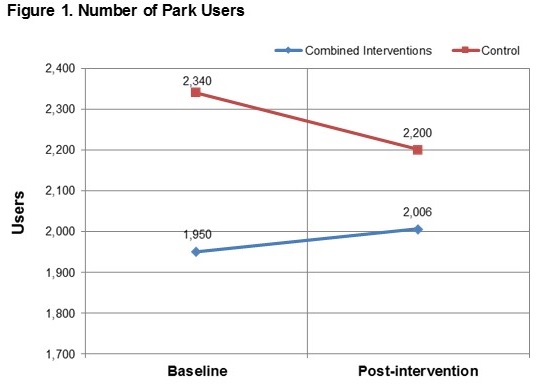 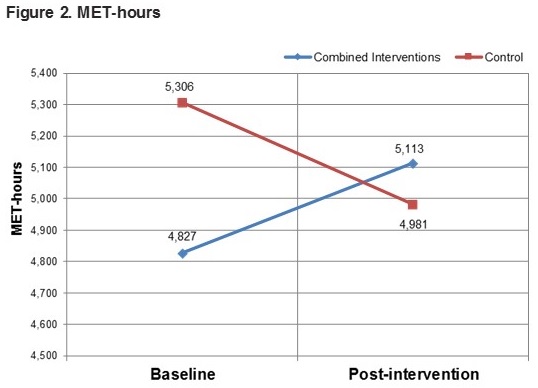 NCI does not endorse nor recommend any commercial products, processes, or services, nor do they guarantee the success of programs made available on the site. The views and opinions of authors expressed on this website do not necessarily state or reflect those of the NCI, and may not be used for advertising or product endorsement purposes. Rather, the information is provided to help you make an informed decision about the best program options to meet your cancer control needs. Please see the disclaimer for further information.