Designed to enhance knowledge in the decision-making process for prostate cancer screening, this intervention is a web-based decision aid that includes introductory material on the prostate gland, a review of screening and treatment options, a review of risk factors and the importance of making a decision with a doctor, a tool to help the user assess his own preferences, and additional resources. The study showed increased knowledge about prostate cancer and decisional satisfaction with screening as well as decreased decisional conflict about screening.

Screening tests for prostate cancer are available, yet there are some growing concerns regarding the benefits of screening due to the potential for over-diagnosis and over-treatment of patients. Screening may not be appropriate for all men for a number of reasons. First, because most forms of prostate cancer grow slowly (or not at all), they often do not cause any health problems. Consequently, screening will not help all men with prostate cancer live longer. Second, no single standard screening test exists for prostate cancer, and the tests available have limitations and sometimes provide inaccurate results. When results appear to be normal but cancer is present (a false-negative test result), a patient may delay seeking medical care even if he has symptoms. When results show cancer is present but it is not (a false-positive test result), a patient may experience anxiety and unnecessarily undergo additional tests. Further, there are risks associated with follow-up tests and treatment. Should a patient undergo a biopsy as a follow-up to screening, he may experience fever, pain, bleeding, and infection. The treatments for prostate cancer may cause serious side effects, such as urinary, bowel, and sexual problems.

Because of concerns about the benefits of screening relative to the risks, the U.S. Preventive Services Task Force recommends against routinely screening asymptomatic men, leaving the decision to patients and their doctors, while other medical organizations offer conflicting recommendations about screening some or all men over age 40. To help patients understand the risks and benefits of screening, weigh their options, and make a decision consistent with their preferences, the Centers for Disease Control and Prevention recommends that men participate in informed decision making with their doctors. Tools designed for men of all ethnic groups are needed to assist men in deciding whether screening is right for them.

Prostate Cancer Screening: Making the Best Decision is a self-guided, web-based decision aid to help men aged 50-70 decide whether to undergo prostate cancer screening. The intervention aims to increase knowledge on prostate cancer and the risks and benefits of screening, reduce the uncertainty or decisional conflict associated with making a choice about screening, and increase satisfaction with that choice, with the hope that men will make the best decision for themselves.

Eligible men are identified for participation by their health care provider or a community organization and receive information on the intervention (including the web address) in person or by mail. The six sections of the decision aid include introductory material about the prostate gland, a description of screening options and their benefits and limitations, a review of treatment options (e.g., early treatment, watchful waiting) and their risks and benefits, a review of prostate cancer risk factors and the importance of making a decision in conjunction with a doctor, a 10-item values clarification tool to help the user assess his own preferences, and resources for more information (e.g., sources for statistics and research, national organizations that can provide more information about prostate cancer screening and shared decision making that includes the patient and doctor). The decision aid stresses that that there is no right or wrong decision about whether to undergo screening; each man needs to make a decision for himself based on available evidence and his own preferences.

Users can advance through the web pages in order or use a table of contents for nonlinear navigation. The web content is presented in written text and voice-over, and the site uses animation, graphics, clickable fields through which the user can access additional information (e.g., definitions, links to other websites), and video testimonials. The web pages presenting the 10 questions of the values clarification tool are interactive, and the responses shown together visually illustrate how the user's values align with a decision to screen or not. The aid also includes a printable list of questions men can ask their doctor.

Users receive the web address for the decision aid, instructions for using the website, instructions for troubleshooting problems with the site, a list of local Internet access locations, and a phone number they can call if they encounter technical problems.

The time needed to review the decision aid is approximately 30-50 minutes.

The intervention is for men aged 50‒70.

The intervention can be used in clinical settings, community centers, or in the participant's home.

A randomized clinical trial was conducted to compare two decision aids (the web-based intervention and a print-based version that contained the same information) with usual care among racially diverse males in the Washington, DC, metropolitan area. Eligible participants were 1,879 males aged 45-70 recruited from three health systems: Georgetown University Hospital, Washington Hospital Center, and MedStar Physician Partners. They were required to have no history of prostate cancer, speak English, have the ability to provide informed consent, be living independently, and have had an outpatient appointment in the 24 months before study enrollment. The study sample was 56.2% White, 39.9% African American, and 3.9% "other."

After receiving a recruitment letter by mail, men who expressed interest in participating in the study were asked to complete a 20-minute baseline telephone interview with a study interviewer. The interview collected baseline data on outcome variables as well as demographic data, clinical information, and information about prior screening. Participants were randomly assigned to one of the three groups to receive the web-based decision aid, print-based decision aid, or usual care. Randomization was stratified by site and self-reported race (White, African American, or other). Upon assignment to study condition, those assigned to the print-based intervention group received the print-based decision aid. Participants in the web-based intervention group received the intervention's web address, secure login information, a troubleshooting guide, and a list of locations providing free Internet access. Follow-up assessments were conducted by interviewers 1 and 13 months after randomization. All participants received a $10 gift card after the first follow-up assessment and a lottery entry for a $100 or $200 gift card drawn for every 50 participants after completion of the final assessment.

-- Prostate cancer knowledge was assessed at baseline and 1 and 13 months after randomization using an 18-item true/false scale with items addressing prostate cancer testing, the lack of clear guidance about the need for screening, risk factors, the benefits and limitations of prostate cancer treatment, and the disease's natural history. Scores ranged from 0 to 18, with higher scores reflecting greater knowledge.

-- Decisional conflict was assessed at baseline and 1 and 13 months after randomization using a 10-item scale. Scores ranged from 0 to 100, with higher scores indicating greater decisional conflict.

-- Receipt of prostate cancer screening was assessed at 13 months through participant self-report of having a prostate-specific antigen (PSA) test and/or a digital rectal examination (DRE) during the 1-year study period.

Unlike the Web-based decision aid, the print-based aid has not been updated with the current screening guidelines, making it unsuitable for dissemination. 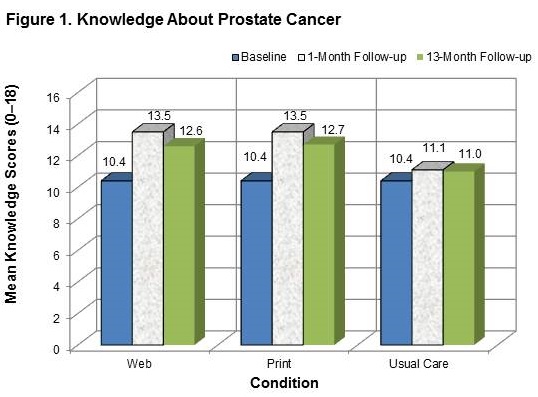 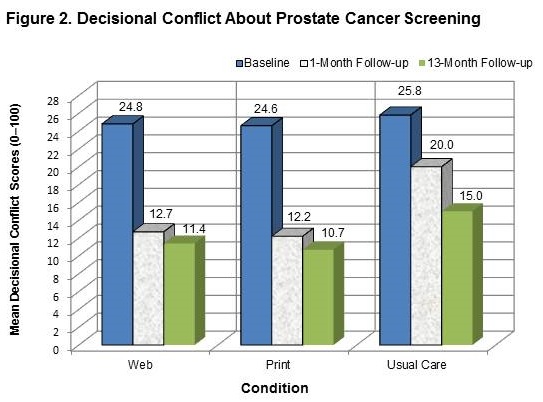 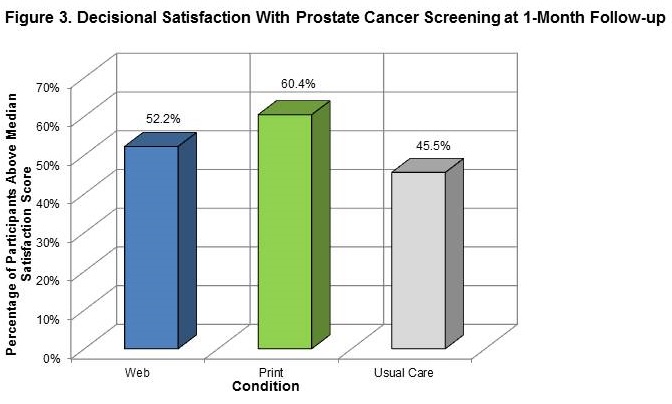