African-American men are more likely to have friends and family members affected by prostate cancer. There are also many messages in the media and medical community that favor screening. As a result, African-American men may believe strongly in the benefits (and lack of risks) of prostate cancer screening. However, there is also a strong social stigma attached to the exams and cancer screening in general, so this may cause conflict. It is therefore a challenge to communicate the controversy surrounding screening. To date, much information about men's understanding of the controversy and the development of effective methods for communicating the controversy have been developed using samples of primarily White men. It is important to develop effective messages that readily reach African-American men, conveying information from trusted experts regarding the pros and cons of prostate cancer screening and encouraging discussion within social networks. This approach can facilitate informed decisions regarding the appropriateness of screening for the individual.

In the Prostate Health Awareness Project, an educational intervention, participants are mailed packets of materials designed specifically for African-American men presenting balanced information on the risks and benefits of prostate cancer screening. The materials do not provide recommendations for or against screening, and they do not include information about local prostate cancer screening locations. Rather, they encourage men to reach their own decisions in collaboration with their physicians and family members.

The materials include a printed 16-page booklet and a video. The booklet includes information on prostate cancer symptoms, anatomy and function of the prostate, prostate cancer risk factors, risks and benefits of screening, sample questions for men to ask their doctors, and a glossary of terms. The 25-minute video features a story about a middle-aged African-American man as he discusses prostate cancer screening with his friends, family, and physician. The story portrays his journey to understand the pros and cons of screening through his discussions. In the doctor's office, he is shown diagrams of the prostate and given rationale for and against screening. In addition, both the booklet and video feature Frank Robinson - not only a National Baseball Hall of Fame ballplayer and the first African-American manager of a major league baseball team, but a prostate cancer survivor as well.

To administer the Prostate Health Awareness Project, time is required for:

- Program coordinator to send materials (i.e., creating a packet by putting the booklet or DVD in an envelope, addressing it, adding postage, and mailing it); approximately 5 minutes per packet

- Participants to read the 16-page printed participant guide, 15-30 minutes, depending on the individual reader

- Participants to watch the DVD, 25 minutes

The Prostate Health Awareness Project is designed to be administered to participants in their homes, community-based, or clinical settings.

Participants included 238 African-American men, aged 40-70, who were members of the Most Worshipful Prince Hall Grand Lodge in Washington, DC, which consists of 27 lodges, each with 100 or more members. To be eligible, the men could not have participated in the focus groups when intervention materials were developed, and they could not have a history of prostate cancer. Participants were recruited between January 2001 and August 2002. Within each lodge, a coordinator (who was paid $50 for his assistance in recruiting participants) helped to identify potential participants. A research assistant followed up to enroll the eligible men and conduct the baseline interview.

Following completion of a baseline interview, participants were randomly assigned to one of three study arms: (a) video-based information, (b) print-based information, or (c) wait-list control. Participants in the print and videotape arms of the study were mailed a cover letter, the intervention materials, and the written consent form. The cover letter included a statement about the rationale for the study, length of time needed to watch the video and read the booklet, instructions for returning the consent form, a reminder about the 1-month follow-up interview, a request to not share the intervention materials with other Masons (to prevent contamination of the control group), and phone numbers to call for more information. 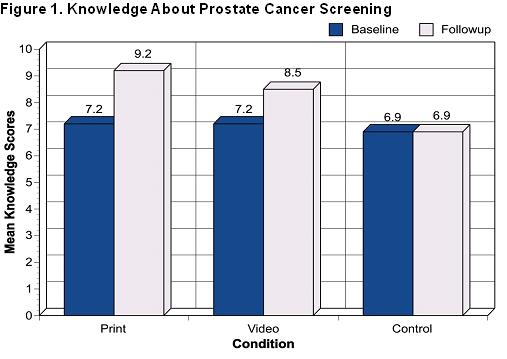 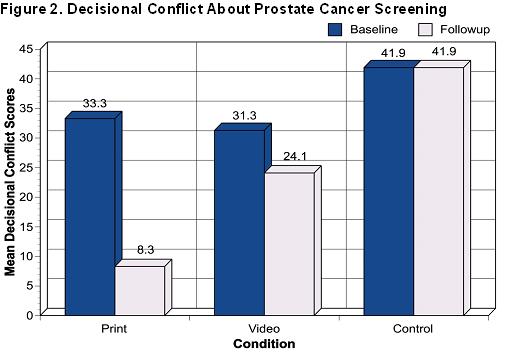