For inquiries related to staff training or program implementation, please contact Carolyn Fang at: carolyn.fang@fccc.edu or 215-728-4062.

Each year in the United States, approximately 12,000 women get cervical cancer. Screening can detect cancer at an early stage when treatment can be most effective and can also detect abnormal cells that may become cancerous if not treated. The U.S. Preventive Services Task Force recommends regular screening for cervical cancer for women aged 21 to 65 using the Papanicolaou (Pap) test, with the goal of preventing cancer and cancer deaths.

The Gateway to Health: A Cervical Cancer Screening Program for Korean Women is an intervention for Korean American women that aims to increase their screening rates for cervical cancer. Based on the health belief model and social cognitive theory, the intervention addresses the individual beliefs and expectancies regarding cervical cancer screening, as well as the health care access barriers, experienced by many Korean American women. Beliefs include perceived risk of developing cervical cancer, perceived benefits and barriers to screening, and social and cultural norms regarding screening. Barriers that might affect access to care include lack of translator services within health care settings, lack of insurance, and insufficient knowledge of the U.S. health care system.

The intervention is implemented within Korean American churches (an integral part of many Korean American communities) by trained bilingual community health educators. For the first part of the program, the health educator teaches a single 2-hour, small-group education session with 15-20 participants. Guided by an intervention curriculum and using PowerPoint slides, the health educator addresses cervical cancer risk factors, screening guidelines and procedures, potential screening barriers that are relevant to Korean American women, and follow-up and clinical management if a Pap test results in abnormal findings. Participants also receive information on how to obtain free or low-cost screening. After the education session, the health educator asks participants if they are interested in receiving one-on-one navigation services. Participants have the option to enroll in program navigation services or get help from family and friends. For women who engage in navigation services, health educators assist with scheduling appointments, arranging transportation, completing paperwork and forms, managing referrals, and linking with other agencies and programs as needed. Six months after the educational session, all participants receive a reminder letter. The letter instructs participants to call their health care provider to schedule a Pap test or to call the program staff for assistance if they have not already undergone screening.

-- 10-15 hours for the bilingual health educator to receive training
-- 2 hours to deliver the education session to participants
-- Variable time spent with participants for navigation services, depending on participant need
-- Time to prepare and send reminder letters to participants

The intervention is intended for Korean American women.

The intervention is designed to be implemented in religious establishments in community settings.

A two-arm, group-randomized controlled trial tested the effect of combined community education with navigation services on cervical cancer screening among Korean American women. This study involved 22 Korean churches in southeastern Pennsylvania and New Jersey between February 2009 and December 2014. Participants were recruited within the churches and were eligible to participate if they self-identified as being of Korean ethnicity, were at least 21 years old, were not adherent to current Pap test guidelines, and had no current or prior diagnosis of cervical cancer or other cervical abnormality. Using a matched-pair design, researchers stratified the churches by size and geographic location. Randomization occurred at the site level, with 11 churches enrolled in the intervention group and 11 enrolled in the comparison group. Comparison group churches received a 2-hour education session delivered by bilingual health educators on general health and cancer education (e.g., tobacco, nutrition, routine medical check-ups, screening for cervical and other cancers, health care sites offering free or low-cost cervical cancer screening).

The intervention churches had 347 participants, and the comparison churches had 358 participants. The average age of participants was 51.9 and 53.9 in the intervention group and comparison group, respectively. Forty percent of participants had a high school education or less, >72% did not speak English well or at all, 97% were born outside of the United States, 52% were employed, 79% were married, and 51% did not have health insurance. The two study groups did not differ significantly on education level, English language speaking ability, employment status, birth in the United States, or mean number of years living in the United States. But, there were significant differences between groups in participant age, marital status, having health insurance, having a regular physician, and having ever had a Pap test. 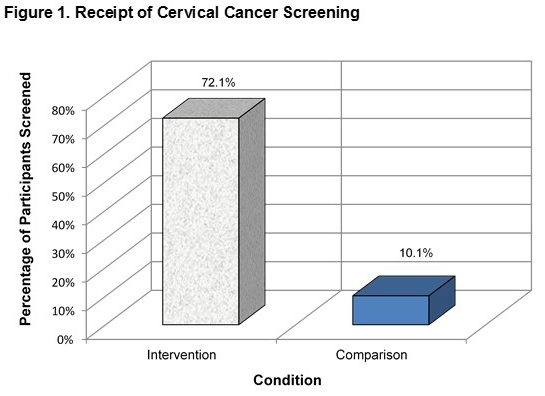 
(Be the first to write a review for this program)
Browse more Cervical Cancer Screening programs
NCI does not endorse nor recommend any commercial products, processes, or services, nor do they guarantee the success of programs made available on the site. The views and opinions of authors expressed on this website do not necessarily state or reflect those of the NCI, and may not be used for advertising or product endorsement purposes. Rather, the information is provided to help you make an informed decision about the best program options to meet your cancer control needs. Please see the disclaimer for further information.