Now reaching epidemic proportions, obesity leads to conditions with high rates of illness and death. According to the American Medical Association, obesity and being overweight have led to increases in several diseases. Conditions include type 2 diabetes, cardiovascular disease, several types of cancer (endometrial, postmenopausal breast, kidney, and colon), musculoskeletal disorders, sleep apnea, and gall bladder disease. More than 20 percent of adults are clinically obese, as defined by a body mass index (BMI) of 30 or higher, and an additional 30 percent are overweight, having a BMI between 25 and 29.9. There is a strong need for interventions to improve diet and health, including reduction of gastro-esophageal reflux disease (GERD), osteoporosis, diabetes, high blood pressure, kidney stones, high cholesterol, prostate cancer, stomach and esophageal cancers, headaches, and coronary heart disease.

The DINE Healthy program is a computer software program that provides an approach to understanding nutrition with the goal of achieving improved health. Based on the Activated Health Education (AHE) model, the program helps individuals plan their diet, lose or maintain weight, improve health, and achieve energy balance.  AHE advocates that for individuals to change their behavior through educational efforts, three basic strategies need to be applied. The participants should:

The DINE Healthy software program is used by home users and health professionals for the purpose of recording present health habits (i.e., food choices, eating behavior, and physical activity) on a computer using a user-expandable database that contains 10,000 food items and over 100 nutrients. The exercise component tracks caloric expenditures based on 500 sports, leisure, and recreational activities, and calculates the calories burned. The patented DINE Scoring System (U.S. Patent #5,412,560 - Method for Evaluating and Analyzing Food Choices) evaluates food choices, quantifying how well or how poorly the user is eating and provides recommendations for healthy eating and exercise. Components of the program include the DINE Healthy software, DINE Healthy Curriculum Guide, Eating and Fitness Excellence book, "Play to Win" self-help surveys, microcomputer-based labs and reports, and a self-management contract.  Based on user input, the DINE Healthy software tracks:

Time required for implementing the DINE Healthy program varies by the target audience.

For Senior Citizens:  The nutrition program involves four 60-minutes classes over a period of 2 weeks. Additional time would be needed to use the software daily to record and analyze their food intake.

For Worksite Employees: The nutrition education program consists of eight 1-hour weekly sessions. These include a computerized diet and exercise assessment. In addition, analysis time on the computer is needed. The Eating and Fitness Excellence (EFE) curriculum guide consists of five lessons, approximately 45-50 minutes each, with additional integrated extensions for homework and related activities.

The DINE Healthy program is targeted to senior adults aged 63-85 and adults aged 33-59 in the workplace.

The DINE Healthy program is suitable for implementation in homes, worksites, and community centers.

The cost of the DINE Healthy system depends on the license and installation type chosen. Costs range from $129 for a "Stand alone" license with one station (grants use of the software to a single computer) to $1,195 for a "Client Server" license with 100 stations (the software is activated on the server and allows 100 computers to access the software at a time). Users who have a previous version of DINE Healthy are eligible to upgrade at a discount.

The DINE Healthy Program was funded by the Small Business Innovation Research (SBIR) Program and was tested in two phases:

Phase I was a three-arm study that used two experimental groups (nutrition program with computer interaction, nutrition program without computer interaction) and one control group (no program or computer interaction) with 1-month follow-up measures. Senior citizens, aged 63-85 (29 women; 2 men) residing in subsidized housing or having membership in a subsidized community center participated. Data consisting of three 1-day food records were collected for each senior at a half-hour interview each day for 3 days at baseline and at 1-month follow-up.  Eight nutritional values were assessed: energy, protein, saturated fat, polyunsaturated fat, monounsaturated fat, complex carbohydrates, sugar, and calcium.

Phase II used a nonequivalent control group, quasi-experimental design with two experimental groups (nutrition education program with direct interactions with a personal computer, and nutrition education program with no computer interaction)  and one control group with a 10-week post-program assessment. Employees from two automobile manufacturing plants participated: 51 men and 8 women, aged 33-59.  The employees from Plant 1 were randomly assigned to one of the two experimental groups while employees from Plant 2 were assigned as the control group.  They were 20-35 percent above their desirable weight. Eighty-one percent were White and 19 percent were African American. Weight loss was assessed by measuring body weight using standardized protocols, while nutrient intake was assessed using a 3-day self-report food record with interview.  Seven nutrients were assessed: total calories, fat, dietary fiber, protein, carbohydrate, added sugar, and sodium.

Phase II
The effectiveness of the intervention on workplace participants' dietary content was examined by combining the two experimental groups. 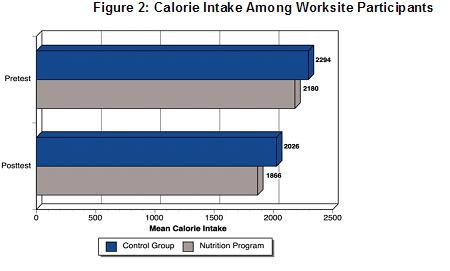 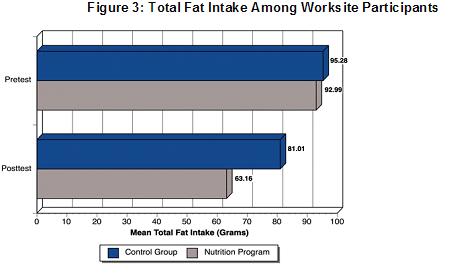 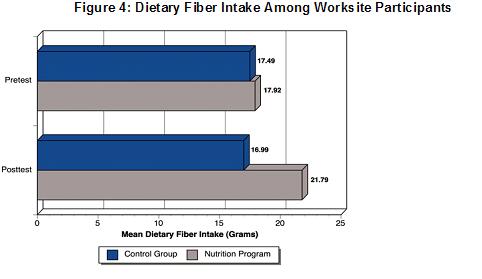 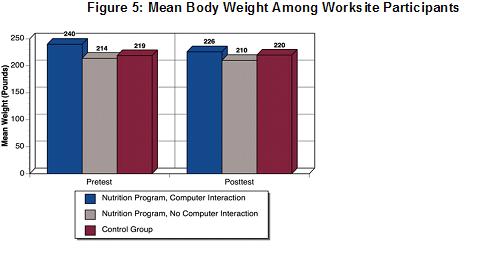 While an effect was observed in Phase II of the study there was no comparison with the non-computerized nutritional program from Phase I.  The findings are still preliminary regarding the effectiveness of the computer-assisted component of the nutrition education program.