Designed to increase awareness and sun protection behavior and practices among mothers with a child under age 2, this intervention consists of a single telephone counseling session facilitated by a health educator and two newsletters on sun protective practices that are tailored to the mother’s sun safety educational needs. The study showed an increase in sun protection use.

It is estimated that up to 80% of an individual's cumulative sun exposure occurs before age 18. While the numbers of fatal skin cancers are rapidly rising, children are still sunbathing. Because most skin cancer is the result of childhood sun exposure, there is a need to educate families early on about the importance of sun protection.

Skin cancer is preventable: Incorporating safe sun practices into the early years can reduce nearly 80% of skin cancers. Most sun protection messages delivered to date, however, have targeted older children, with few messages aimed directly at parents of neonates, infants, and toddlers. At this early stage, most parents have not yet instilled health habits in their child. With an early start, parents can help their children to develop lifelong sun protection habits.

Raybusters is a sun protection education program targeted at mothers of at least one child under 2 years of age. The program encourages mothers to practice sun protection for their infant/toddler, themselves, and other young children in the family. The program consists of a single telephone counseling session and two personalized mailings.

Raybusters is designed to promote sun protective behaviors with-

The Raybusters program requires administration of the baseline survey via phone, creating, assembling, and mailing the customized newsletters, and a single telephone counseling session, taking at least 15 minutes, provided by a health educator.

The Raybusters program is designed to be introduced to new parents post-delivery in the hospital, with the actual administration of the program taking place at home via telephone calls and mailings.

Mothers giving birth in Falmouth Hospital, Falmouth, Massachusetts, during the first 6 months of 1998 were approached to participate in a study testing the effectiveness of sun protection education during the following 12 months. At that time, all new mothers were counseled by maternity nurses on sun protection for their newborns. Mothers who agreed to participate were randomly selected to receive hospital education alone or hospital education plus tailored materials and telephone counseling.

Participating mothers completed baseline surveys conducted by the health educator in September and October 1998 to determine their sun-protective practices and attitudes toward sun exposure and tanning. Their infants ranged in age from 3 to 9 months at that time. Participants were then randomized to intervention and control groups. Beginning in the spring of 1999, mothers in the intervention group received a 15 minute telephone call from the health educator and were mailed two newsletters, which were customized to address the mother's educational needs identified in the baseline survey. The telephone call and newsletters addressed: the health benefits of sun protection; specific instructions for use of sunscreen and protective clothing; solutions to mothers' specific questions about sun protection; and personalized sun protection suggestions.  One year after completing the baseline surveys, mothers in both groups completed follow-up surveys assessing their experiences during their child's second summer.

Effect on Mothers' Vigilance in Sun Protection
Vigilant sun protection,* measured only at follow-up, was 82% in the intervention group compared with 61% in the control group (p<.05). 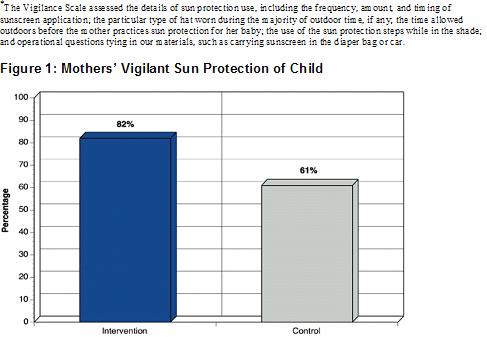 Additional Effects of the Raybusters Intervention
While higher vigilance scores in the intervention group indicate that the intervention had positive effects, some individual sun protection behaviors showed null or negative results from baseline to follow-up.  However, it is possible that this is due to the developmental stage of the children from baseline to follow-up - mothers have greater control over the sun protection process when their children are infants as opposed to when they are toddlers.  As the researchers point out, these findings may be due to their toddlers being mobile and more independent, contributing to mothers' difficulties in keeping sun-protective clothing on their children.

Given this, although not significant, the following results are reported:

Effects on Mothers' Sun Protection Knowledge Scores
Sun protection knowledge scores at follow-up were 46% among intervention mothers compared with 35% of the control mothers.