Insights from the Cancer Control Field

See how implementers have used this program in the field

Skin cancer is the most commonly diagnosed form of cancer in the United States, accounting for an estimated 1.3 million new cases of cancer each year. The incidence rate of melanoma, the most deadly form of skin cancer, has more than doubled since the early 1970s. There will be an estimated 13,590 deaths from melanoma and other non-epithelial skin cancer in 2007. It is widely known that protection from the sun's rays could prevent about 90 percent of all skin cancer cases. Youth are most at risk for overexposure to ultraviolet radiation (UV rays) because they spend the most time outdoors in the sun. It is estimated that 80 percent of lifetime UV exposure is received during childhood. Those who receive the most overexposure to the sun (tanning and burning) tend to have the highest rates of skin cancer later in life.

The POOL COOL program is a multi-component sun-safety education program especially designed for use at swimming pools. Its main objective is to increase awareness, motivation, and sun protection practices among children aged 5-10 who take swimming lessons, parents of the children, pool staff, and other pool users.

The POOL COOL Program teaches children about the dangers of overexposure to the sun and encourages them to develop healthy habits for a lifetime. Lessons are taught in conjunction with regular swimming lessons, with the curriculum combining education, interactive activities at the pool, and pool-wide environmental changes. The main components are:

The POOL COOL Program consists of a total of eight lessons, each taking no more than 5 minutes at the start of swim class. The program also contains five additional sun-safe poolside activities that can be conducted with kids when there is more free time available.

In addition, a one hour orientation and training was provided to pool staff.

The amount of time required to plan for and implement sun safety policies and environmental changes varies depending on how many of these components a pool implements.

The primary audiences for the POOL COOL intervention include children aged 5-10 taking swimming lessons at participating pools, their parents (or caretakers), and the aquatic staff.

The POOL COOL program is especially designed for use at outdoor swimming pools.

For swimming pools that are not already participating in the POOL COOL research study, materials can be downloaded for free from the Pool Cool website (https://www.med.upenn.edu/poolcool/) or purchased from the National Recreation and Park Association (www.nrpa.org).

The POOL COOL Program was evaluated using a cluster randomized controlled design to assess the impact of the program on sun-protection habits and swimming pool environments. The POOL COOL Program was compared with a program similar in format, with injury prevention as the topic. Both educational and environmental strategies were tested in 28 swimming pools in Hawaii and Massachusetts. A total of 1,010 parents/caregivers completed baseline surveys regarding themselves and their children, aged 5-10 years (mean age 6.6 years), who were enrolled in swimming lessons. Children were 47.1% female and 52.9% male, and 57.2% of parents/caregivers identified themselves as Caucasian.

Parents completed surveys concerning themselves and their children about skin cancer risk factors, knowledge about skin cancer and sun-protection guidelines, attitudes, and policies for sun protection at the swimming pool. Surveys were completed at the beginning of the summer and approximately 8 weeks later, near the end of the swimming lessons season. POOL COOL research staff conducted observations at the beginning, middle, and end of the summer to ascertain structural and environmental changes, including the sun-safety environment (availability of sunscreen, shaded areas, and sun-safety signage) and lifeguard sun-safety practices (wearing hat, shirt). Findings for the main targeted outcomes are presented below.

*The composite sun protection habit score was created from five protective behaviors (using sunscreen, wearing a hat, wearing a shirt, seeking shade, and wearing sunglasses) on a 4-point scale ranging from 1 (rarely/never) to 4 (always), adding the responses for each behavior and dividing by the number of items answered to obtain a summary score, ranging from 1 to 4. 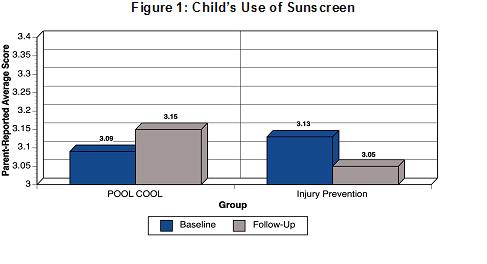 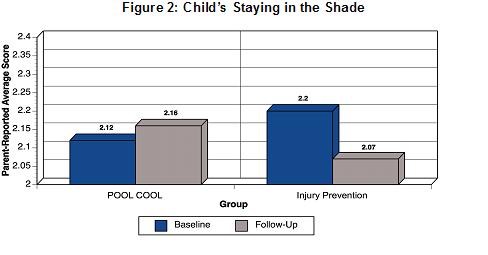 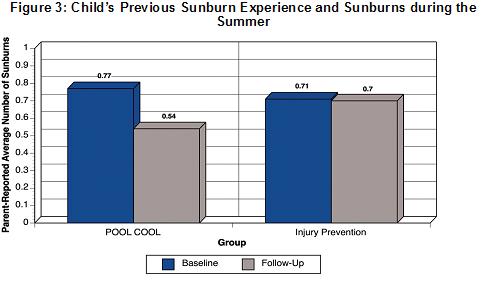 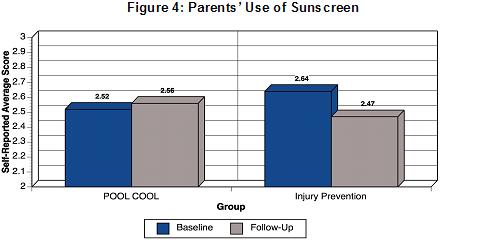 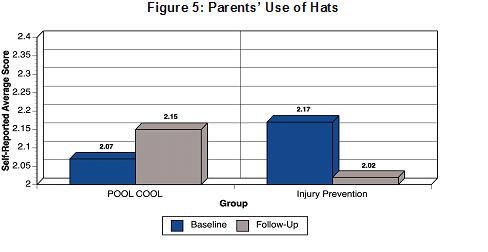 At follow-up, the POOL COOL group parent surveys showed substantially greater increases in sun-protection policies at their pools compared with the injury prevention group: 2.59 compared with 1.67, or 55.1% higher on a scale of 0 to 4 (p<.001). 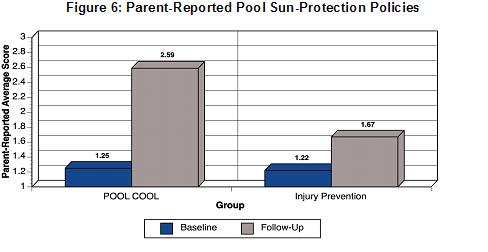 Observational Findings of Changes in Sun-Safety Environments and Lifeguard Sun Protection
Pools in the POOL COOL trial had greater improvements in posting of sun-safety signs (p<.01), availability of sunscreen (p<.05), and lifeguard shirt use (p<.01). 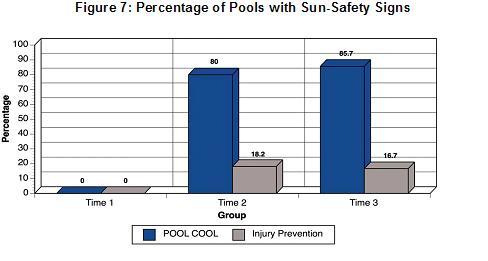 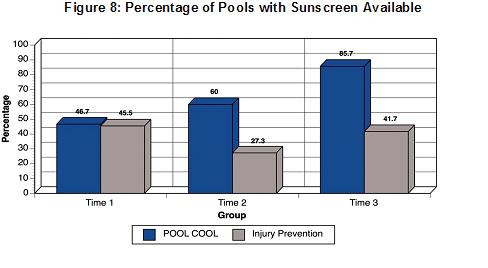 Dose-Response Effect of the POOL COOL Intervention
There was a significant dose-response effect on Sun Protection Habits for children receiving two or more lessons or activities compared with those whose parents reported that they received zero or one (p<.05). 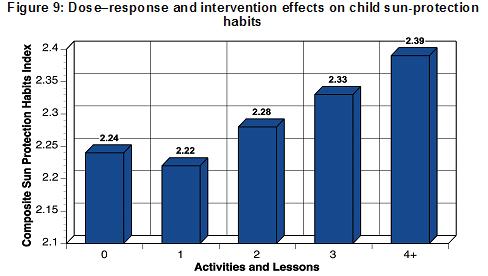 Block the Sun, Not the Fun

Together for Sun Safety