Designed to increase sun protection behavior and reduce sun exposure among children and their caregivers during visits to the zoo, this intervention uses several dissemination strategies (e.g., a sun safety tip sheet for caregivers, a stamping activity sheet for children, coupons for hats and sunscreen, sun safety reminder signs) to encourage zoo patrons to use sun safety items and purchase them at the zoo if needed. The study showed increased sales of sunscreen and hats from zoo gift shops and greater use of hats.

The rates of both melanoma and non-melanoma skin cancers have been increasing in the United States. Exposure to ultraviolet radiation (UVR) is a key risk factor, and much of this exposure is obtained prior to adulthood. Consequently, primary prevention programs to promote sun safety for children and their caregivers are particularly warranted.

Each year, millions of children visit zoological parks, where they are exposed to UVR for long periods of time. Yet a 1998-1999 survey of accredited U.S. zoos conducted by the developers of Sun Safety Among Zoo Visitors found that only 5% of zoos offered any sun protection recommendations to their visitors. Therefore, zoo visitors would benefit from a combination of structural (e.g., shade, availability of sunscreen) and educational interventions.

The program uses several strategies to disseminate the message of sun safety behaviors and encourage the use of protective clothing and sunscreen, including: (1) a sun safety tip sheet for parents inserted in the zoo maps distributed to visitors at entry; (2) a stamping activity sheet for children on the flip side of the tip sheet; (3) coupons for discounts off the purchase of selected children's hats (i.e., targeted hats providing ideal amounts of shade) and sunscreen in zoo gift shops, attached to the tip sheet; (4) point-of-purchase signs in gift shops prompting visitors to purchase hats and sunscreens; (5) signs at selected animal exhibits about sun-protective adaptations; (6) incorporation of information on animal adaptations by bus tour narrators; (7) sunscreen reminder signs in restrooms; (8) sun safety reminder signs at stroller rental and bus and tram loading areas; and (9) thematically relevant children's arts and crafts activities. The theme of the program is animal adaptations for skin protection, such as elephants dusting their skin to prevent sunburn and meerkats having dark under-eye circles to prevent glare.

The stamping activity is a matching exercise in which children match five animals to five clues that explain how the animal protects itself from the sun's burning rays. At five corresponding animal exhibits, kiosks are installed with answers to the clue, a stamp with the appropriate animal, and an inkpad. As children visit each exhibit, they learn about the protective strategies and fill out the stamping sheet with the animal stamps. The arts and crafts activities, which were conducted in the Children's Zoo and staffed by zoo volunteers and staff and project staff, consisted of decorating a picture of an elephant with sand and grass and creating a wide-brim frog hat.

The time required to administer the program includes 30 minutes to train zoo employees to incorporate narrations about animal adaptations during bus tours and learn how to integrate animal adaptations into arts and crafts activities. In addition, approximately 3 hours are required for the posting of sun safety messages (e.g., installing kiosks, signs, tip sheets, and coupons) in various areas of the zoo.

The primary audience is children ages 12 years and younger and their caregivers during zoo visits.

The program is designed to be administered at zoological parks.

The Promoting Sun Safety Among Zoo Visitors websites include the following materials:

The evaluation was conducted at two sites in southern California, with a winter study beginning in January and a summer study beginning in July. The intervention site was the San Diego Zoo, located near downtown San Diego. The comparison site, which received only the evaluation procedures, was the San Diego Zoo's Wild Animal Park, which is located in a relatively rural area approximately 29 miles from the zoo. The sites are operated by the same zoological society and sell similar items in their gift shops.

A nonequivalent control group design was used to evaluate the effects of a multi-component intervention on hat wearing by children and on the purchasing of sunscreen and select hats in gift shops. During the winter study, data were collected for a consecutive 10-week period. The first 4 weeks consisted of evaluation only at both sites (baseline phase), during which time the researchers documented hat and sunscreen use. This was followed by a 6-week period of intervention at the zoo only, with continued evaluation at both sites (intervention phase). The summer study consisted of 4 weeks each of a baseline and intervention phase, for a total of 8 weeks of data collection.

Two primary outcome measures were used: (1) direct, unobtrusive observations of hat use by children who appeared 12 years or younger as they exited the zoo and park sites and (2) sales of sunscreen and targeted hats at the zoo and park gift shops. For the observational measures, trained observers were stationed near the exit of the zoo and park on a portion of baseline and intervention phase days of both the winter and the summer study. Observers attempted to record data on all children appearing to be 12 years or younger as they came through the exit gate, noting the child's estimated age, gender, hat use (none, visor, cap/bonnet, flap hat, 2-in. brim, 3-in. brim, stroller/umbrella cover, or hood/backward cap), and sunburn level. When an infant's gender could not be determined, the "baby" category was used. Observations were conducted from 2:00 to 4:00 p.m. in the winter study and from 3:00 to 5:00 p.m. in the summer study. On approximately 51% and 60%, respectively, of the winter and summer observation days, a second observer also recorded data in order to obtain reliability estimates.

For the sales measure, the numbers of units of the targeted items sold each day of the winter and summer studies were obtained from the merchandising buyer. Data were also obtained from the marketing department on daily attendance rates; the researchers adjusted for this variable in the analyses. 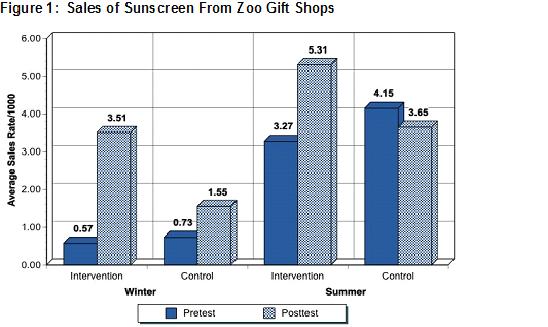 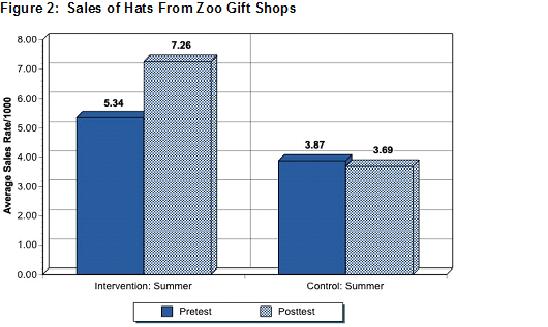 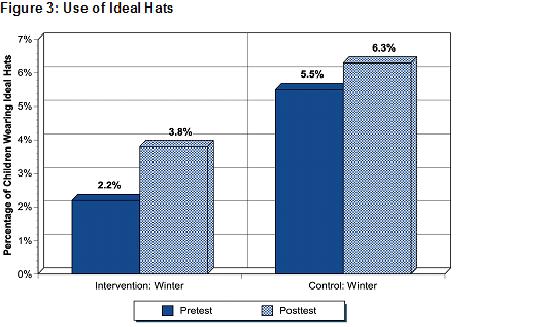 Together for Sun Safety

Block the Sun, Not the Fun