Mothers of children newly diagnosed with cancer are at increased risk for distress and symptoms of anxiety and depression associated with discovering their child has a potentially life-threatening illness. The stresses may stem from fear of their child's death, the daily demands of medical care, economic burdens associated with treatment, and family tensions. High levels of distress in mothers at the beginning of their child's cancer treatment may interfere with decisions about the administration of complex medical therapies. It is therefore crucial to help a mother reduce her emotional distress as soon as possible after her child is diagnosed with cancer.

Bright IDEAS: Problem-Solving Skills Training (PSST) is an eight session intervention that reduces emotional distress in mothers of children recently diagnosed with cancer. The letters in IDEAS represent the five essential steps of the PSST problem-solving approach.  The "I" stands for "identify the problem"; "D" stands for "determine the options"; "E" is for "evaluate options and choose the best"; "A" is for "act"; and "S" is for "see if it worked." PSST uses a generic, cognitive-behavioral coping skills training approach applicable to situations commonly encountered during pediatric cancer treatment. The intervention, which makes use of a manual, is delivered as weekly, 60 minute instructional sessions during regularly scheduled pediatric oncology clinic appointments or extended hospitalizations.

Optimum maternal engagement is gained by focusing on problems the mother identifies as especially relevant to her and her family. This approach also enables the mother and interventionist to review the appropriateness of selected solutions over time and changing circumstances.  The first session of PSST establishes a relationship between the mother and interventionist and introduces the problem-solving steps. The manual is presented and the mother is asked to identify relevant problems, choosing the most pressing one to work on first. The mother and interventionist work on the selected problem jointly, incorporating an analysis chart and a chart of possible solutions and potential barriers. As homework, the mother is asked to carry out the solution she ranked as most likely to succeed. Subsequent sessions continue to review homework assignments, work on the problem identified, and discuss the need for a supportive partner to assist in developing problem-solving skills after the intervention ends.

Training: Interventionists participate in a 1-2 day (8-16 hours) training workshop and are required to receive ongoing supervision of intervention delivery at a rate of 1 hour per 4 hours of client contact.

The intervention is suitable for implementation in medical-center-based oncology centers and outpatient oncology clinics during regularly scheduled pediatric appointments for medical treatment or during extended pediatric hospitalizations.

Interventionists are mental health professionals with master's degrees or doctoral candidates in psychology.

For information on cost and staff training, please contact the Principal Investigator (P.I.) for this program.  The P.I.'s contact information can be viewed on the Products page.

A multisite randomized clinical study investigated the effects of the Bright IDEAS intervention on problem-solving skills and symptoms of mood disturbance, posttraumatic stress, and depression in mothers of children recently diagnosed with cancer. A total of 430 English-speaking and Spanish-speaking mothers were randomly assigned to either the PSST intervention or the usual triaged psychosocial care routinely provided at pediatric cancer care centers following a comprehensive assessment by a mental health professional within a few days of the diagnosis. The participating mothers were 51% White, 26% Hispanic, 6% African American, 2% American Indian, 2% Asian, and 13% other-mixed ethnicity.

--Social Problem-Solving Inventory-Revised (SPSI-R), a 52-item instrument that measures  5 dimensions of problem-solving skill - a positive or negative problem-solving orientation and 3 strategic styles of problem solving (i.e., rational, impulsivity-carelessness, or avoidance) - on a 5-point scale that ranges from 1 (not at all true) to 5 (extremely true). The total score (0-20) is the weighted average of the 5 subscores, with higher scores indicating better problem-solving skills.

--Profile of Mood States (POMS), a 65-item inventory of positive and negative adjectives  rated on a 5-point scale that ranges from 1 (not at all) to 5 (extremely) to describe mood-related feelings during the prior week. The POMS inventory generates seven subscales: tension/anxiety, depression/dejection, anger/hostility, fatigue, confusion, vigor, and friendliness. These subscales combine to produce a total POMS score, with higher scores reflecting greater mood disturbance (i.e., negative affectivity).

--Impact of Events Scale, Revised (IES-R), a 22-item measurement tool for posttraumatic stress symptoms that generates subscales on intrusive thoughts, avoidance, and hyperarousal symptom frequency in response to a specific event during the prior week. The total score is the sum of the three subscales, with higher scores indicating more posttraumatic stress symptoms. 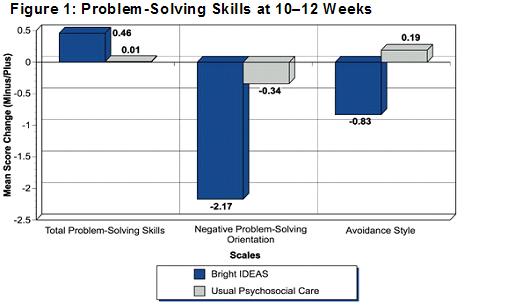 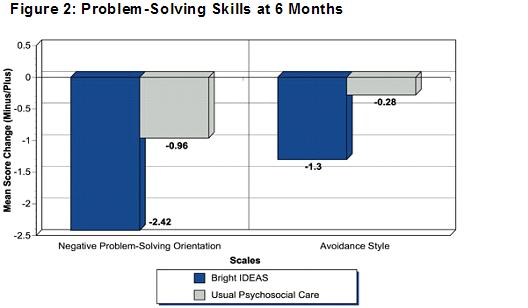 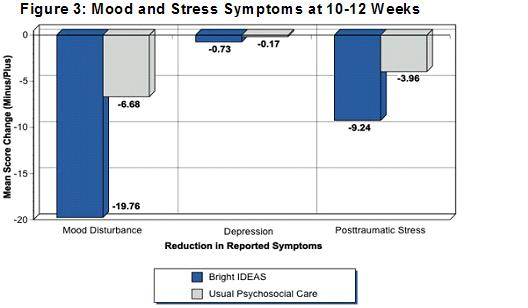 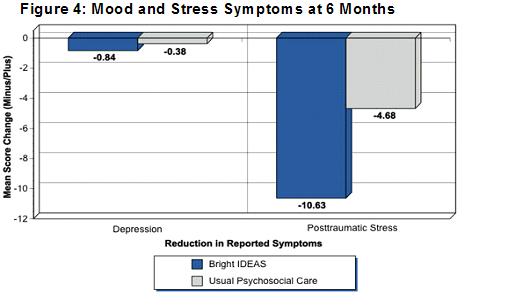 Designed to enhance the quality of life of individuals diagnosed with prostate cancer and their caregivers during all phases of the illness.

Designed to enhance the quality of life for caregivers of individuals with cancer.