Designed to enhance the quality of life for cancer patients and their caregivers through the use of touch, this self-directed multi-media instructional intervention teaches simple techniques to provide comfort and relaxation in cancer caregiving through a video, an illustrated manual, and e-books. The study showed decreases in patient symptom ratings (e.g., for pain and nausea) and increased caregiver self-efficacy.

Insights from the Cancer Control Field

See how implementers have used this program in the field

Gentle, noninvasive touch and massage are among the most popular forms of complementary therapy for relief of pain and other symptoms in cancer, based on the growing body of evidence of their safety and benefits. Numerous studies of massage with cancer patients have demonstrated significant effects on perceived stress, quality of life, and common symptoms such as pain, nausea, anxiety, mood disturbance, fatigue, and disturbed sleep. The impact of simple touch and massage on pain and mood can be immediate and clinically significant. Even a single massage session can reduce symptom levels significantly.

Touch-based methods of comfort are offered in many cancer treatment centers, hospice programs, and other palliative care settings. However, there are significant obstacles to wide use and consistent delivery to patients over time. The integration of touch as routine supportive care may be achievable through tapping an underutilized resource in the patient's natural social environment: family members and friends who have the need and desire to contribute to relief of suffering in their loved one. Caregivers often experience distress from perceived helplessness or low self-efficacy in contributing to the relief of suffering in their loved one, which can be alleviated with active, hands-on caregiving. However, caregivers tend to have inhibitions about touch in cancer, leading to unnecessary physical and emotional distancing at a time when patients need touch the most.

Touch and massage methods are relatively easily learned. Programs that provide brief caregiver education are needed to help build caregivers' sense of self-efficacy and empower them with the ability to have an impact on patient well-being. Such programs can potentially benefit the patient, the caregiver, and the quality of their relationship.

The Touch, Care, and Cancer Program is a multi-media instructional program for cancer patients and their caregivers that offers psychoeducational content on the use of touch and teaches simple techniques to provide comfort and relaxation in cancer caregiving.

The program is delivered via an instructional DVD that shows video footage from two 6-hour workshops. Effective 2014, the program will also be available as an online streaming video. Adult patient-caregiver dyads were filmed receiving the instruction, practicing the techniques, and discussing their observations as a group. Instructional content includes safety precautions related to touch with cancer patients; communication; intention and frame of mind; centering; positioning on home furniture; manual techniques for comfort and relaxation (head, neck, shoulders, back, feet, and hands); and acupressure for pain, anxiety, and nausea. The DVD also includes expert commentary by an oncologist and an oncology nurse researcher. A language menu offers user-selectable voice tracks in English, Spanish, Cantonese, and Mandarin, each with the option of captioning for the hearing impaired. Vietnamese is also available in the online streaming version.

An illustrated manual (available in English, Spanish, or Chinese) is included with the DVD, and e-books in these languages plus Vietnamese are available for the online version. The manual includes a "Precautions Checklist", which should be reviewed with the patient's physician prior to beginning the program to identify precautions relevant to the patient's specific medical condition (e.g., pressure restrictions, locations of lymphedema, etc.).

The intervention is completely self-directed. Patients and caregivers are encouraged to use the techniques at least three times per week in sessions 5 to 20 minutes in duration, or as frequently and for whatever duration they find helpful.

The program requires approximately three sessions per week, with a suggested duration of 5 to 20 minutes per session. Patients and caregivers are encouraged to continue using the techniques as long as they find them helpful.

The program is intended for cancer patients and their caregivers.

This program is implemented in the patient's home.

The instructional DVD and manual or the online streaming version with e-book, Touch, Caring and Cancer: Simple Instruction for Family and Friends, is required to implement the program. Those using this program may also wish to purchase the book, Partners in Healing: Simple Ways To Offer Support, Comfort and Care to a Loved One Facing Illness. The book is not required for implementation but offers additional information on strategies of self-care, ways of involving family and friends in a network of support, massage and touch techniques, and forms of "affirmative communication." Both the DVD and the book can be purchased from Amazon.com via links on the program website, and the online versions are also available there.

To measure the effects of the intervention on patient symptoms, both the treatment and control groups were instructed to designate one session per week of their assigned activity as a "weekly reporting session." This was to be a 20-minute session in which patients rated their symptom levels on a two-sided 5x8-inch card, before the session and again 15 minutes after the session ended. Patients rated how "bothersome" a symptom was on a scale from 1 ("not at all") to 10 ("extremely"). Symptoms assessed included pain, stress/anxiety, depression, fatigue, nausea, and a patient-defined "other" (miscellaneous) symptom. Mean pre- and post-session ratings were calculated for each symptom for each of the four weekly reporting sessions. Weighted group means across the four reporting sessions were calculated to determine mean difference scores and percent change for each symptom.

To measure the effects on caregiver self-efficacy, caregivers were asked to complete seven investigator-generated questions at baseline and 4-week follow-up, all rated from 1 ("lowest") to 10 ("highest").

Other outcomes assessed in the study included perceived stress among patients and caregivers, patient-reported quality of life, and caregivers' sense of self-worth (esteem). These outcomes did not show significant group differences. However, for stage IV patients there was a significant association between duration of massages received and improved stress scores at follow-up. Those reporting a mean > 13.75 minutes per massage were significantly more likely to have improved stress scores than those reporting a briefer mean duration of massages received. 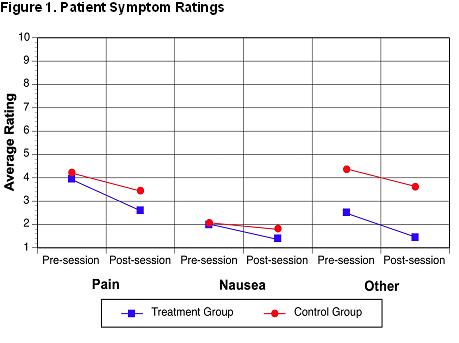 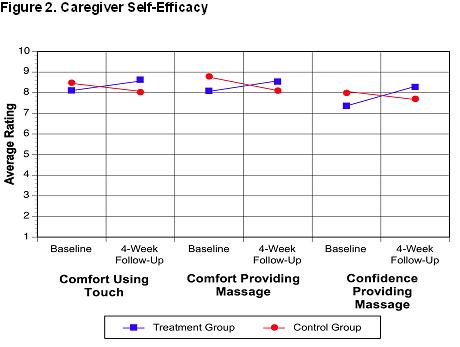 Designed to enhance the quality of life for individuals with cancer.

Designed to enhance the quality of life for caregivers of individuals with cancer.

Designed to enhance the quality of life of individuals diagnosed with prostate cancer and their caregivers during all phases of the illness.

Designed to help reduce the emotional distress in mothers of children recently diagnosed with cancer.