In the United States, breast cancer is the most common cancer among women, with approximately 237,000 women being diagnosed with breast cancer annually. There are several risk factors for breast cancer, including being overweight or obese (in postmentopausal women) and having already had breast cancer. Additionally, being obese may negatively affect cancer survivorship, including quality of life, cancer recurrence, cancer progression, and survival. The U.S. Preventive Services Task Force recommends intensive multicomponent behavioral interventions for adults with a body mass index (BMI) of 30 kg/m2 or higher (indicating obesity) to help them reach a healthy BMI. Interventions that target weight loss among breast cancer survivors are needed to help improve prognosis and overall quality of life.

Exercise and Nutrition to Enhance Recovery and Good Health for You (ENERGY) is a 2-year nutrition- and physical activity-based weight loss intervention that targets female breast cancer survivors who are overweight or obese. ENERGY's conceptual framework posits that determinants of health are influenced by personal, social, and physical environmental antecedents and consequences of behavior affect one's motivation and self-efficacy for behavior change. Goal setting, self-monitoring, and learning to overcome barriers are central to this model. The overall goal of ENERGY is to help participants achieve a healthier weight (a sustained weight loss of 7% body weight over the intervention period) and lifestyle habits.

The ENERGY intervention consists of 1-hour group sessions, counseling by telephone or email, and tailored print newsletters. Group sessions teach skills intended to increase physical activity, improve eating attitudes and behaviors, and enhance personal body image (i.e., thoughts and feelings about body shape and weight). Session topics include social support, dealing with diet-related lapses, managing stress, maintaining heart health, understanding calories, and strength training. Each group of about 15 women meets each week for the first 4 months, every other week in months 5 and 6, and monthly for the remainder of the first year, for a total of 26 sessions. One or two group leaders, who have a professional background in dietetics, psychology, and/or exercise physiology, remain with their assigned group for all sessions. To encourage attendance, sessions are scheduled at times that are convenient for participants. The core content of the sessions is standardized, but group leaders can adapt material and discussions to meet the needs of a given group.

Counseling calls and emails provide feedback on individual progress and offer participants support. These contacts are brief (e.g., 10-15 minutes for calls) and give participants a chance to set and plan follow-through for specific goals. Participants receive 14-16 counseling calls or emails in the first year and a total of 24-38 calls or messages during the 2-year program.

-- Approximately 30 minutes to prepare and send each tailored newsletter

ENERGY can be implemented in community settings.

Costs associated with program implementation are not available.

A randomized controlled trial compared ENERGY with a less intensive weight loss intervention that included weight management resources and materials published by the National Institutes of Health, the American Heart Association, the U.S. Department of Health and Human Services, and the U.S. Department of Agriculture (e.g., ChooseMyPlate.gov). Comparison group participants received individualized counseling sessions at baseline and 6 months that included a recommendation to adopt a calorie intake appropriate for weight loss and participate in regular exercise (60 minutes/day). They also received monthly telephone calls/emails from the study coordinator over the course of the 2-year intervention and were invited to attend healthy living seminars every other month for the study's first year.

Participants were recruited from four sites in San Diego, California; Denver, Colorado; St Louis, Missouri; and Birmingham, Alabama. The study recruited women who were at least 21 years of age and had a history of breast cancer (Stage I at least 1 cm, Stage II, or Stage III) diagnosed within the previous 5 years. Other inclusion criteria included having completed initial therapies (not including endocrine therapy), having a BMI of 25 to 45 kg/m2 (in the range of overweight and obese), and being able to comply with study procedures. Exclusion criteria included having a history of malignancies other than initial breast cancer, except nonmelanoma skin cancer; serious psychiatric illness; and any medical condition substantially limiting moderate physical activity. Potential participants were recruited by sending letters to women in local or regional cancer registries (n=11,311), distributing flyers (2,740), and securing media coverage through television and radio. Of the potential participants, 4,291 were not eligible and an additional 17 were determined ineligible after baseline assessments. Randomization was performed by a centralized computer process that assigned participants in a 1:1 ratio to either the ENERGY (n=344) or comparison (n=348) group.

The main outcome was weight, with secondary outcomes being BMI, waist circumference, and physical activity. All were assessed at baseline and 6, 12, 18, and 24 months after baseline except waist circumference, which was measured at baseline and 12 and 24 months after baseline. Weight was measured at clinic visits using a calibrated scale. BMI was calculated using height and weight. All anthropometric measures were standardized and outlined in an operational manual. Physical activity was measured with the Godin Leisure Time Exercise Questionnaire, which uses three questions to determine the frequency and duration of mild, moderate, and strenuous exercise performed during free time in a typical week. 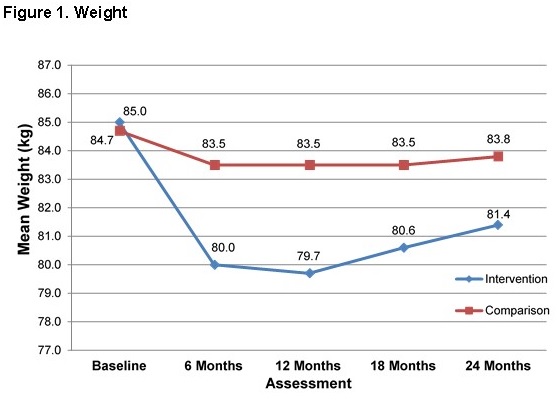 
(Be the first to write a review for this program)
Browse more Obesity programs
Browse more Survivorship / Supportive Care programs
NCI does not endorse nor recommend any commercial products, processes, or services, nor do they guarantee the success of programs made available on the site. The views and opinions of authors expressed on this website do not necessarily state or reflect those of the NCI, and may not be used for advertising or product endorsement purposes. Rather, the information is provided to help you make an informed decision about the best program options to meet your cancer control needs. Please see the disclaimer for further information.