Designed to enhance the quality of life (QOL) for individuals with cancer, this intervention has three key components: a baseline assessment with the patient to create a personalized palliative care plan, a case presentation to an interdisciplinary team to make recommendations for supportive care referrals and community resources, and four nurse-led one-on-one educational sessions addressing self-care and QOL. The study showed increases in QOL and spiritual well-being and decreases in lung cancer symptoms and psychological distress.

In the United States, lung cancer is the primary cause of cancer-related death and is the second most common type of cancer. Approximately 150,000 people die each year from lung cancer, and non-small cell lung cancer (NSCLC) accounts for 85% of lung cancer cases. Lung cancer can cause pain and an array of physical symptoms including coughing blood, body aches, infections, weight loss, and weakness. Other common physical symptoms of cancer and cancer treatment include fatigue, loss of appetite, nausea, vomiting, and insomnia. Further, patients who receive a diagnosis of cancer and undergo treatment often face depression, anxiety, and fear as well as concerns about their legacy and loved ones. Practical concerns, such as those related to finances, insurance, and employment, also may emerge. In the face of a diagnosis and potential end of life, patients also may struggle spiritually as they search for meaning in their lives and an understanding of why cancer is happening to them.

Palliative care can help improve the quality life (QOL) of patients with lung cancer, regardless of disease stage. (Based on the size, location, and progression of the tumor, patients are assigned a stage of cancer: occult [hidden stage], Stage 0, Stage I, Stage II, Stage IIIA, Stage IIIB, and Stage IV.) Palliative care aims to assist lung cancer patients by managing pain and other symptoms; providing emotional support; coordinating services to assist with financial, legal, and other needs; and exploring faith in the search for peace or acceptance.

The intervention has three key components. First, a nurse meets with the patients to complete a comprehensive baseline assessment that includes QOL, symptoms, and psychological distress. This assessment is used to create a personalized palliative care plan that includes four domains of QOL: physical, psychological, social, and spiritual. Second, the patients' cases are presented at a weekly meeting of the interdisciplinary team (IDT), which includes nurses, palliative medicine physicians, thoracic surgeons, medical oncologists, a geriatric oncologist, a pulmonologist, a social worker, a chaplain, a dietitian, and a physical therapist. Using the comprehensive QOL assessment as a guide, the IDT makes recommendations for consultations or referrals for palliative care and supportive care services. All recommendations are approved and managed by the treating oncologist. Last, patients receive four nurse-led, one-on-one educational sessions addressing the QOL domains. The sessions are tailored to individual patients in that patients select the session topics to discuss from a list of options. Patients receive an educational manual containing information on all the QOL domains. During these sessions, the nurse also discusses the palliative and supportive care resources the IDT recommended.

The nurses who complete the baseline assessments and deliver the educational sessions have at least 20 years of experience in oncology. Palliative Care Intervention for Lung Cancer Patients is designed to be implemented in conjunction with Palliative Care Intervention for Caregivers of Lung Cancer Patients. This caregiver intervention aims to improve quality of life, psychological distress, and caregiver burden for family caregivers of lung cancer patients.

The intervention is intended for patients with Stage I-IV NSCLC.

The intervention is suitable for implementation in clinics in rural, suburban, or urban/inner city settings.

A quasi-experimental trial was conducted to assess the intervention in comparison with usual care with patients who had Stage I-IV NSCLC and were receiving cancer-related treatments at the City of Hope, a comprehensive cancer center in Duarte, California. Patients in the outpatient thoracic surgery and medical oncology clinics who read and understood English were sequentially enrolled into the study, such that patients were assigned to the usual care group from November 2009 to December 2010 and to the intervention group from July 2011 to August 2014. Enrolled patients were classified as early stage (Stage I-IIIB) and late stage (Stage IV) of NSCLC.

Of the 491 total patients who completed the baseline assessment (219 in the usual care group and 272 in the intervention group), 78% were White (including Latino), 13% were Asian, 6% were Black/African American, 2% were Native Hawaiian/other Pacific Islander, 1% were of more than one race, and less than 1% were American Indian/Alaska Native. About half (46%) were younger than 65 years old, 34% were 65-74 years, and the remainder were 75 years and older. Sixty-five percent were married or had partners, and 35% were single, separated, widowed, or divorced. Almost half of participants (47%) made more than $50,000 per year, 36% of participants made less, and the remaining preferred not to answer.

Significant baseline differences existed between the study groups on the variables of age, employment, religion, and receipt of surgery as a cancer treatment. Further, age, race, living situation, religion, income, and smoking history differed significantly between the early- and late-stage patients.

-- Disease-specific symptoms were measured using the Lung Cancer Subscale (LCS) of the FACT-L. The total score ranges from 0 to 32, with higher scores representing fewer symptoms.

Data were collected using these instruments at baseline and 6, 12, 24, 36, and 52 weeks follow-up, with late-stage patients participating in follow-up assessments only up to 24 weeks. The data used in the primary analyses were collected at the 12-week follow-up. 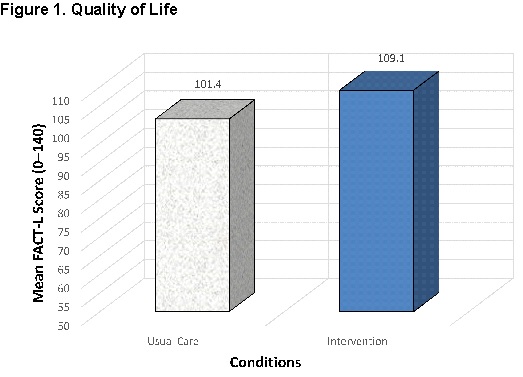 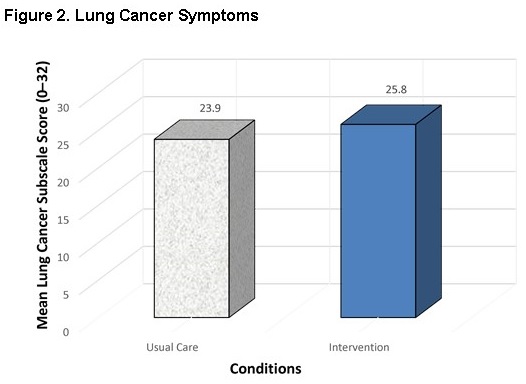 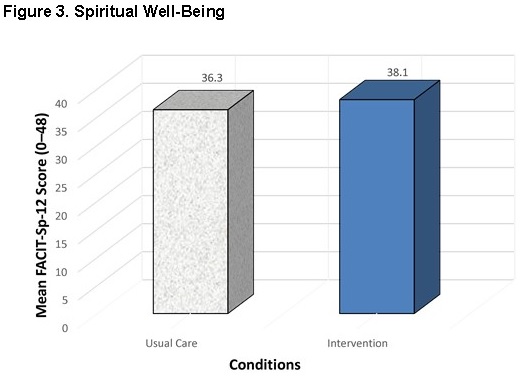 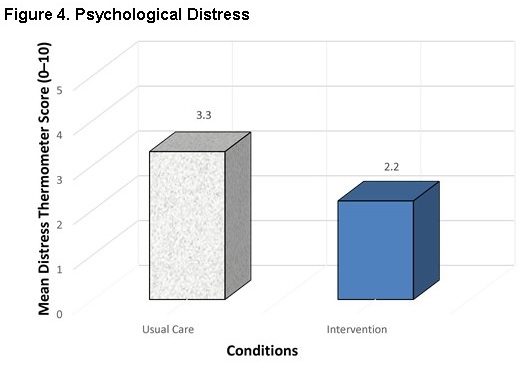