Designed to enhance the quality of life for terminally ill patients with advanced cancer, this manualized group intervention consists of eight weekly clinician-led sessions with exercises that engage group discussion, as well as homework assignments, that help patients enhance the meaning in their lives. The study showed increases in spiritual well-being and quality of life and decreases in depression, desire for hastened death, hopelessness, and physical symptoms of distress.

For inquiries related to staff training or program implementation, please contact William Breitbart at breitbaw@mskcc.org or at (646) 888-0052.

It is estimated that cancer claims the lives of nearly 600,000 men and women each year in the United States. In the time prior to death, patients experience end-of-life challenges such as physical and psychological distress, spiritual issues, concerns about carrying out everyday tasks, and grief over leaving family and other loved ones behind. Patients may think of themselves as spiritual and/or religious and may depend on spiritual and/or religious beliefs to help them cope with their distress. Spiritual and religious beliefs and practices vary based on the patient and his or her individual needs. Interventions are needed to help patients with advanced cancer find meaning in their lives, improve their spiritual well-being, and reduce emotional and physical distress.

Meaning-Centered Group Psychotherapy (MCGP) aims to help terminally ill patients with advanced cancer enhance meaning in their lives. MCGP was developed to assist terminally ill cancer patients who are experiencing hopelessness, despair, and a desire for hastened death due to their prognosis. MCGP is influenced by the work of psychiatrist Viktor Frankl and logotherapy, which posits that human beings are motivated by searching for meaning in their lives. The intervention integrates Frankl's concepts of meaning with fundamental existential concepts and a focus on connecting and finding meaning in human existence. The concepts of meaning developed by Frankl and adapted for MCGP include meaning of life (i.e., life always has meaning, even when we are disconnected from it), will to meaning (i.e., we innately seek and create meaning in our lives), freedom of will (i.e., we have the freedom and responsibility to discover meaning, direction, and identity), and sources of meaning (i.e., we derive meaning from four main sources―creativity, experience, attitude, and legacy).

Clinicians must be master's-level psychologists or social workers with a background in psycho-oncology and participate in the training workshops from the MCGP team at the Memorial Sloan-Kettering Cancer Center. Each trainee conducts a session while a trainer completes a treatment adherence form to measure the clinician's ability to facilitate the intervention with fidelity.

-- 90 minutes for each of eight weekly sessions

-- 3-4 hours for clinician training, which includes reviewing the treatment manual, listening to cases, and role-playing cases

The intervention is implemented in clinical settings.

MCGP was evaluated in a randomized controlled trial at the Memorial Sloan-Kettering Cancer Center between August 2007 and May 2012 with patients who had advanced cancer. Study participants were recruited through flyers posted in waiting areas throughout the Cancer Center, a review of medical records, and referrals from doctors. Patient eligibility requirements included being diagnosed with stage IV cancer (or stage III cancer if diagnosed with a poor-prognosis disease), able to speak English, aged age 18 and over, and ambulatory. Exclusion criteria were significant cognitive impairment or psychotic symptoms based on clinician assessment or physical limitations that would limit participation in an outpatient group-based intervention.

Patients were randomized to MCGP or to Supportive Group Psychotherapy (SGP). Like MCGP, SGP is a manualized intervention delivered in eight weekly sessions to patients with advanced cancer. It helps patients cope by encouraging them to share concerns related to their diagnosis and treatment, describe experiences and emotions related to cancer, identify challenges they face, and offer support and advice to one another. Clustered randomization was used to assign 253 patients to either MCGP (n=132) or SGP (n=121). Groups of 8-10 participants were formed and then randomly assigned to either MCGP or SGP, with each set of 8 groups containing 4 MCGP and 4 SGP groups.

The primary outcomes were spiritual well-being and quality of life, and the secondary outcomes were depression, desire for hastened death, hopelessness, physical symptoms of distress, and anxiety. Participants completed self-report questionnaires to measure primary and secondary outcomes before participating in the group intervention, after the last group session, and 2 months after completion of treatment. Outcomes were measured using the following instruments:

Treatment effects were evaluated across all three time points for participants who attended at least three group sessions (either MCGP or SGP). 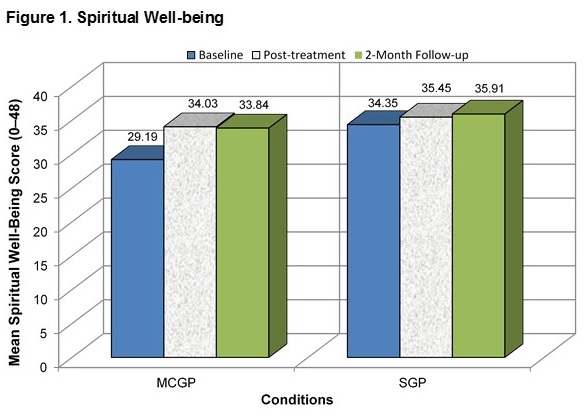 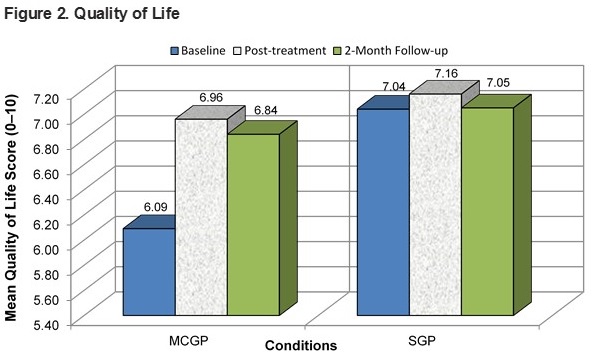 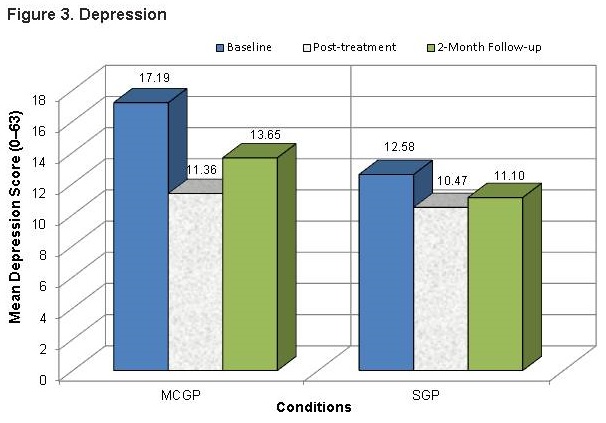 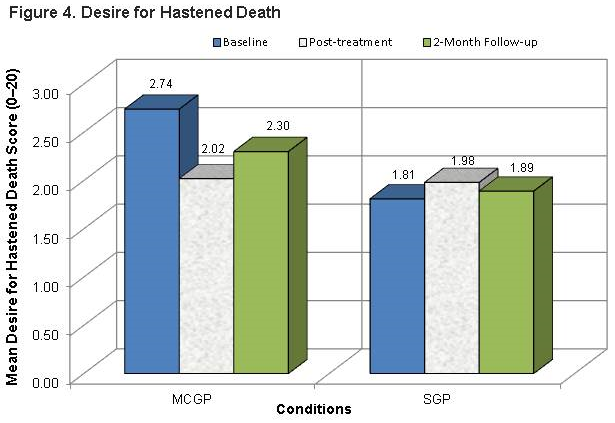 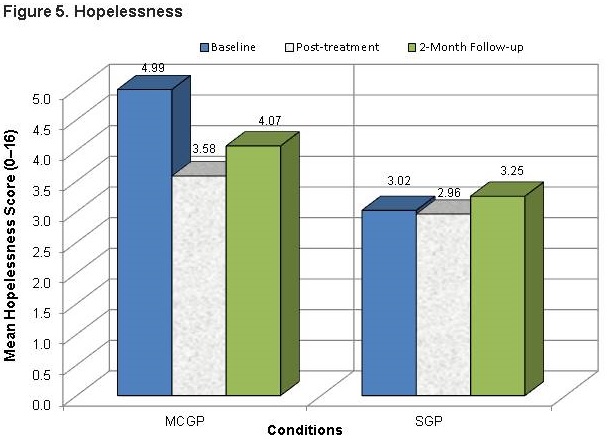 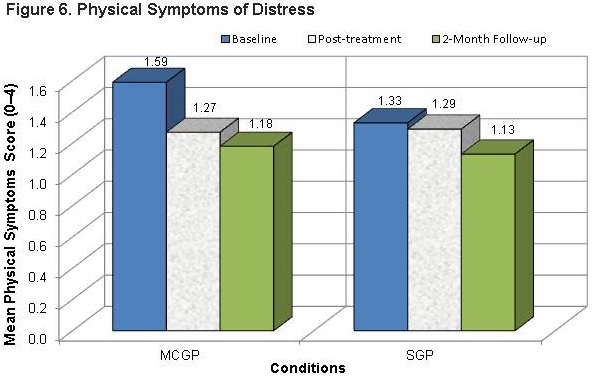 Designed to enhance the quality of life for individuals with cancer.