Colorectal cancer is the third most common type of cancer and the second leading cause of cancer death in the United States.  The incidence and mortality rates associated with this type of cancer are disproportionately high in certain minority populations.  To reduce colorectal cancer mortality rates in adults aged 50-75 at average risk for the disease, the United States Preventive Services Task Force recommends three screening technologies: annual high-sensitivity fecal occult blood testing (FOBT), sigmoidoscopy every 5 years with FOBT between exams, and optical colonoscopy every 10 years.

The Filipino-American Health Study is a multicomponent, colorectal cancer (CRC) screening intervention consisting of a small-group educational session delivered by trained Filipino-American health educators (nurses).  The intervention makes use of take-home print materials, a free fecal occult blood test (FOBT) kit, a follow-up reminder letter to the participant, and a letter to each participant's medical provider.  The educational session follows a written curriculum designed to deliver specific information and recommendations for CRC screening to small groups of 6-10 Filipino-American participants at community-based organizations and churches. During the educational session, the health educator facilitates discussion of (1) the incidence and mortality of CRC among Filipino-American men and women, (2) risk factors and symptoms, (3) benefits of prevention and early detection, (4) recommended screening tests (FOBT, sigmoidoscopy, and colonoscopy), (5) where to obtain screening tests, and (6) myths versus facts about CRC and screening.

At the end of the educational session, the health educator makes a strong recommendation to obtain an FOBT annually and encourages participants to discuss the need for CRC screening with their physicians.  Participants sign a personalized pledge to obtain a stool blood test and FOBT kits are passed out.  Participants receive take-home print materials summarizing the CRC screening information and a copy of the American Cancer Society brochure Colon Testing Can Save Your Life in English and Tagalog.

Three months after the educational session, all participants receive a personalized letter reminding them to obtain an FOBT yearly, and their physicians are notified by mail about their participation in the Filipino-American Health Study and that they might be submitting a completed FOBT kit or requesting CRC screening.

Although nurse health educators completed a 4-6-hour training session specifically for the research study, little training beyond the intervention manual is required for program implementation according to the principal investigator who is available by phone to potential implementers.

The intervention targets Filipino-Americans aged 50-70 years who are not screened for CRC according to the guidelines.

The intervention is suitable for implementation in community-based organizations and churches serving the Filipino-American population.

The following materials are required:

Baseline interviews to confirm nonadherence to CRC screening guidelines were conducted primarily by telephone (70%) and in English (60%).  Of the 906 Filipino-Americans who completed baseline interviews, 548 were nonadherent to CRC screening guidelines (due for screening) and randomized to one of three conditions: the intervention with a free FOBT kit, the same intervention without the FOBT kit, and a control condition consisting of a physical activity education session only.

The average age of study participants was 59; two thirds were female, married, had a college education, and had an average annual income of less than $50,000.  All study participants were foreign-born and had lived in the United States for an average of 18 years. Sixty-percent of the participants considered themselves more Filipino than American, with 36% considering themselves to be equally Filipino and American; 19% spoke primarily Tagalog with friends.  Although most had health insurance (70%) and a regular doctor (79%), only 25% had ever received any prior CRC screening.  Other than the study participants in the control condition being more likely to complete the baseline interview in English (69%) as compared with participants in either of the two intervention conditions, there were no significant differences among conditions at baseline.

All randomized participants were assessed for receipt of any CRC screening (defined as FOBT, sigmoidoscopy, or colonoscopy) at 6 months after the small-group educational session (whether intervention or control conditions) by follow-up telephone interview (98%) in English (86%) primarily.  Up to nine telephone callbacks (on different days and times) were attempted to reach each participant for follow-up.  Ninety-three-percent of the participants attended the educational session across the three conditions.  Follow-up interviews were completed with 79% of study participants within an average of 6 to 8.2 months following the educational session.  A comparison of study completers (432 participants) and noncompleters (116 participants) indicated that completers were more likely to have completed the baseline interview in English, be college educated, have an annual income of $50,000 or more, and report a doctor's recommendation to obtain FOBT or an endoscopy at baseline. 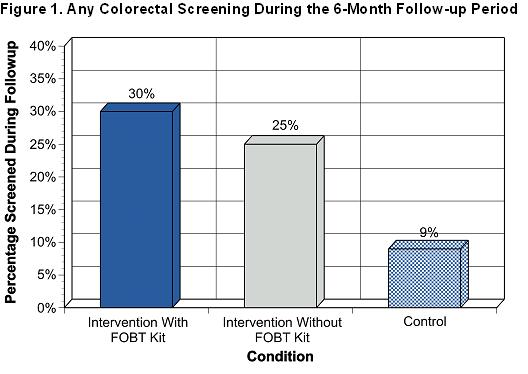 
(Be the first to write a review for this program)
Browse more Colorectal Cancer Screening programs
NCI does not endorse nor recommend any commercial products, processes, or services, nor do they guarantee the success of programs made available on the site. The views and opinions of authors expressed on this website do not necessarily state or reflect those of the NCI, and may not be used for advertising or product endorsement purposes. Rather, the information is provided to help you make an informed decision about the best program options to meet your cancer control needs. Please see the disclaimer for further information.