Designed to increase colorectal cancer screening among adults that have not responded to a screening invitation, this intervention involves mailing a series of follow-up reminder letters that outline the process for self-referral along with bowel cancer and screening educational materials (a 2-page leaflet or 12-page booklet). The study showed increases in completing flexible sigmoidoscopy screening and in making an appointment for flexible sigmoidoscopy screening.

Self-Referral Reminders for Flexible Sigmoidoscopy Non-Participants provides screening reminders to adults who are eligible for colorectal cancer screening but have not already responded to a screening invitation. The program targets adults aged 56 to 59 in England who have received an invitation for a free flexible sigmoidoscopy at 55 offered by the National Health Service (NHS), but have not undergone screening. Based on the Behavior Change Wheel and Behavior Change Technique Taxonomy, which can be used to identify targets for change and the behavioral techniques likely to affect them, the program aims to increase flexible sigmoidoscopy uptake among previously non-participating adults through reminder letters and educational material.

-- The two-page theory-based leaflet provides photographs and testimonials of individuals who previously had a bowel screening, an endorsement from a primary care physician, statistics on bowel cancer, benefits of screening, and contact information to schedule an appointment. Published by Partners in Creation, the leaflet is tailored for the local community.

-- Time to modify the educational material and letters for the implementer’s local area
-- Approximately 1 hour to prepare the mailings each week (printing the letters and inserting a letter, educational material, and return envelope in each mailing)

The intervention was designed for adults aged 56 to 59, but it can be adapted for use with any adults who are eligible for flexible sigmoidoscopy screening in their local area and have not been screened.

This intervention is intended to be implemented in clinic and home settings.

A randomized controlled trial in England compared two interventions (reminder letters plus standard information booklet and reminder letters plus theory-based leaflet) against a control condition with no reminders or educational material. Residents of two diverse neighborhoods in London were randomized to one of the three groups. Per NHS procedures (prior to the study), participants received an invitation letter around their 55th birthday to undergo a free flexible sigmoidoscopy screening. A year after they were invited to receive free screening, they were eligible to participate in the study if they had not undergone screening, were still registered with a general practice inside the included neighborhoods, and were alive. Intervention participants received the reminder letters and either the standard information booklet or theory-based leaflet, depending on their group assignment. Control group participants only received the initial invitation sent by the National Health Service around their 55th birthday; they did not receive follow-up reminder letters or educational material as part of the study.

The study enrolled 1,383 participants, all adults who had not undergone free NHS screening within 1 year of receiving an invitation. Each of the three groups had 461 participants. After the delivery of the 12-month follow-up reminder to the intervention participants, 119 participants (8.6%) had been screened, 8 (0.6%) had died, and 38 (2.8%) were no longer registered with the participating local medical practices. The remaining 1,218 (88%) were included in the second round of reminders and the 24-month follow-up analysis. All these participants were 57 years old, and more than half (53.4%) were female.

The main outcome measures examined whether participants completed flexible sigmoidoscopy screening and made an appointment for flexible sigmoidoscopy screening. Outcome data were collected at 12- and 24-month follow-up through the Bowel Cancer Screening System (electronic medical records). The data collected originated from general practices and were obtained following legal protocol. The analysis for the outcome of completed flexible sigmoidoscopy screening was conducted specifically for the purposes of this summary. The outcome reported in the article, attended an appointment, included individuals who were not screened, although there were minimal differences between the percentage who made an appointment and the percentage who participated in screening. The outcomes from the 12- and 24-month follow-up are combined in the analysis. 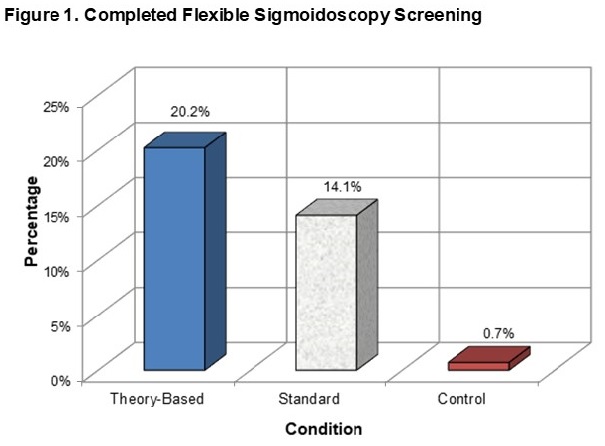 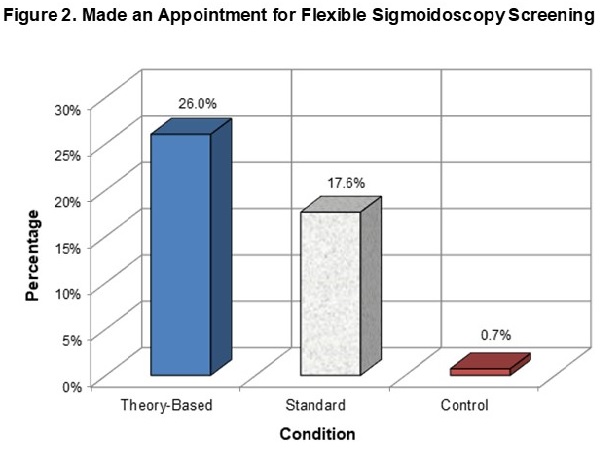