This program has been evaluated on criteria from the RE-AIM framework, which helps translate research into action. Learn more about the ratings

Prostate cancer is the second leading cause of cancer death and the most frequently diagnosed non-skin cancer in American men. However, the overall health benefits of prostate cancer screening with the prostate specific antigen (PSA) test remain controversial. Given the controversy, the American Academy of Family Physicians recommends that patients and physicians engage in a process of shared decision-making (SDM) to decide whether to get a PSA test. To engage in SDM, the patient must understand the risks and benefits of the test. However, the amount of time available for physician-patient discussion during appointments is limited, and there is empirical evidence that a physician's unstructured verbal remarks regarding the risks and benefits of the PSA test may be misunderstood by patients. Alternative methods to inform patients about the risks and benefits of prostate cancer screening are needed.

The Web-based Decision Aid for Prostate Screening is a Web resource designed to provide patients with information about the risks and benefits of the PSA test. The decision aid was designed by physicians and reviewed by a general decision aid expert and several content experts with experience developing prostate cancer screening decision aids. Eligible patients are identified when they schedule their wellness appointment. Viewed prior to a physician appointment, the Web-based decision aid can help patients effectively participate in SDM with their physician in deciding whether to get a PSA test. The brochure and Web-based version provide identical content including information about prostate cancer, screening concepts, potential benefits, known risks, and current uncertainties about the PSA test. The decision aid may be sent to patients as a Web link in an e-mail or mailed as a brochure.

To implement this intervention, the health care organization must acquire the materials, identify targeted patients, and mail or e-mail the materials to the patients to be viewed prior to their scheduled appointment. Time required will vary according to the efficiency of the procedure to identify targeted patients, prepare e-mails or brochures for mailing, and the number of patients targeted.

The intervention is targeted to men aged 50 to 70 years, without a history of prostate cancer.

The intervention is suitable for clinical settings such as health care organizations or practices, who serve men aged 50 to 70 years.

The required resource is the link to the Web-based information or a paper printout from the Web site: "Should you get a PSA test? A Patient-Doctor Decision" (http://www.acorn.fap.vcu.edu/psa/).

Men aged 50 to 70 with a scheduled health maintenance examination at a large family practice were telephoned about 2 weeks prior to their appointment and invited to participate.  Of the 497 participants who agreed to participate, 90% were Caucasian and 84% were college educated.  The majority of the participants were also in the high socio-economic group. The participants were randomly assigned to receive the decision aid in either a Web-based or brochure format, or to a control condition in which participants received no information about the PSA test prior to their appointment.

Outcomes included patients' perception of their control over the decision regarding prostate cancer screening (i.e., locus of decisional control) and patients' knowledge of the risks and benefits of prostate screen procedures.  All outcomes were measured by self-report in questionnaires filled out immediately after the examination appointment.

Exposure to either decision aid (i.e., Web page or brochure) prior to the examination visit increased patients' perceptions that they had the primary role in making the decision regarding the PSA test, when compared to patients in the control group. For example, 56% of patients who reviewed the informational Web page and 54% of patients who reviewed the informational brochure reported that they (rather than their physician) made the decision regarding screening (with or without carefully considering the advice of their physician), compared to only 46% of patients who did not receive information prior to their visit (p<.05 for each experimental condition, compared to the control group). 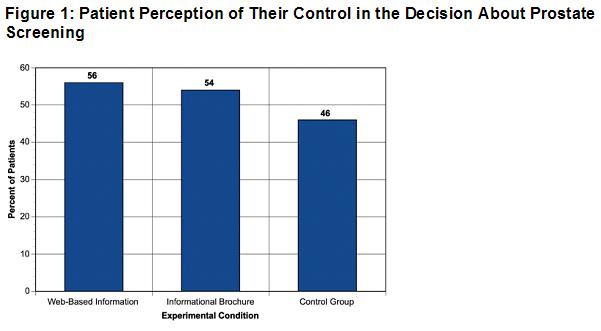 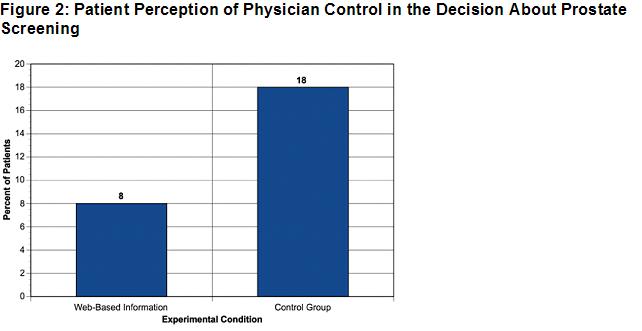 Exposure to either decision aid also increased patient knowledge regarding the risks and benefits of prostate cancer screening. The percentage of correct answers on the knowledge scale was 54% in the control group, compared to 69% in the Web-based group (p<.001) and 69% in the informational brochure group (p<.001). 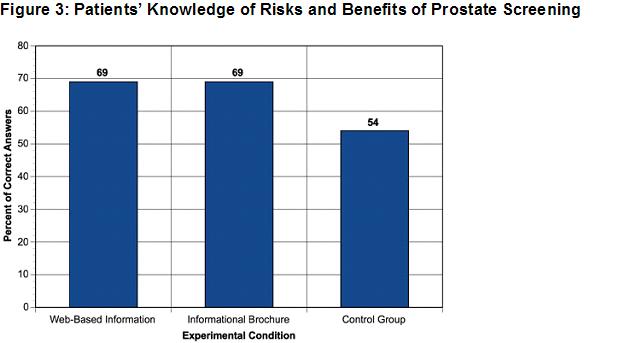 Although decisional conflict was not influenced by the intervention, the researchers observed that a larger percentage of patients (19%) reported that they had more control over the decision to get a PSA test than they desired, and a comparatively smaller percentage of patients reported their physician had more control than they desired (11%: p=.003), indicating that there are limits to the amount of control patients desire.