Designed to improve dietary habits to reduce obesity among children aged 2-6, this primary care-based obesity management intervention for parents and their overweight children includes seven motivational interviewing counseling sessions and three telephone follow-up calls provided by a pediatric nurse practitioner, numerous resources for parents and their children, and practice-level restructuring such as enhancements to the electronic medical record system to assist with decision support and patient tracking. The study showed a lower increase in body mass index (BMI) and a decrease in daily television and video viewing time.

Childhood obesity more than doubled in children and tripled in adolescents in the past 30 years. In a 2011 report, the Institute of Medicine highlighted the opportunity afforded to pediatricians and other health care professionals to make parents aware of their child's excess body weight early on, at routine pediatric visits. The Institute of Medicine recommends that health care professionals measure weight and height/length in a standardized way and encourages parents to (1) keep children active throughout the day; (2) provide them with diets rich in fruits, vegetables, and whole grains; (3) limit screen time; and (4) ensure that children sleep an adequate amount daily.

In practices implementing High Five For Kids, pediatric nurse practitioners (NPs) provide parents and their overweight children with seven MI counseling sessions (four 25-minute, in-person sessions and three 15-minute telephone sessions), which include educational modules on six behaviors associated with obesity. The NPs encourage parents to set and achieve the following obesity management goals for their children: (1) no more than 4 ounces of sugar-sweetened drinks daily; (2) at least five servings of fruits and vegetables daily; (3) fast food no more than once per week; (4) at least 1 hour of active play daily; (5) no more than 1 hour of television and video viewing daily; and (6) no television in the room where the child sleeps. In addition, primary care physicians use brief, MI-based, focused negotiation skills at all routine well-child visits to endorse family behavior change.

High Five For Kids resources for the practice include enhancement of the existing electronic medical record system with tools to assist clinicians with decision support, patient tracking, follow-up, scheduling, and billing. An online toolkit includes the High Five For Kids poster for the patient waiting room, outlining the six target behaviors to encourage ongoing dialogues during well-child visits. For the in-person MI sessions with nurse practitioners, there are educational modules for each of the target behaviors with printed scripts that are matched to the family's stage of readiness to change. Participating families are encouraged to choose one or more of the six target behaviors to focus on changing, depending on what is most relevant to them. Also included are printed handouts for each in-person session as well as electronic tools for self-management between in-person visits and telephone follow-up with the nurse practitioner; lists of local community resources for regular physical activity; and an interactive High Five For Kids website with educational materials, recipes, and other features that can be accessed from home. Small incentives to achieve target behavior goals, such as water bottles, books, and snack containers, are also provided to families, and an electronic television monitoring device is offered to assist with the goal of reducing daily viewing time.

- 2 days of training for the nurse practitioners and physicians to: (1) develop skills in motivational interviewing and conducting brief negotiation interviews during routine well-child care visits; (2) learn how to structure intervention sessions; and (3) learn about patient materials available for home use between clinic visits and telephone follow-up

- 5-10 minutes for a brief, focused negotiation interview by the primary care physician at the annual well-child care visit

The intervention is designed for pediatric primary care practices and clinics.

A 2-year, cluster randomized controlled trial evaluated the effects of High Five For Kids on change in BMI and parent report of child's daily television and video viewing time in 10 primary care pediatric offices of a multi-site group practice in Massachusetts. The study focused on effects after the intensive, first-year intervention phase of the program; the second-year maintenance phase is not yet evaluated. Study practices were prepared for stratified randomization by taking the four largest and six smallest offices in the group practice to form five pairs matched on racial/ethnic composition. A computerized routine randomly assigned one office practice in each pair to the intervention and one to the usual care control condition. The five office practices assigned to usual care provided whatever standard of care was offered by their pediatric practice. This typically included well-child care visits and follow-up appointments for weight checks with the child's assigned pediatrician or a subspecialist (for example, a nutritionist). Office visits for families in the usual care condition included baseline and annual well-child care visits.

Study participants were children, aged 2.0-6.9 years, who received their pediatric care through the group practice between August 2006 and October 2008. Participants met one of two eligibility criteria for weight: (1) BMI in the obese range (95th percentile or higher) or (2) BMI in the overweight range (85th to 94th percentile) with at least one overweight parent (BMI of 25 kg/m2 or higher). The researchers used electronic medical records from the 10 participating practice offices to identify 3,253 children who had a BMI in the 85th percentile or higher sometime within the year prior to their index well-child care visit. Following pediatric provider medical clearance and approximately 1 month prior to the child's scheduled well-child care visit, they sent parents a letter describing the study and including an opt-out telephone number. Parents who did not opt out of the study within 7 days were telephoned by a research assistant, who assessed them for eligibility by a screening interview; the team then mailed a written informed consent form to complete. Children and parents were enrolled after child BMIs were confirmed at the scheduled well-child visit and written informed consent was obtained by research staff. At 1-year follow-up, parents completed a telephone interview by research staff, and their children had height and weight measured as part of the annual well-child care visit.

The average age of the final sample of 445 children was 4.9 years, with a standard deviation of 1.2 years; 52% of the children were male, 57% were White, 19% were Black, and 17% were Latino. Fifty-three percent of intervention children had a BMI in the 95th percentile or higher, compared with 60% of children in the usual care control sites. Children randomized to the intervention sites were more likely to be racial/ethnic minorities, have an obese parent, and live in lower-income households. There were no baseline differences in any of the targeted outcome behaviors: presence of a television in the child's bedroom; daily consumption of sugar-sweetened beverages; daily consumption of fruits and vegetables; daily television and video viewing; daily active play; and weekly fast food consumption.

To measure the intervention's effect on BMI from baseline to 1-year follow-up, medical assistants at each site measured each study child's weight and height to calculate BMI. Weight was measured without shoes using an electronic, calibrated scale; height was measured using a stadiometer. The researchers calculated BMI as weight in kilograms divided by height in meters squared. Trained research staff measured target behavioral outcomes for television and video viewing time for each child by telephone interview at baseline and the 1-year follow-up. The following questions measured daily television viewing time:

3. About how many hours is the television on in your home each day?

The interviewer asked the parent respondent to write down the hours per weekday/weekend or note less than 1 hour per weekday/weekend. For the third question, the parent respondent wrote down the hours per day the television was on in the home, note less than 1 hour per day, or note there was no television in the home. Questions from a child food frequency questionnaire measured daily sugar-sweetened beverage intake and daily fruit and vegetable intake. 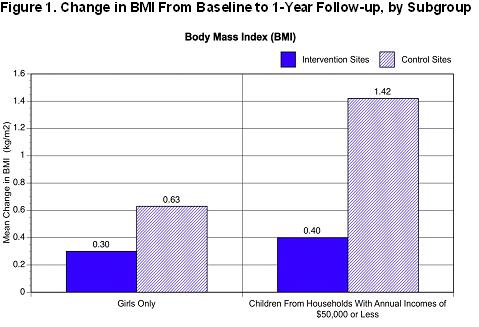 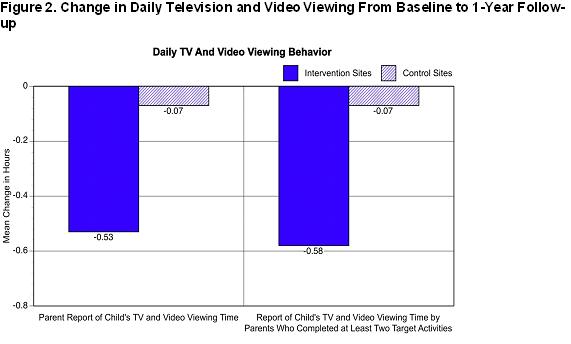