Designed to increase the consumption of fruits, vegetables, and lower-fat foods among seventh and eighth graders, this school-based intervention consists of a 10-lesson classroom component teaching self-monitoring, goal setting, snack preparation, and skills for choosing healthy foods; a school-wide component to increase the offering and promotion of healthy foods; and a family component providing newsletters with tips for healthy eating and shopping. The study showed increases in intentions to select lower-fat foods and in the proportion of healthy foods offered a la carte in cafeterias.

Unhealthy dietary choices puts adolescents at an increased risk for immediate and chronic disease, including cancer. Low intake of fruits, vegetables, whole grains, and calcium and excessive intake of fat, saturated fat, and sodium can lead to obesity, Type 2 diabetes, low bone mass, and various adult-onset chronic diseases. Eating more vegetables and fruits has been linked to a lower risk of lung, oral, esophageal, stomach, and colon cancer. School-based interventions are an effective way to access youth because of the amount of time youth spend in school and the influence of physical, social, and normative environments within the school. The early adolescent period is particularly critical to health; adolescents face new challenges in making healthier choices as their physical and social environments change due to school transitions and as they become more autonomous in their food choices.

Teens Eating for Energy and Nutrition at School (TEENS) is a school-based intervention intended to increase students' intake of fruits, vegetables, and lower-fat foods. The theory-based program consists of classroom, school-wide, and family components implemented in the seventh and eighth grades. The classroom component includes 10 nutrition education lessons for grade 7 and another 10 lessons for grade 8. The lessons focus on self-monitoring, goal setting, hands-on snack preparation, and skill development for choosing healthy foods and for overcoming barriers to making healthful choices. Trained peer leaders are used in the first year to help deliver segments of the curriculum, and in the second year the program includes activities to show students the connection between cues, reinforcements, and eating behavior.

The school-wide component involves working with food service managers and staff to increase offerings and promotion of fruits and vegetables and healthier snacks and to create an environment where healthy food choices are easier and more accepted.

The family component of the intervention includes three newsletters and sets of behavioral coupons delivered in conjunction with the classroom lessons for each grade. Each newsletter includes a short lead article and tip sheets for eating more fruits, vegetables, and lower-fat snacks. The behavioral coupons have simple, specific messages such as "Buy pretzels instead of potato chips the next time you shop". Parents of students participating in the study were offered an incentive for complying with the coupons.

The time required varies among the three components used to deliver the intervention. For the classroom component, the TEENS curriculum is delivered in 10 classroom sessions each year for two years. Each lesson is approximately 45 minutes. Teachers are also required to attend a full day of training each year, and seventh-grade peer leaders attend a full-day training the first year. For the family component, time required for parents varies according to the extent to which they follow the advice of the newsletters and behavioral coupons (e.g., preparing and serving a fruit or vegetable with dinner) to foster healthier eating habits. Participants involved in the school-wide component (e.g., school administrator, food service staff) should meet monthly to work on policies related to improving the availability of providing healthier foods in the school as well as ways to promote healthier food choices.

The intended audiences for this program are seventh- and eighth-grade students, their parents, district food service directors, and local school food service managers and staff.

The intervention is suitable for implementation in the school and home. It is recommended that the classroom component be implemented in family and consumer science, home economics, health, or science classes.

The TEENS seventh- and eighth-grade teacher training manuals, TEENS video and audiotapes, and TEENS Peer Leader Manual are required. Information on costs associated with the program is not provided. Teachers are required to attend a one-day training each year.

At baseline and followup, TEENS evaluation staff collected data over a 5-day period on the number of food and beverage items that were offered and sold on a la carte lines (available in the cafeteria and not offered as part of the meal pattern lunch). Data were summarized into categories of "foods to promote" (e.g., snacks with 5 or less grams of fat, 100% fruit juice, water and low-fat milk, fruits and vegetables, and other lower-fat versions of popular entrees such as pizza or pretzels with cheese) and "foods to limit" (e.g., snacks with more than 5 grams of fat, fruit drinks, and higher-fat popular entrees such as regular pizza or nachos). 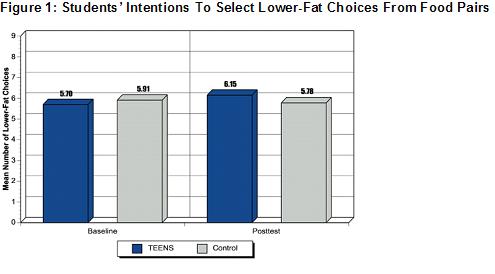 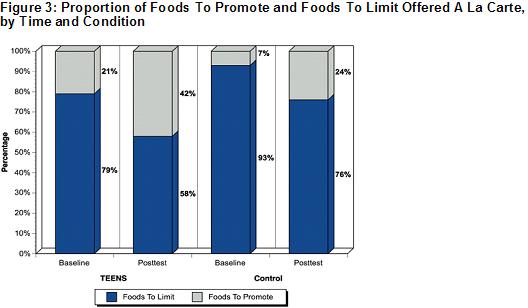