For inquiries related to staff training or program implementation, please contact the Principal Investigator (P.I.), Paul Veugelers at: paul.veugelers@ualberta.ca or 1-780-492-9095.

Childhood obesity has more than doubled in children and quadrupled in adolescents in the past 30 years. Nearly 18% of children aged 6-11 years and 21% of adolescents aged 12-19 years were obese in 2012, according to the Centers for Disease Control and Prevention, compared with 7% and 5%, respectively, in 1980. Obese youth are more likely to have risk factors for cardiovascular disease, such as high cholesterol or high blood pressure. They are at greater risk for bone and joint problems, sleep apnea, and social and psychological problems, such as stigmatization and poor self-esteem. Obese youth also are likely to be obese as adults and therefore at greater risk for adult health problems such as heart disease, type 2 diabetes, stroke, several types of cancer, and osteoarthritis.

The Alberta Project Promoting active Living and healthy Eating (APPLE Schools) is a health promotion intervention developed to help elementary schools in socioeconomically disadvantaged areas of Alberta, Canada, implement a customized comprehensive school health (CSH) plan to improve physical activity and healthy eating among their students. Based on principles laid out in the World Health Organization's Ottawa Charter on Health Promotion (1986), CSH is an integrated approach to health promotion involving education and the whole school environment. A CSH intervention includes actions addressing each of the four "pillars" of school health: teaching and learning, physical and social environments, healthy school policy, and partnerships and services.

APPLE Schools' approach to CSH requires at least a 3-year commitment from a school and centers on the use of a full-time, trained school health facilitator to guide the entire school community in creating an environment that supports student health. The intervention does not require the school to implement any specific health programming or policies. The school health facilitator has several key responsibilities. He or she initially spends time observing and learning about the school's existing health-promoting activities and policies while building relationships with teachers, administrators, students, and parents. The facilitator then assembles an "APPLE Core team" of stakeholders and works with the team to develop an action plan customized to the needs of the school. The plan specifies what programs and policies will be implemented for each of the four "pillars" of CSH. A school's action plan might include, for example, planting classroom or community gardens, offering healthy hot lunches, providing after-school cooking classes for students and their families, or scheduling family fun nights in the gym. The facilitator also makes resources on nutrition and physical activity available to teachers (e.g., lesson plans, planning tools, handouts, teacher guides, promising practices, educational kits); contributes to curricular planning for both instructional and non-instructional school time; schedules professional development days for teachers and school staff; coordinates community activities and events; and circulates the APPLE Schools newsletter.

Changes in students' diets, activity levels, and body weight are measured each year through surveys, and the results are used by the facilitator and APPLE Core team to update the action plan. To ensure the necessary degree of coordination and support, APPLE Schools requires the school principal to make the following commitments. The principal must agree to dedicate time personally to the project; sustain the intervention at the school for 3.5 years; participate in ongoing and new research led by the University of Alberta research team that developed and continues to evaluate APPLE Schools; provide office space and access to infrastructure support for the facilitator; include the facilitator as part of the school staff; create supportive healthy living school policies; and participate in meetings with other APPLE Schools' administrators and health facilitators.

The school health facilitators receive 6 weeks of training in physical activity, nutrition, creating positive social environments, and facilitation strategies to foster increased capacity and sustainability of the intervention. They also receive ongoing professional development and yearly refresher training. Facilitators from different APPLE schools provide peer support to one another and share work experiences and successful resources when they come together for ongoing professional development and training. Facilitators and schools have access to the APPLE Schools website, which is updated regularly and includes materials prepared for teachers, outlines for whole school events, health fair ideas, useful web links, curriculum-related materials, community connections, specific information related to nutrition or physical activity, and a web page for project administration related issues and funding available to support and maintain program implementation. Each APPLE school is required to undergo a yearly evaluation carried out by the University of Alberta's School of Public Health.

-- 6 weeks of initial training for the school health facilitator, plus 6 days of yearly refresher training
-- 40 hours per week over the school year for health promotion planning and coordination by the facilitator
-- 3-4 hours per month of dedicated time for the school principal, plus 2.5 days per year for meetings in support of the program
-- 2-6 hours per month for parent and community involvement activities, such as after-school cooking clubs for students and parents, after-school physical activity programs, family fun nights in the gym, and classroom and community gardens; activities will vary by school
-- 1-3 hours per month for APPLE Core team meetings (moderated by the school health facilitator) to create, review, and modify school health action plans and policies
-- 10-15 hours yearly to support the research teams that conduct on-site evaluations at each APPLE school

A 3-year, quasi-experimental, pre/post study with a non-equivalent comparison group evaluated the effects of APPLE Schools on diets, activity levels, and body weight/obesity among fifth-grade students. Fifth graders were targeted because most are pre-pubescent and therefore not yet affected by the differential changes in weight and body composition and the decrease in physical activity associated with puberty. School jurisdictions in Alberta, Canada, were asked to identify elementary schools in socioeconomically disadvantaged neighborhoods with principals who wanted to support healthy eating and active living among their students and were willing to participate in a research study. Ten schools in five jurisdictions were recruited. These schools began implementing the intervention in January 2008, and the intervention period ended in June 2011. The comparison group consisted of two randomly selected subgroups of all publicly funded elementary schools in Alberta. Data for these schools were obtained from the 2008 and 2010 Raising Healthy Eating and Active Living Kids Alberta (REAL Kids Alberta) survey. This survey was part of a study that collected data on health, nutrition, physical activity, lifestyle factors, and measures of height and weight among fifth graders to evaluate the impact of the provincial government's Healthy Weights Initiative to promote healthy weights among children and youth. All schools in the study (intervention and comparison groups) received materials related to the Healthy Weights Initiative, and all were subject to a province-wide policy mandating that schools with grades 1-9 provide students a minimum of 30 minutes of daily physical activity during school days. The key difference between study groups was the use of a school health facilitator at intervention schools to develop customized action plans meeting each school's individual needs as well as the requirements of the province's Healthy Weights Initiative and physical activity policy. The instruments used to measure outcomes were the same for both study groups.

In the intervention schools, cross-sectional samples of students in grade 5 were recruited in the spring of each school year to participate in assessments. Data were obtained for 293 fifth graders in 2008, 344 in 2009, and 394 in 2010. For the comparison schools, REAL Kids Alberta survey data were obtained for 3,421 fifth graders from 148 randomly selected schools in 2008 and from 3,398 fifth-graders from 151 randomly selected schools in 2010. Because the REAL Kids Alberta survey was not administered in 2009 and 2011, no comparison group data were available for those years.

Daily caloric intake (kcal) was measured based on student responses to the Harvard Youth/Adolescent Food Frequency Questionnaire (FFQ), using calorie counts for food items in the Canadian Nutrient File (CNF), one of two databases published by Health Canada that list the nutrient values in Canadian foods.

Self-reported, moderate to vigorous physical activity levels over the past 7 days were measured using the Physical Activity Questionnaire for Older Children (PAQ-C). PAQ-C scores range from 0 to 5, with higher scores indicating higher levels of physical activity.

Body weight was measured to the nearest 0.1 kilogram on calibrated digital scales after students removed their shoes, and standing height was measured to the nearest 0.1 centimeter. Body mass index (BMI) was calculated as weight in kilograms divided by height in meters squared (kg/m2). Obesity was defined using the International Obesity Task Force BMI age- and sex-adjusted cutoff points for children and youth. 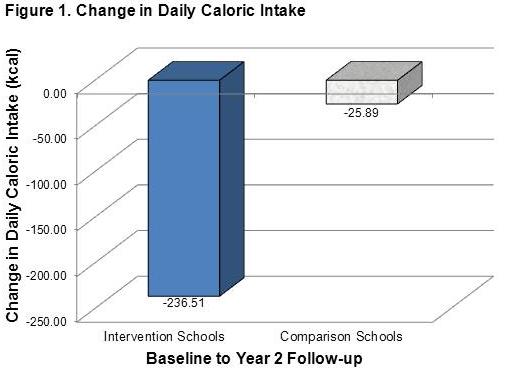 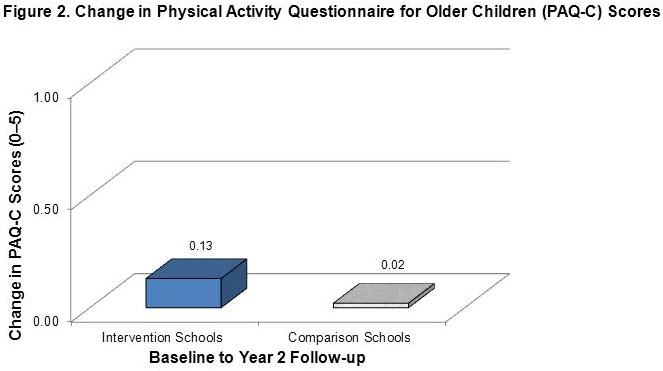 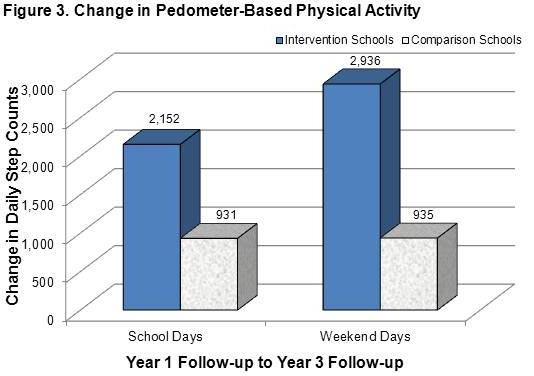