Young children must be physically active to acquire motor skills, increase their physical fitness, and obtain the physiological and psychological benefits from physical activity. Though nearly all American elementary school students participate in physical education (PE), these classes often do not provide sufficient physical activity. For example, observations have revealed that some PE specialists provide students with only 3 minutes (10% of class time) of moderate to vigorous physical activity per class. PE programs should promote generalization of physical activity outside school as well as during the class period because the national recommendations for physical activity cannot be met during class time alone.

The SPARK program (Sports, Play, and Active Recreation for Kids) is designed to promote high levels of physical activity among students in PE classes and outside school. First developed for and evaluated with fourth and fifth graders, with some third graders participating via split classes, SPARK has since expanded to include multiple curricula for pre-kindergarten through high school.

The original program consisted of a PE component and a self-management component. The PE component included 10 in-school health-fitness related activity units (such as aerobic dance, aerobic games, walking/jogging, and jump rope) and 9 skill-fitness activity units (such as basketball, Frisbee, and soccer). The recommended frequency of PE classes was 3 days per week, 30 minutes per session (15 minutes for health-fitness activities and 15 minutes for skill-fitness activities). The self-management component was a classroom-based program that promoted behavioral change skills to help children increase the amount of regular physical activity they engaged in away from school. It included self-monitoring, goal setting, stimulus control, self-reinforcement, self-instruction, and problem-solving techniques. Self-management was taught in weekly, 30-minute sessions, guided by scripted curricula.

In the original evaluation of the program, SPARK PE classes were designed to be at least 30 minutes in length and meet at least 3 days per week during the academic year. SPARK self-management classes were designed to be 30 minutes in length and meet once per week. Teacher training was required, and the study provided 30 hours of training in Year 1, 15 hours in Year 2, and less than 10 hours in Year 3. Teachers met with onsite facilitators during implementation. Consultation also was made available to teachers as needed.

The original audience for this program was fourth- and fifth-grade elementary school students and their PE teachers. Additional curricula, professional development, and follow up support models have been developed since the initial study.

The materials for SPARK have been updated since the original evaluation and can be obtained by contacting the developer. The central product is the SPARK PE curriculum, presented in a three-ring binder for easy access to lessons. Additional required materials include a media disc that holds supplemental skill and task cards, assessment tools, "Homeplays", and more; a music CD created specifically for the SPARK content and activities; and a SPARK folio that provides hard copies of the content provided on the media disc.

Seven elementary schools participated in the study. The schools were stratified into two groups by the percentage of minority students. Within each stratum, one school was randomly assigned to each of the three experimental conditions: specialist-led, teacher-led, or usual PE control. The specialist-led condition included three certified PE specialists. Classroom teachers in the teacher-led condition participated in training to become familiar with the curricula and to develop the class-management and instructional skills needed to implement the two SPARK components effectively. Generalist teachers and specialists from the intervention conditions received ongoing training and supervision. Over the course of the academic year, fourth- and fifth-grade students in both intervention conditions participated in 30-minute PE classes at least 3 days per week and received weekly self-management classes. Principals of control schools were asked to continue with usual PE programs during the study.

The 955 students who participated in the study were in fourth grade at the beginning of the 2-year intervention; the ethnic distribution was 82% White, 12% Asian/Pacific Islander, 4% Latino, and 2% Black. Fifty-three percent were male, and the average age was 9.5 years.

The outcome measures were administered at the beginning and end of each school year. The SOFIT (System for Observing Fitness Instruction Time) was used to make direct observations about the amount of PE per week the students engaged in, as well as children's level of physical activity. The mile-run test and 60-second sit-up test were used to measure cardiorespiratory endurance and abdominal strength and endurance, respectively.

Posttest scores, adjusted for baseline age and baseline values, were analyzed using modified one-way analyses of variance (ANOVA) to test for differences among the three experimental groups. The ANOVAs were modified to account for clustering of values within schools, because school was the unit of assignment. 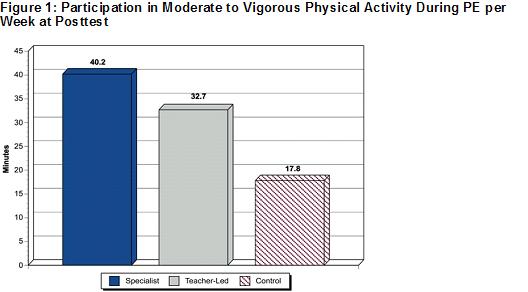 Effects on Amount of PE 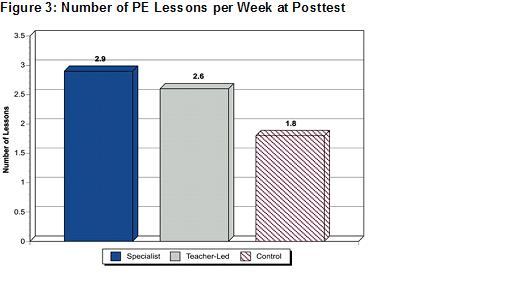 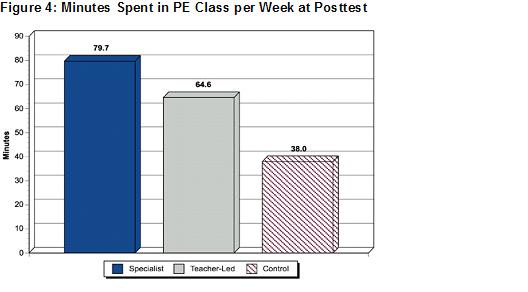 Effects on Abdominal Strength and Endurance and Cardiorespiratory Endurance 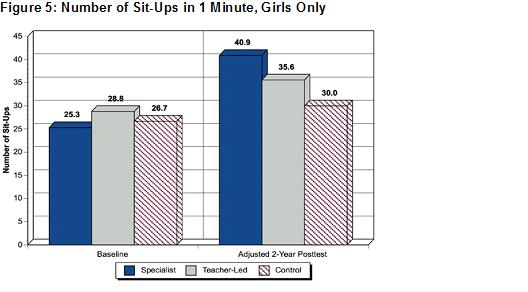