Up to one in six individuals will develop some form of skin cancer (basal, squamous, or melanoma) during their lifetime. Current estimates predict that one in four individuals who develop melanoma will be under age 40. This is attributable to high-risk ultraviolet radiation exposure such as intentional sunbathing, inadequate sun protection, and the use of tanning lamps and salons by young individuals. The direct cost of treating melanoma has been estimated at $563 million annually in the United States alone, making the condition a large economic burden as well as a significant public health issue.

While several youth sun safety interventions have been shown to result in positive changes in attitudes and behaviors toward sun-risk behaviors, the actual quantity and frequency of youth sun-risk behaviors, such as intentional sun exposure and low sun protection, continue to increase. This suggests a growing need to develop effective interventions that reach a maximum number of children with minimal time and cost. While most skin cancer prevention programs for young adolescents are school-based, this program is designed to reach children at home.

The Skin Cancer Prevention program is designed to prevent skin cancer in young adolescents by teaching parents how to develop good communication patterns with their children. The program guides parents through the process of effectively communicating about the risks of skin cancer, and encourages their children to avoid high-risk behaviors and increase positive sun-safe behaviors.

Parents are provided with a handbook that begins with an introduction to the problem of skin cancer and ultraviolet exposure. It provides an overview of the incidence of skin cancer, various basic facts about sun-safe and sun-risk behaviors, and the consequences associated with ultraviolet (UV) exposure. The handbook also helps motivate parents to talk with their children by emphasizing that such discussions can make a difference both in improving their relationship and in reducing their children's susceptibility to skin cancer. The handbook approaches the topic of skin cancer prevention from cognitive, social, emotional, and decisionmaking perspectives. Parents read the handbook, then initiate conversations with their children based on the handbook's contents to discuss topics such as skin cancer, high-risk sun behaviors, and positive sun-safe behaviors.

The primary audience for this program is the parents of young adolescents, aged 9-12 years.

The program is designed to be administered at home.

The program toolkit includes the following:

The intervention was given to the parents in the experimental group at the beginning of the summer (i.e., the last 2 weeks in May). Parents were asked to comment on the materials and return them at the beginning of June as a validity check to ensure they read the materials. Child participant assessment occurred approximately 45 days later, to allow time for parents to read and implement the intervention. Participants in the control group did not receive the intervention materials, but child participants were given a posttest assessment during the same time interval.

The main outcomes, which were measured at posttest only, included sunburn frequency, sunburn severity, and sunbathing tendencies. Sunburn frequency was measured by asking participants to estimate the number of times in the past 30 days their skin had become red because of sun exposure. Sunburn severity was measured using four items inquiring about the general severity of the sunburn, the degree that the sunburn peeled, pain associated with the sunburn, and the amount of difficulty the child had sleeping because of the sunburn. All items were measured on a 4-point scale (1= not at all; 2= slightly, 3= moderately; and 4= extremely).  Sunbathing tendencies were measured through six items addressing: intentional sunbathing, lying out in the sun to get a tan, and lying out in the sun to get color in the skin. Items were standardized and averaged to derive an index of sunbathing tendencies. 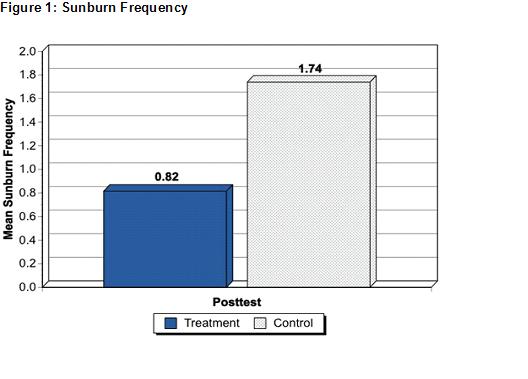 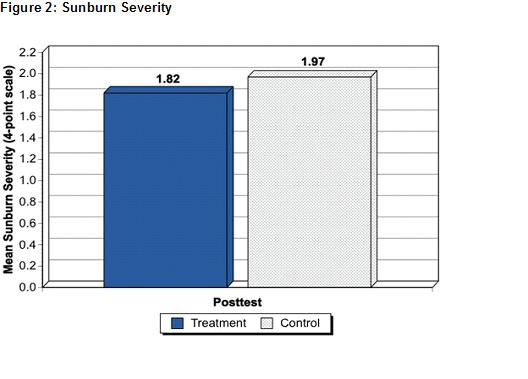 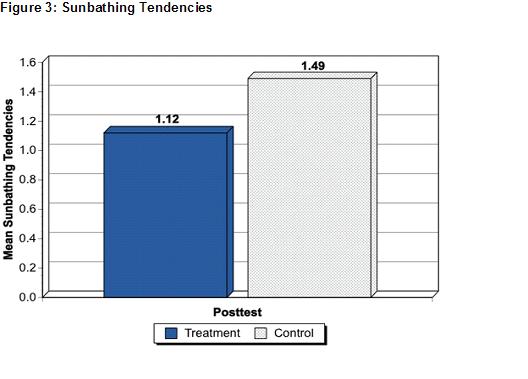 The Skin Cancer Prevention: Useful Information for Parents from the Fields of Behavioral Science and Dermatology program is related to the following: