Designed to increase awareness and sun protection behavior and practices among students in kindergarten through grade 8, this school-based intervention consists of a 1- to 2-hour sun safety unit with lessons on the effects of ultraviolet radiation, risk factors for overexposure, and sun-protection habits; supplemental activities; and data useful to schools and communities making day-to-day decisions regarding personal sun safety. The study showed an increase in students wearing a long-sleeved shirt.

In 2007, melanoma, the deadliest form of skin cancer, was diagnosed in an estimated 59,940 individuals in the United States. Skin cancer has been linked to unprotected and/or excessive exposure to ultraviolet (UV) radiation. Studies have shown that the occurrence of at least two blistering sunburns before the age of 18 may double the risk for development of melanoma as an adult. Primary prevention strategies for skin cancer include increasing knowledge and awareness in individuals, changing sun-protection behaviors, and implementing policy and environmental interventions. It is estimated that regular use of sunscreen during childhood could lower skin cancer incidence by nearly 80%. Starting positive sun-protection habits early may be key to reducing incidence. The SunWise Program, developed by the U.S. Environmental Protection Agency, is the first national health and environmental education program for sun safety of children in elementary and middle schools. The program was designed to ultimately reduce the incidence and effects of skin cancer and other UV-related health problems.

The E.P.A. SunWise Program is an environmental and health education program that aims to teach children in kindergarten through eighth grade (and their caregivers) how to safeguard against overexposure to the sun. The program provides information on stratospheric ozone depletion; the need to protect one's skin and eyes from excessive exposure; simple sun-protection steps; and accurate, timely, UV data useful to schools and communities in day-to-day decisions regarding personal sun safety. The free cross-curricular classroom lessons are contained in the SunWise CD-ROM Tool Kit, which is packaged as a 1- to 2-hour core sun safety unit. Lessons focus on three key areas: (1) the effects of UV radiation, (2) risk factors for overexposure, and (3) sun-protection habits. Supplemental activities are available to extend the lesson beyond the 1- to 2-hour core unit.

The E.P.A. SunWise Program is designed to be administered in 1 to 2 hours.

The E.P.A. SunWise Program is intended for children in kindergarten through eighth grade.

Required resources for the E.P.A. SunWise Program include the SunWise CD-ROM Toolkit.

A total of 130 schools nationwide participated in the E.P.A. SunWise Program from September 1999 to June 2000. Of the 130 participating schools, 65 were randomly chosen to receive surveys. Students at 40 of these schools completed pretests and posttests. One large school district served as a control site, receiving no sun safety educational program. Within this control district, students in seven of the nine schools completed both pretests and posttests. Respondents were between the ages of 5 and 12, although just over half the respondents (56%) were between the ages of 10 and 12. Participants completed the self-administered SunWise Student Survey at both pretest (fall) and posttest (spring), immediately after administration of the SunWise intervention. The SunWise Student Survey included questions on demographics (age, sex, hair color), knowledge (appropriate sun protection factor [SPF] for outdoor play, highest UV Index number corresponding with need for sun protection, need for hats and shirts outside), attitudes (tanning as good or healthy, whether suntan is good for the skin), practices (sunscreen use and parts of the body covered with sunscreen; use of hats, long-sleeved shirts, and sunglasses), and intended practices (sunscreen use and playing in shade for the upcoming summer). A single question asked children to report the number of sunburns experienced the previous summer. 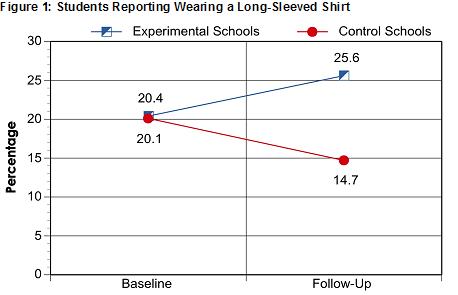