Designed to increase awareness and sun protection behavior and practices among middle school students, this community-based intervention uses active role modeling of sun-protective behaviors (e.g., by teachers, coaches, teens), peer-led activities in schools, branded program materials displayed in the community, patient education materials and sun protection messages provided by primary care practices, and use of a device that highlights skin damage from overexposure to ultraviolet radiation. The study showed increases in body surface area protected and any sunscreen use.

While several sun safety programs have targeted younger children, there is a great need to educate adolescents about the importance of sun protective behaviors. For this age group, peer influence and media messages often run counter to those from parents and public health professionals. During early adolescence, sun protection steadily declines as tan-seeking behaviors and pro-tanning attitudes increase. One study found that only 35% of middle school students protected themselves from sun damage, and 75% of teens had sunburns in the previous summer.

Skin cancer is currently the most common form of cancer in the United States, with rates increasing 3-5% per year. Exposure to ultraviolet (UV) radiation during childhood and adolescence, especially intense exposure causing sunburn, is a factor in the development of skin cancer during adulthood. Having one or more blistering sunburn before age 20 doubles one's risk of melanoma. It is therefore important to educate children and adolescents about sun-protective behaviors.

Teens receive the SunSafe health education program that includes use of the DermaScanTM, a device that provides a darkened environment with a mirror to view skin changes not visible under normal light to highlight skin damage from overexposure to UV rays. Teachers recruit a group of teens to serve as peer role models on "Sun Teams" that promote sun-protective behaviors. Sun Teams conduct outdoor events, poster contests, fundraisers for the American Cancer Society, and school and community health fairs, and provide videotaped performances of sun safety messages.

The primary audience for SunSafe in the Middle School Years is early adolescents in grades 6 through 8.

SunSafe is designed to be offered as a multi-component, community-wide intervention in the schools, sports/recreational facilities, primary care practices, and community venues (e.g., libraries, stores).

The SunSafe in the Middle School Years program includes the following materials:

This multi-component, community-wide intervention targeted members of communities in Vermont and New Hampshire from 2000 to 2003. To be eligible, communities had to have a middle school where grades six through eight were offered in one building, at least one primary care practice, and a freshwater beach or town swimming pool used primarily by local residents.

From the eligible communities, 10 middle schools were recruited in pairs matched for size and proportion of students eligible for federal free-lunch programs. Once the researchers had the buy-in of the schools, the schools were randomly assigned to an intervention or control condition through computer-generated numbers.

The participants included recreation directors, athletic coaches, teachers, primary care practice staff, and other community-based organizations, who were engaged in all 10 communities after the school had been enrolled.  Control communities were offered the intervention once the study was completed.  Children entering grades six to eight (ages 11 to 14) at the community beaches and swimming pools or school sponsored water activities were approached and screened for eligibility. If they were eligible, they were asked for their consent to be interviewed anonymously.

Cross-sectional samples of early adolescents were observed and interviewed in year 1, and in 3 subsequent years. Because of a dramatic decline in the number of older adolescents (those entering grades eight and nine, particularly nine) attending the beach and pool venues, data from year 3 were not included in the analyses. Trained observers visited the community beaches and swimming pools between 11:00 a.m. and 3:00 p.m. from June through August, when weather reports did not predict rain or heavily overcast skies.

Adolescents were asked about sunscreen application for each of four body areas (face/neck, arms, legs, and trunk) and the sun-protection factor (SPF) of any sunscreen they had used. They were also asked to show the sunscreen bottle to corroborate their self-report. The trained observers also noted the proportion of the individual participant's body surface that was protected from the sun by clothing, sunscreen, or shade. An inter-rater reliability of .90 was obtained for this measure. Observers noted the UV index and temperature during every hour of the observation period. They also interviewed participants regarding their propensity to burn, and whether key adults (school personnel, primary care staff, or coaches) had talked to them about sun safety.

Effects of the SunSafe in the Middle School Years Intervention on Adolescents' Sun-Protection Habits
At 2-year follow-up: 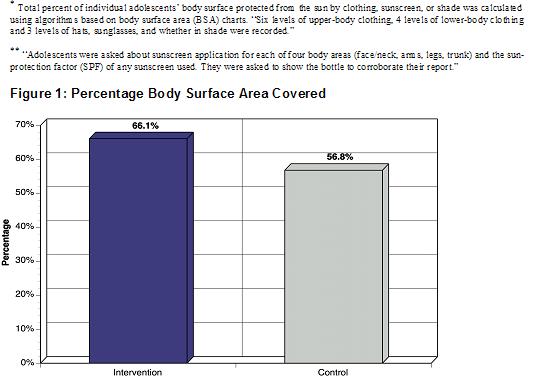 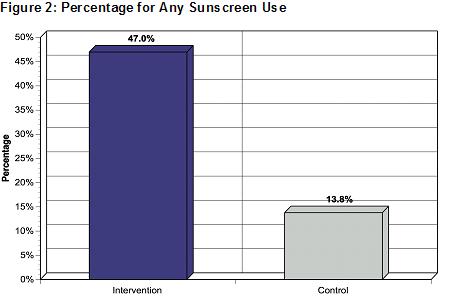 The SunSafe in the Middle School Years program is related to the following: