For inquiries related to staff training or program implementation, please contact the Principal Investigator (P.I.), Lori Crane at: Lori.Crane@ucdenver.edu or at 303-724-4385.

Details about Reach
40.0%
Details about Effectiveness
66.7%
Details about Adoption
N/A - Not Applicable
Details about Implementation
71.4%
This program has been evaluated on criteria from the RE-AIM framework, which helps translate research into action. Learn more about the ratings

The rates of melanoma and skin cancer are increasing rapidly in the United States. In Colorado, the incidence rate of melanoma is relatively high. The annual rate of new melanoma diagnoses in Colorado was 15% higher than the national average from 2002-2006 and was the 13th highest in the United States. Skin cancer is strongly related to sun exposure, with sun exposure in childhood appearing to be an important preventable risk factor for melanoma. Because early adoption of sun protection practices among children may reduce their incidence of melanoma as adults, interventions that promote communication between parents and children regarding melanoma risk factors and the use of sun protection practices are needed. Tailored messaging provides an opportunity to increase knowledge about sun exposure risks, the individual's level of risk, and the usefulness and barriers associated with sun exposure prevention. A tailored intervention delivered to parents and their children by mail may be an inexpensive approach to help raise awareness regarding sun exposure risks and melanoma.

The Colorado Kids Sun Care Program is a 3-year newsletter intervention for parents and their children that begins when the children are 6 years old. The intervention is based on the Precaution Adoption Process Model (PAPM), a theory of health behavior change that aims to produce changes in cognitive mediators (knowledge of risk, personalization of risk, perception of risk severity, perception of effectiveness of preventive strategies, and perception of barriers to prevention strategies), movement through the stages of change, and changes in behavior (in this case, sun protection behavior and sun exposure practices).

Parent newsletters are one to four pages and are written at approximately a sixth-grade reading level. The first parent newsletter in each annual series includes general information about skin cancer and its causes. The second parent newsletter in the first and second year is designed to personalize risk perception by providing tailored information about risk factors specific to each child, such as family history of skin cancer, at-risk phenotype (hair, eye, and skin color; freckling; tendency to burn/tan), history of sunburns, and high number of freckles or moles. Individualized risk information is collected through parent interviews and child skin exams to determine the child's level of risk. The personalized newsletter in year 1 contains information about the child's top 2 risk factors (there are 17 versions of this newsletter), while that in year 2 addresses all of the child's risk factors (there are 82 versions of this newsletter). All remaining parent newsletters discuss the effectiveness of sun protection strategies to reduce risk—such as wearing protective clothing, wearing a hat, staying in the shade, using sunscreen, and avoiding midday sun—and ways to overcome barriers to sun protection strategies.

Child newsletters include age-appropriate skin cancer and sun protection messages and activities (e.g., word searches, crossword puzzles). These complement the parent newsletters but could be used by children without parent involvement. Cover letters are sent with each mailing to describe the materials included in the packet. Mailings are sent using postal mail.

The time required to prepare mailings varies depending on the number of program participants. Mailings for 700 participants require approximately 60 hours for assessing children's specific risk factors (i.e., family history of skin cancer, at-risk phenotype, history of sunburns, high number of freckles or moles), tailoring mailings based on risk, sorting through materials, preparing and printing labels for mailings, and addressing and sending mailings.

The intervention is targeted to children ages 6 to 9 years and their parents.

A longitudinal randomized controlled trial evaluated the effects of the intervention on parent–child dyads who were assigned to an intervention group or a no-treatment control group. The study targeted outcomes related to sun protection behavior (wearing protective clothing, wearing a hat, staying in the shade, using sunscreen, and avoiding midday sun) and sun exposure. Intervention participants received the mailed newsletter intervention. The control group received a letter each spring inviting them to complete data collection.

Study participants were 867 Colorado children and their parents. Demographic data were presented for 686 children who were age 6 at the beginning of the 3-year study and their parents. Of these children, half (53%) were female. Seventy-five percent of their parents had a college education or higher, and 36% of households earned $100,000 or more. Of the 867 children in the study, outcome analyses were conducted using the 78% (677) who were White and not of Hispanic or Latino origin (i.e., those at highest risk for skin cancer).

Participating parents completed four telephone interviews using a computer-assisted telephone interview system with live interviewers. Baseline interviews were conducted between June and September, with follow-up interviews conducted during the same months each year thereafter for 3 years. The timing of interviews was balanced across the intervention and comparison groups. The interviews took approximately 20 to 30 minutes and solicited information on the parent's sun protection behaviors and the child's level of sun exposure. Parents were asked about sunny days when their child was outside for 15 minutes or longer between 11:00 a.m. and 3:00 p.m. and the frequency of their child (1) wearing clothes covering most of the arms and legs, (2) wearing a hat, (3) staying in the shade, and (4) using sunscreen. Parents responded using a 5-point Likert-type scale from 1 (never) to 5 (all of the time). Parents were also asked how many days per week their child is usually outside between 11:00 a.m. and 3:00 p.m. for more than 15 minutes and for how long the child is outside. Parent responses provided an estimate of the number of weekly outside hours during midday (range= 0-24). Midday sun scores were then recalculated on a 1-5 scale. A composite measure of sun protection behavior was created by summing scores on the five sun protection behaviors (wearing clothing covering most of the arms and legs, wearing a hat, staying in the shade, using sunscreen, and avoiding midday sun), with higher scores reflecting more frequent sun protection behavior.

Children completed four skin exams, one at baseline and one at follow-up each year for 3 years thereafter, at a Kaiser Permanente facility or at the University of Colorado Health Sciences Center. Appointments for 10-minute exams were available throughout the day to accommodate parent and child schedules. All skin exams were conducted by a doctor or nurse who looked for signs of sun exposure like moles, freckles, and tanning. Parents were asked whether their child had any severe sunburns (defined as blistering) or other sunburns each year. Participants from both study conditions who attended a skin exam received a letter informing them of the average nevus count among children examined in that year and the nevus count for their child. 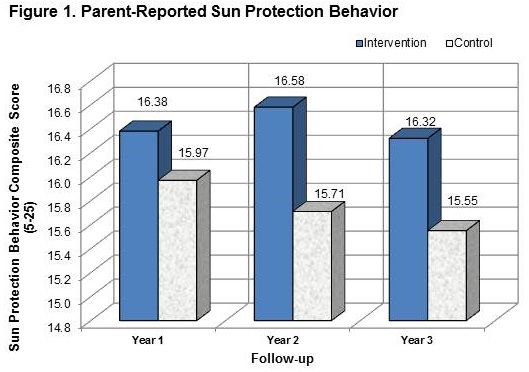 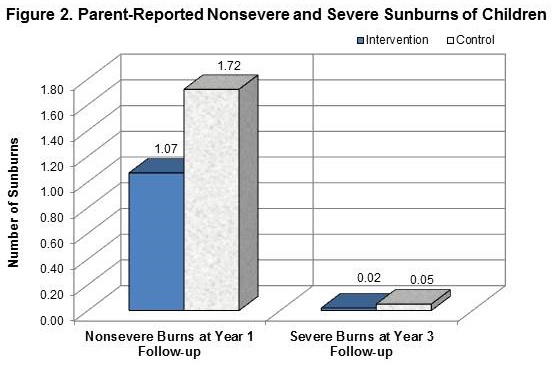