Colorectal cancer is the second-leading cause of cancer death in the United States. Colorectal cancer mortality can be reduced with screening. The U.S. Preventive Services Task Force recommends colorectal cancer screening (CRCS) for average-risk adults aged 50-75 years using annual fecal occult blood testing (FOBT) or fecal immunochemical testing (FIT); sigmoidoscopy every 5 years, with high-sensitivity FOBT or FIT every 3 years; or colonoscopy every 10 years. Despite these testing options, in 2010 only 58.6% of eligible adults aged 50-75 reported being up to date with guideline-recommended screening, and disparities in CRCS rates persist for socioeconomically disadvantaged populations.  In primary care sites serving these populations, financial constraints often limit CRCS options to FOBT or FIT. Successful and sustainable approaches to achieve high rates of FOBT or FIT in these settings may require multiple strategies, including using non-physician clinic staff to provide this testing to eligible patients at least once per year.

The Flu-FIT and Flu-FOBT Program allows health care providers to increase access to colorectal cancer screening by offering home tests to patients at the time of their annual influenza (flu) vaccination. The program is designed to increase CRCS rates by conveying the importance of screening and  getting an annual flu shot. The message to patients is that "just like a flu shot, you need FIT or FOBT every year."

Nurses or medical assistants are provided a variety of tools to assist with offering a home FIT or FOBT kit to eligible patients, including visual aids for explaining the test to patients (including foods to avoid to prevent false positive results), simple written instructions for how to self-administer the test, video instructions, and stamped envelopes for completing and returning the kit to the laboratory. These materials are provided in English, Cantonese, Mandarin, Russian, Spanish, and Vietnamese. Nurses are encouraged to use whichever materials they find most useful to encourage patients to complete FIT or FOBT.

The intervention takes just a few minutes per patient and is implemented concurrently at seasonal flu vaccination clinics. One to 2 hours of staff training are required initially, with periodic brief review and reinforcement of program procedures and progress by a practice team leader or supervisor during the intervention.

The Flu-FIT and Flu-FOBT Program is designed for patients aged 50-75 years who are both due for CRCS and receive annual flu shots during primary care visits or at drop-in flu shot clinics. Patients are considered due for CRCS if they have not had one of the following: FOBT or FIT in the past year, a flexible sigmoidoscopy in the past 5 years, or a colonoscopy in the past 10 years.

The Flu-FIT and Flu-FOBT Program can be implemented in community health centers, pharmacies, managed care organizations, and other health care settings where flu shots are provided and where FIT or FOBT is offered for average-risk colorectal cancer screening. To be successful, health care organizations offering Flu-FIT and Flu-FOBT Programs must be able to assure follow up of abnormal FIT or FOBT tests with diagnostic colonoscopy.

Required resources to implement the program include the following:
- Mailed FLU-FIT and FLU-FOBT announcements
- Clinic posters to advertise the program
- Algorithms for patient flow and for using electronic medical records to assess FIT or FOBT eligibility
- Script to introduce/explain FIT or FOBT with flu shots to patients
- Visual aids to use when offering FIT or FOBT to patients
- Multilingual materials to explain why colorectal cancer screening is important, completion instructions, and video instructions
- Pre-addressed and pre-stamped mailing pouches
- Log sheet to record flu shots and kits dispensed
- Clinic nursing staff

Downloadable, customizable versions of most of the required materials, as well as staff training slides and video demonstrations of how to use them, are available through the program website.

Study 1, published in 2011, was conducted in six community-based adult primary care clinics providing flu shots to eligible patients during primary care visits, with nurses often offering the vaccinations proactively without waiting for a physician's order. At the start of the study, CRCS was typically provided at these clinics only by physician order. Each clinic was randomly assigned to provide FOBT with flu shots (FLU-FOBT) or flu shots only (FLU-only) in alternating 1-week blocks. During FLU-FOBT weeks, nurses were given standing orders to offer FOBT, if due, to patients aged 50-75 years who received a flu shot. During FLU-only weeks, nurses had standing orders to provide FOBT to patients who received flu shots only if the primary care clinician ordered the FOBT as part of usual care. The blocks were arranged so that in any given week, three clinics performed the FLU-FOBT protocol and three clinics performed the FLU-only protocol, thereby balancing exposure to the intervention and control arms over the 18-week study period.

The study included 677 patients in the control group and 695 in the intervention group, for a total of 1,372 participants. The average age was 60. The sample was 54.9% male and 37.1% African American, 29.5% non-Latino White, 20.4% Latino, and 11.1% Asian American. Outcomes examined include completion of FOBT and any other CRCS tests, tracked using electronic medical records.

Study 2, published in 2009, was conducted at a primary care clinic providing flu shots within a large hospital. The flu shot clinics were run by multilingual medical assistants and health workers. Over a 3-month period, 17 half-day flu clinics were randomized into 9 intervention sessions, in which clinic staff provided flu shots and FOBT kits to patients eligible for CRCS by the end of the flu season, and 8 control sessions, in which staff provided flu shots only. The day before each flu shot clinic, a member of the research team reviewed the electronic medical records of scheduled patients to determine who was eligible for FOBT. The list of eligible patients was provided to the clinic staff so they would know in advance who needed FOBT. After their flu shots, eligible patients attending the intervention sessions were offered an FOBT kit with instructions and postage-paid return envelopes. Patients who did not return a completed kit within 3 weeks of receiving the kit received a telephone call reminder; those who did not return a completed kit within 6 weeks received another telephone call reminder.

The study included 246 patients in the control group and 268 in the intervention group, for a total of 514 participants. The average age was 64.7. The sample was 63.6% female and 52.1% Asian/Pacific Islander, 30.5% Latino, 8.8% non-Latino White, and 5.9% African American. The primary outcome, tracked using electronic medical records, was change in up-to-date CRCS status from being due for a screening test to having completed the FOBT. Patients were considered due for a screening test if they did not have FOBT in the past year, a flexible sigmoidoscopy or double-contrast barium enema in the past 5 years, or a colonoscopy in the past 10 years, or if they had any previously unevaluated abnormal FOBT results or recent unevaluated rectal bleeding.

Study 3, published in 2013, was conducted at five flu shot clinic sites operated by an integrated managed care organization for its members. Two sites participated in the first 2-month study period, and the remaining three sites participated in a second 2-month study period one year later. Each site provided a list of flu shot clinic dates to be randomly assigned to the intervention or control arms. Using blocks of 2 or 4 days, each date within each site was assigned to either the intervention arm (FLU-FIT arm providing FIT kits to eligible patients along with flu shot) or to the control arm (FLU-Only arm, providing flu shots only). On FLU-FIT days, the clinic staff were asked to provide FIT kits to eligible patients either immediately before their flu shot or while they registered for the shot. Patients' member cards and electronic medical records were used to identify patients eligible for CRCS. The clinic staff provided FIT kits to eligible members they identified, with any combination of brief verbal messages, such as "Just like a flu shot, you need to complete a colon test every year", "This test is free and could save your life", or "You can do FIT today and mail it in tomorrow." Patients with questions were directed to read the kit instructions (available in multiple languages with an added message about the importance of CRCS) or contact their primary care clinician.

The study included 2,884 patients in the FLU-only control group and 3,351 in the FLU-FIT treatment group, for a total of 6,235 participants. The average age was 61.5. The sample was 57.4% female and 46.6% White, 16.7% Asian/Pacific Islander, 5.7% Black, and 5.1% multiracial. Almost 22% identified themselves as Hispanic (21.7%).  The primary outcome, tracked using electronic medical records, was change in CRCS up-to-date status from being due for a screening test to having completed the FIT. Patients were considered due for a screening test if they did not have FIT in the past year, a flexible sigmoidoscopy in the past 5 years, or a colonoscopy in the past 10 years. 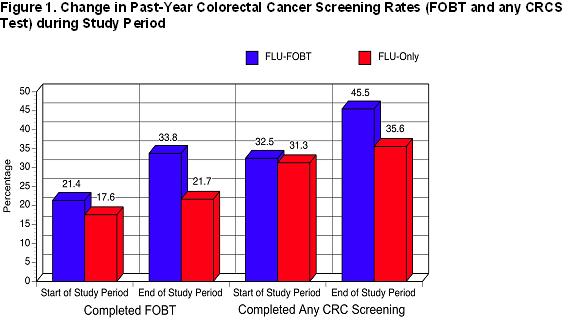 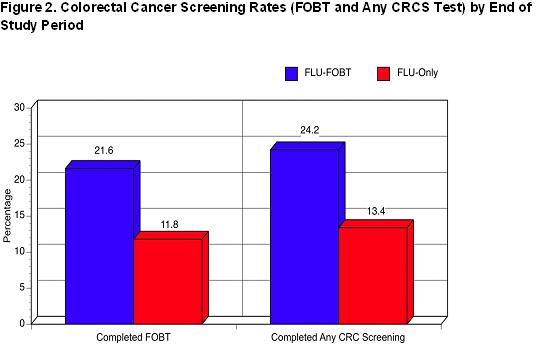 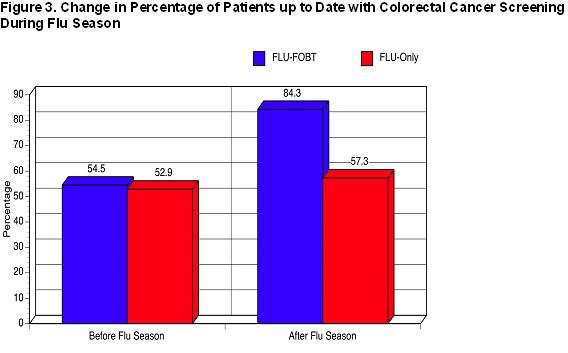 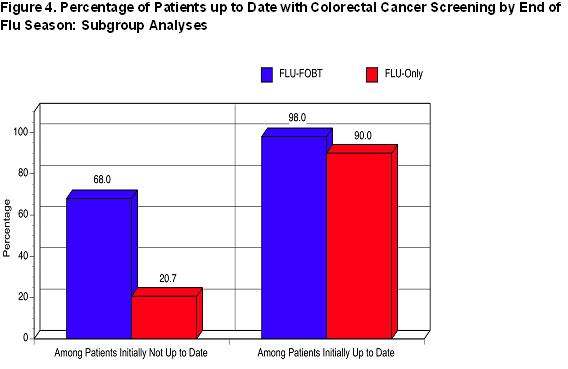 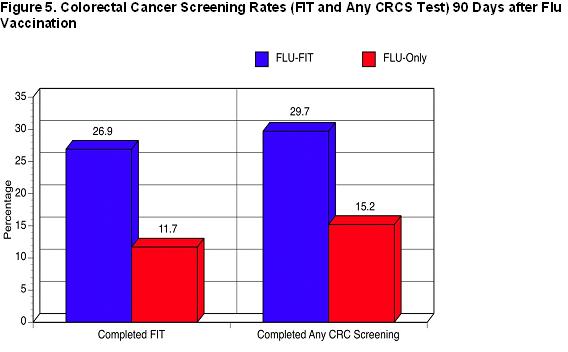 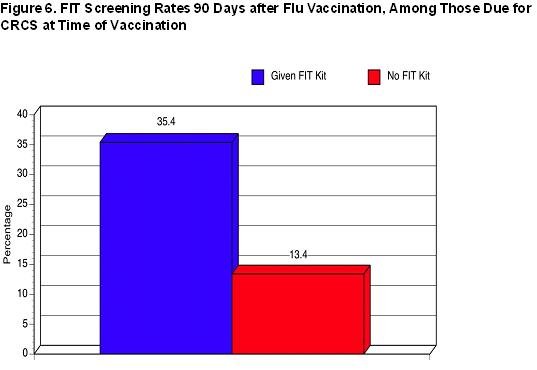 The program is designed to increase colorectal cancer (CRC) screening among low-income and uninsured adults.

Effect of a Mailed Brochure on Appointment Keeping for Screening Colonoscopy

Against Colorectal Cancer in Our Neighborhoods (ACCION)