Designed to enhance knowledge in the decision-making process for breast cancer screening among women aged 70 and older, this decision aid intervention is a booklet that contains information about mammography risks and benefits, a worksheet to help women clarify their personal values regarding those risks and benefits, examples showing how other women make the decision, and statistically estimated outcomes for women who continue screening or stop screening. The study showed an increase in the rate of making an informed choice regarding future mammography screening and an increase in mammography screening knowledge.

Details about Reach
80.0%
Details about Effectiveness
66.7%
Details about Adoption
N/A - Not Applicable
Details about Implementation
71.4%
This program has been evaluated on criteria from the RE-AIM framework, which helps translate research into action. Learn more about the ratings

Mammography screening reduces the risk of breast cancer death. However, screening carries inherent risks, including over-detection (identification of abnormal growths that would not become symptomatic during woman's lifetime) and over-treatment of breast cancer, as well as extra imaging and biopsies for abnormal growths that are benign (false positives). In particular, there are concerns about detecting and treating cancers in older women that, without screening, would not have affected the patients' health or life expectancy. In the United States, current guidelines no longer recommend screening for all women aged 75 and older, but women can choose to continue screening if they wish. Guidelines state that women should be given balanced information and that the decision to continue or stop mammography screening should be made by the individual after careful consideration of the possible benefits and harms. Provision of timely and accurate information is a high priority to support women in making an informed choice. There are few decision support tools that integrate this information through a systematic process, such as decision aids, which may provide a good foundation for informed decision making about screening.

Thinking About Continuing Mammogram Screening for Breast Cancer? A Decision Aid for 70-Year-Old Women is a booklet developed in Australia to help women who are 70 years and older decide whether they want to continue having mammograms to screen for breast cancer. The decision aid is a paper booklet that contains (1) educational information about mammography risks and benefits, (2) a worksheet to help women clarify their personal values toward those risks and benefits before deciding whether to continue screening, (3) hypothetical examples of how other people might make the decision, and (4) an appendix. Information on breast cancer screening options and outcomes is presented in a factual, non-directive way.

The screening outcomes presented in the Decision Aid (e.g., numbers of breast cancers detected and breast cancer deaths) are derived from a Markov model estimating outcomes for women who either continue screening for another 10 years (from age 69 to 79 years) or stop screening at 69 years, having previously been regular participants in screening. This model assumes a 37% relative risk reduction in breast cancer mortality for screened women, which includes adjustment for 100% participation in screening, and allows for the impact of declining life expectancy with age on the benefit of screening. Health care providers and policy makers in countries other than Australia may want to consider using their own data to develop numerical estimates for their populations.

The estimated time to read the Decision Aid and complete the worksheet is 20 minutes.

The Decision Aid is intended for women who participated in mammography screening in recent years and are now approaching 70 years of age. Other countries may want to consider using this decision aid for other audiences (e.g., American women approaching age 75 years of age). And will need to adjust the decision aid based on the statistics in the specific country.

The Decision Aid can be offered to women in any medical or other community setting.

The Decision Aid can be accessed online free of charge.

In an Australian study, potential participants were selected at random from records from BreastScreen NSW (part of BreastScreen Australia, a national population program which women access directly without physician referral). Women were eligible to participate if they were aged 70-71 years, had undergone two screening mammograms in the past 5 years, were due for their next mammogram within the next 3 months, and had not previously been diagnosed with breast cancer. After a baseline structured telephone interview to determine eligibility, 734 women were randomized to the intervention group (n=367) or control group (n=367). Women in the control group received the standard BreastScreen NSW brochure, which contains a small amount of information regarding screening at different ages, but no numeric information about the outcomes of screening.

Women were classified as making an informed choice if they had adequate knowledge and clearly defined values (based on the Values Clarity Subscale of the Decisional Conflict Scale) and expressed an intention to either continue or stop mammography screening. Knowledge of the benefits and harms of screening for women over age 70 was measured using four descriptive/concept questions (e.g., "Do screening mammograms detect every breast cancer?") and five quantitative/numerical questions (e.g., "Imagine 1,000 average healthy women, aged 70 years. How many of these women do you think will die from breast cancer over the next 10 years without mammography screening?"). Answers were scored using a marking scheme developed a priori, producing a score from 0 to 10, with a score of 6 or higher indicating "adequate" knowledge of the issues surrounding mammography screening.

This program was only evaluated for the RTIPs topic area, Informed Decision Making and not, Breast Cancer Screening. 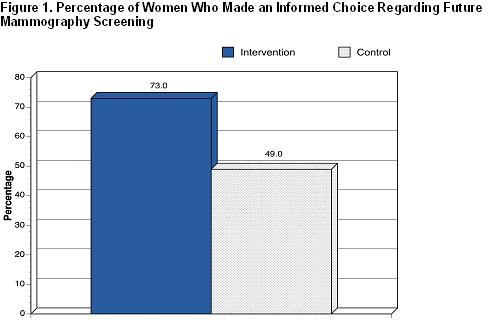 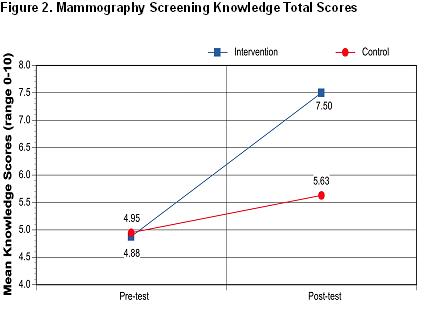 Designed to increase awareness about low-cost mammography screening options including the Medicare benefit for diverse racial/ethnic groups of elderly women.

Reducing Barriers to the Use of Breast Cancer Screening