Designed to promote breast cancer screening by encouraging African American women to schedule a mammography appointment, this community-based intervention is delivered by lay health advisors who promote awareness and use of screening among women in their communities and project staff who meet with local radiology practices to ensure screening compliance and conduct training with physician practices. The study showed an increase in mammography use.

For inquiries related to staff training or program implementation, please contact Alexis Moore at: alexis_moore@unc.edu or 919-843-7027

Details about Reach
80.0%
Details about Effectiveness
66.7%
Details about Adoption
N/A - Not Applicable
Details about Implementation
37.5%
This program has been evaluated on criteria from the RE-AIM framework, which helps translate research into action. Learn more about the ratings

Despite their lower breast cancer incidence rates, older African American women have higher breast cancer mortality rates than White women. This can mostly be attributed to African American women's lower rates of mammography screening and a tendency for the cancer to be diagnosed at a later stage. Breast cancer screening rates are also lower in disadvantaged populations across all races, including women in rural areas, women of lower socioeconomic status, and women without insurance coverage.

Lay health advisors have been proposed as an effective means of promoting breast cancer screening and other healthy behaviors.  Lay health advisors (e.g., peer volunteers, peer educators, lay community workers) are community members trained to act as links between the professional health care system and their own community. Studies conducted with disadvantaged populations have shown that lay health advisor interventions result in increased mammography screening among women recruited within their community.

After training, the lay health advisors work to promote awareness and use of breast cancer screening among women in their communities. Lay health advisors also engage in one-on-one conversations with women they know in the community, using culturally sensitive materials to reinforce their promotion of breast cancer screening. Informational items (e.g., brochures, posters, mammography information) are also distributed throughout the community in settings such as churches and beauty parlors.  The lay health advisors facilitate access to services by accompanying women to clinics, providing transportation to mammography facilities, and disseminating information about screening services.

With the assistance of community outreach specialists and lay health advisors, project staff members who have expertise in breast imaging meet with local radiology practices to ensure compliance with the Mammography Quality Standards Act and to raise awareness of African American women's barriers to mammography use. These teams also conduct brief training sessions with physician practices, community health centers, and health departments to promote breast cancer screening and mammography referrals among women who qualify for free breast cancer screening.

To administer NC-BCSP, time is required for:

- Community outreach specialists to be trained

The primary audience for NC-BCSP is African American women 50 years and older, living in rural areas or small towns (i.e., populations below 5,000).

NC-BCSP is designed to be administered in rural and small-town community settings.

NC-BCSP was evaluated using a nonrandomized community trial that took place in eastern North Carolina in five intervention communities and five comparison communities, geographically separated by Pamlico Sound. The two sets of counties had similar demographic, geographic, and cultural characteristics, as well as similar access to health care and mammography services. Two-thirds of the counties' adult residents lived in rural areas or small towns with populations below 5,000. Thirty-seven percent of the community members were non-White, and 12% lived below the poverty line.

Two cohorts of African American women were chosen by using a systematic random sample to select census blocks from each county. Interviewers canvassed door-to-door in 520 selected blocks and approached 2,355 households. Of these, 2,120 households with at least 1 woman who was 50 years or older and did not have breast cancer agreed to participate. A random selection was then made from among these eligible households. A total of 494 women in the intervention group and 499 women in the comparison group were interviewed at baseline. Baseline data were collected in 1993-1994.

The intervention communities received NC-BCSP, while the comparison communities did not receive any intervention. However, the Centers for Disease Control and Prevention's Breast and Cervical Cancer Control Program, which funds mammograms for eligible low-income women, became available in all 10 counties 1 year after initiation of NC-BCSP.

Follow-up data collection took place in 1996-1997 and included 390 intervention women and 411 comparison participants.  At both baseline and follow-up, trained female interviewers recruited from the community administered a 45-minute questionnaire in women's homes. In most cases, the 58 interviewers were matched in age and race to the women being interviewed. The baseline and initial follow-up interviews were conducted an average of 32 months apart for the intervention cohort (range 20-47 months) and 30 months apart for the comparison cohort (range 18-41 months). 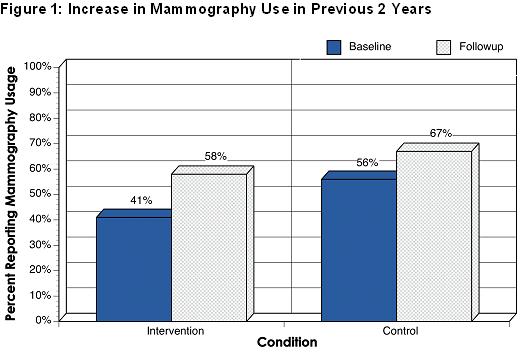 
(Be the first to write a review for this program)
Browse more Breast Cancer Screening programs
NCI does not endorse nor recommend any commercial products, processes, or services, nor do they guarantee the success of programs made available on the site. The views and opinions of authors expressed on this website do not necessarily state or reflect those of the NCI, and may not be used for advertising or product endorsement purposes. Rather, the information is provided to help you make an informed decision about the best program options to meet your cancer control needs. Please see the disclaimer for further information.