Designed to improve dietary habits to reduce obesity among seventh-grade children, this school-based intervention implemented by a wellness coordinator includes the following: (1) school-wide messaging; (2) cafeteria food changes and promotion to increase the number of students served lunch in the cafeteria and to increase fruit, vegetable, and water consumption and decrease school snack sales; (3) classroom lessons and activities; (4) parent-student activities; and (5) students serving as peer leaders to encourage and model healthy behaviors and engage other students. The study showed an increase in fruit servings, a smaller decrease in cafeteria lunches served, and a decrease in snack sales.

Currently in the United States, over 13 million children and adolescents are obese. Many health-related conditions are linked to obesity, including heart disease, stroke, type 2 diabetes, and certain types of cancer. Among children, including those from low-income households, obesity can be prevented through healthy eating habits and physical activity. Schools have a unique opportunity to teach students about the importance of healthy behaviors. To improve overall student health, the Centers for Disease Control and Prevention (CDC) recommends that schools promote healthy dietary behaviors and physical activity through programs that include students and their families. In addition, CDC recommends that parents help children maintain a healthy weight by balancing the calories their child consumes from food and beverages with the calories their child uses through physical activity and normal growth. School-based interventions that encourage nutrition and physical activity among children, including those who come from low-income households, are vital to decrease rates of obesity and related health problems.

Students for Nutrition and eXercise (SNaX) is a school-wide obesity prevention program for middle school students that promotes healthy eating and physical activity. In the randomized controlled trial (RCT), SNaX was designed as a 5-week program. The program has been modified over time to include some additional activities. The program currently available for dissemination is designed to be completed over the course of a semester. The intervention is based on social cognitive theories. Because school policies require schools to provide healthy food, one goal of SNaX is to increase the number of students served lunch in the cafeteria, including students eligible for free and reduced-price meals. Other goals include increasing fruit, vegetable, and water consumption and decreasing school snack sales.

A designated wellness coordinator manages the implementation of the program and follows the steps outlined in the SNaX Manual. The RCT intervention content consisted of five week-long units:

-- Unit 1, Hydrate for Health, conveys the importance of water consumption and the benefits of water relative to sports drinks, energy drinks, and soda.
-- Unit 2, Know Your Options, describes the healthy foods offered in the school cafeteria.
-- Unit 3, The Power of Fruits and Veggies, promotes the consumption of fruits and vegetables at school and at home.
-- Unit 4, On the Move, focuses on the benefits of physical activity.
-- Unit 5, Lose the Tube, encourages students to reduce their screen time (time using a television, computer, tablet, phone, or gaming device).

The content of these units is delivered through various components of the intervention:

-- School-wide messaging. Marketing tools to promote the program include a 30-minute video played at a school-wide assembly, weekly messages delivered using the school’s public announcement (PA) system, nutrition and physical activity posters and banners displayed in the school, and access to the SNaX mobile device application.

-- Cafeteria food changes and promotion. The cafeteria encourages healthier food consumption by setting up and maintaining hydration stations, ensuring that a greater variety of healthier options (e.g., sliced or bite-sized fruits) are served in the cafeteria, coordinating taste tests, and coordinating the placement of SNaX nutrition posters in or near the cafeteria.

-- Parent involvement. Parents complete SNaX parent activities with their child to learn more about healthy eating and physical activity. They are also encouraged to volunteer with lunchtime activities (e.g., taste tests) in the school.

-- Student involvement. Students are trained as peer leaders to encourage and model healthy behaviors and engage other students. They learn how to discuss SNaX messages with peers and family and then lead lunchtime sessions that involve discussing SNaX messages; conducting taste tests with samples from the cafeteria (i.e., water, fruit, vegetables); and distributing buttons, wristbands, and bookmarks.

This intervention is intended to be implemented in school and home settings.

Costs associated with the program’s implementation are not provided.

A randomized controlled trial conducted in Los Angeles, California, compared outcomes in five middle schools receiving SNaX with those of five middle schools in a wait-list control group. Eligible schools had a student body with at least half of students eligible for the National School Lunch Program (NSLP), to ensure a high proportion of low-income students, and less than 900 seventh graders. Randomization occurred at the school level. Over a 4-year period, the intervention was implemented school wide in each intervention school for one spring semester.

Across the sample (all students in all participating schools), 74.7% of students were Latino, 14.2% were African American, 5.7% were White, and 5.5% were Asian/Pacific Islander. The majority (84%) qualified for the NSLP’s free and reduced-price meals, and 19.8% were physically fit based on a physical fitness test that was administered by the school. The average number of seventh graders in each school was 484. At baseline, the groups did not differ on variables of age, gender, race/ethnicity, body mass index, NSLP eligibility, attitudes about eating cafeteria food, attitudes about drinking water, intentions to drink tap water, and water consumption. However, the groups did differ on baseline knowledge of healthy eating and physical activity, intentions to drink water from a refillable bottle, and likelihood of being born in the United States.

The main outcome measures were fruit portions served by the cafeteria, lunches served by the cafeteria, and snacks sales. These outcomes were assessed schoolwide at three time points (before, during, and after the intervention) through cafeteria and school store data. For each day of the intervention semester, the schools provided cafeteria records (number of students obtaining lunch by NSLP eligibility and number of fruit and vegetable servings) using point-of-sale data collected electronically, as well as school store data (number of snacks, such as cookies, sold) tracked using paper or spreadsheet files. The total number of students present each day was used to calculate a proportion that represented the fruit servings, vegetable servings, and meals served, as well as the number of snacks sold, per student per day, which was averaged for the days before, during, and after the intervention. The number of cafeteria lunches served was analyzed for all students and for students who were eligible and not eligible for NSLP.

Secondary outcomes were attitudes about eating cafeteria food, attitudes about drinking water, knowledge about healthy eating and physical activity, intentions to drink tap water, intentions to drink water from a refillable water bottle, tap water consumption, and water consumption using a refillable bottle. These outcomes were assessed among seventh graders using a survey at baseline and after the intervention. Most survey items used Likert scales. For example, one question asked, “On a scale from 0 to 10, how do you feel about drinking water?” with response options ranging from 0 (“very negatively”) to 10 (“very positively”). Water consumption was measured by asking, “How often do you usually drink tap water/use a refillable water bottle to drink water?” with the response options being “every day,” “a few times a week,” “once a week,” “twice a month,” “once a month,” “less than once a month,” or “never.” 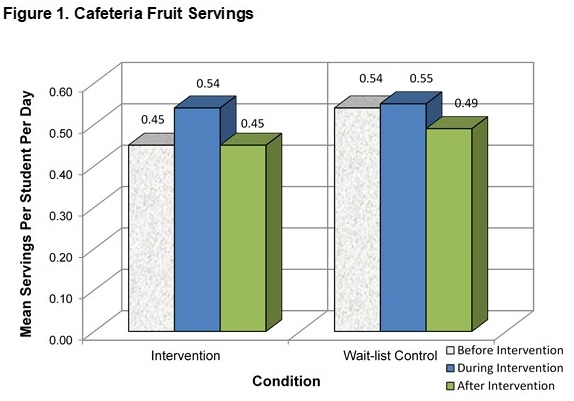 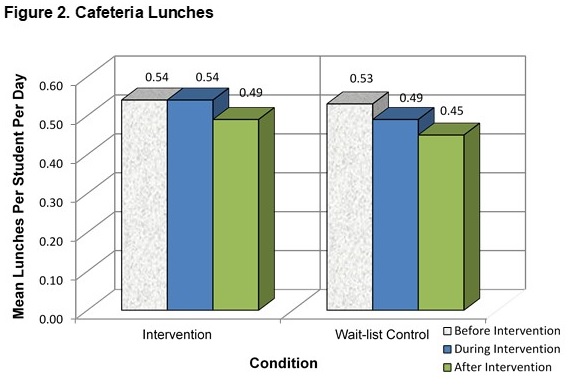 
(Be the first to write a review for this program)
Browse more Diet/Nutrition programs
Browse more Obesity programs
NCI does not endorse nor recommend any commercial products, processes, or services, nor do they guarantee the success of programs made available on the site. The views and opinions of authors expressed on this website do not necessarily state or reflect those of the NCI, and may not be used for advertising or product endorsement purposes. Rather, the information is provided to help you make an informed decision about the best program options to meet your cancer control needs. Please see the disclaimer for further information.