Designed to increase awareness and sun protection behavior and practices among students in grades 6-8, this cross-curricular school-based intervention consists of six 50-minute lessons intended to enhance the following behaviors: selecting and applying sunscreen; selecting sun-protective clothing, hats, and sunglasses; using shade; and minimizing time in the sun. The study showed a smaller decrease in wearing a long-sleeved shirt at recess and increases in using sunscreen at all times and staying in the shade.

Sun protection of children is a national priority. Individuals experience much of their lifetime exposure to ultraviolet radiation (UVR) during childhood, and severe sunburns before age 20 may increase lifetime risk of developing melanoma. Sun safety is not practiced by many fair-skinned children, with many becoming sunburned and tanning norms being evident.

The six comprehensive lessons are:

The SDHW, 6-8 program is designed for use in health education and science classes in middle schools.

The curriculum is available on CD-ROM for $48.99 plus shipping and handling and can be ordered by fax.  An order form is available at http://sdhw.info. Ordering information is also available by calling 1-877-258-2915, extension 3, or e-mailing info@SunnyDaysEd.com.

The SDHW, 6-8 program was evaluated to assess its impact on self-reported sun protection behavior using frequency ratings and diary reports. Schools were stratified by state and paired on several demographic variables. A school in each pair was randomly assigned to the intervention group. SDHW, 6-8 was compared with a control group receiving regular classroom instruction. Data were analyzed from 1,769 children from 28 middle schools in Colorado, New Mexico, and Arizona. Children were 57.2% female and 78.0% White, and ranged from 11 to 15 years of age.

Children completed diaries to report behaviors such as wearing covering during time spent outdoors at school the previous day. Additionally, a series of five-point frequency (1=always; 5=never) items assessed how often children applied sunscreen with sun protection factor (SPF) 15 or higher, wore clothes covering most of the body, wore a hat, limited time in the sun during midday, stayed in the shade, and wore sunglasses. A mean rating was calculated across the items. Secondary measures included frequency of lying in the sun to get a tan, being sunburned, the SPF of sunscreen used, and perceived importance of having a tan (1=not important; 4=very important). Sun safety knowledge was tapped with 10 true/false items, attitudes toward sun exposure and sun protection with 17 five-point Likert agree/disagree items, and self-efficacy expectations with four 3-point items (1=not sure; 3=sure). Children completed the survey in February or March and approximately 6 weeks later, after the intervention period in May.

Effects on Sun Protection Behavior
Compared to the control group, children in the intervention group reported: 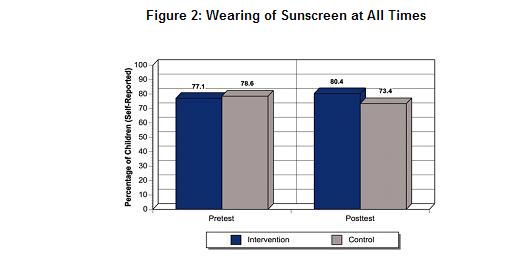 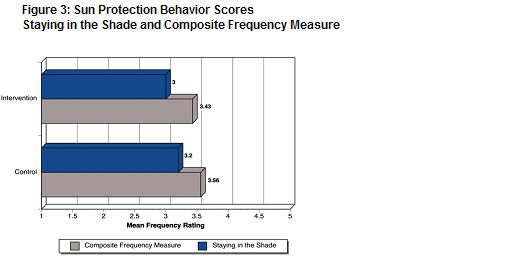 Effects on Self-Efficacy Expectations About Sun Safety
Children in the intervention rated the statement, "I can use a sunscreen of SPF 15 or more" higher (M=2.57) than those in control schools (M=2.38, p=.0069).

Effects on Perceived Barriers to Use of Sunscreen and Sun Protection
Children in the intervention demonstrated fewer barriers to sunscreen and to sun protection than those in control schools.

Effects on Attitudes Toward Sun Tanning
Children in the intervention rated the importance of a tan, perceived attractiveness of a tan, and desire to have a tan lower than those in control schools (p=.0013; p<.0001; p=.0026, respectively).