Designed to enhance skills for coping with breast cancer, this intervention consists of therapist-led group therapy sessions that help patients deal with their existential concerns and disease-related emotions, increase social support, enhance relationships with family and physicians, and improve symptom control. The study showed a decrease in trauma symptoms, improvements in mood disturbance, increase in survival time, and lower increase in pain and suffering.

Patients with chronic or terminal illnesses often experience psychosocial problems that can exacerbate their medical condition, including alienation, anxiety, and depression. Women diagnosed with breast cancer, in particular, often struggle with the stigma associated with cancer, issues regarding body image, fear associated with death, and the stress the disease places on interpersonal relationships. The resulting psychological stress can be considerable. It is estimated that 22 to 50% of patients with breast cancer meet criteria for a psychiatric diagnosis of depression, 3 to 19% meet criteria for posttraumatic stress disorder, and 33% meet criteria for acute stress disorder. Although a full posttraumatic stress syndrome might afflict only a minority of breast cancer patients, most investigators have found that clinically significant symptoms are relatively common. As many as 80% of breast cancer patients report significant distress during initial treatment. Since adjustment to metastatic disease is often more difficult than adjustment to the initial diagnosis, the need to find effective treatments for trauma symptoms in metastatic patients is all the more pressing.

Several decades of research provide evidence that many of the psychosocial problems that chronically ill patients experience respond to psychotherapeutic intervention. For women with breast cancer, there is evidence indicating the effectiveness of group interventions, with positive effects on psychosocial adjustment, physical status, mood, quality of life, and survivorship.

Most randomized group intervention studies have involved brief interventions and have included a focus on education, coping strategies, and emotional support. Some have also included stress management or behavioral training such as hypnosis or progressive relaxation. Most interventions were structured, with a predetermined schedule of topics to be addressed. The supportive-expressive method used in the present study differs in being relatively more extensive and intensive.

Supportive-expressive group psychotherapy was developed to help patients with breast cancer face and adjust to their existential concerns, express and manage disease-related emotions, increase social support, enhance relationships with family and physicians, and improve symptom control. The supportive-expressive therapy model involves the creation of a supportive environment in which participants are encouraged to confront their problems, strengthen their relationships, and find enhanced meaning in their lives. A major purpose of the therapy sessions is to create a close-knit group that can serve to counter feelings of isolation and enhance social support.

The intervention consists of weekly 90-minute unstructured therapy sessions involving 3-15 participants, led by two therapists (e.g., psychiatrists, psychologists, social workers) who are trained to facilitate discussion in an emotionally expressive rather than didactic format and who are self-trained in the delivery of the intervention. For breast cancer groups, it is helpful if at least one therapist is female. The following themes are discussed: (1) fears of dying and death, including dealing with the deaths of group members; (2) reordering life priorities; (3) improving support from and communication with family and friends; (4) integrating a changed self-image and body image; and (5) improving communication with physicians. Each session ends with a self-hypnosis exercise to help patients manage stress and deal with pain. Patients are encouraged to use this exercise at home.

Participants meet weekly for 90-minute support group sessions. Participants are encouraged to remain in the group for at least 1 year, although most women continue participating for as long as their health permits.

The intended audience for this intervention is women with confirmed metastatic or locally recurrent breast cancer.

Suitable settings for this intervention include hospital-based and outpatient oncology clinics or other community-based health facility centers.

Required resources for this intervention include:

Women with confirmed metastatic or locally recurrent breast cancer were randomized to intervention or control conditions. Women in both conditions were offered a self-directed education intervention, including 30 books, 15 pamphlets, 5 videotapes, and 7 audiotapes that they could select from and take home on loan, as well as a 1-year membership to a consumer health library in their community. Women in the intervention condition also received weekly 90-minute sessions of supportive-expressive group therapy.

Data were collected at baseline, every 4 months during the first year, and every 6 months thereafter. Traumatic stress symptoms were measured by the Impact of Event Scale (IES), a 15-item measure to assess symptoms of intrusion and avoidance that can occur in response to a potentially traumatic event. Participants were asked to rate on a 4-point Likert-type scale ranging from "not at all" to "often" the frequency of experiencing intrusive and avoidant symptoms during the past 7 days in response to having cancer. The two subscales were combined to give an IES total score. Total mood disturbance was measured with the Profile of Mood States (POMS), where participants rated the extent to which 65 mood-descriptive adjectives described how they felt during the past week. Ratings were based on a 5-point Likert-type scale ranging from "not at all" to "extremely." A total mood disturbance score was calculated based on each of the six subscales: anxiety, depression, hostility, confusion, vigor, and fatigue. Participant survival or death was determined for all participants by research staff communication with participants, family members, and/or physicians, or by consulting the Social Security Death Index. All reported deaths were confirmed by death certificate. Finally, pain level was measured by the Pain Rating Scale, which measures self-reported pain levels, using single Likert-type items. The scale assessed "pain in this moment", from 1 (not noticeable) to 10 (excruciating-worst ever) and "suffering in this moment", from 1 (easily bearable) to 10 (agonizing-unbearable). Pain in this moment and suffering in this moment were highly correlated and also averaged for use in the analyses. 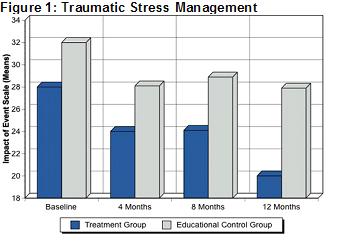 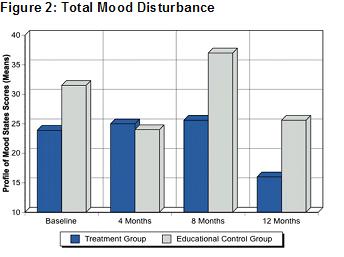 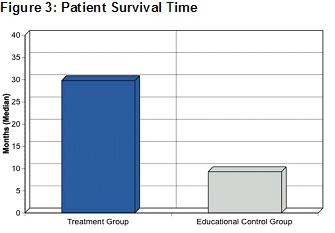 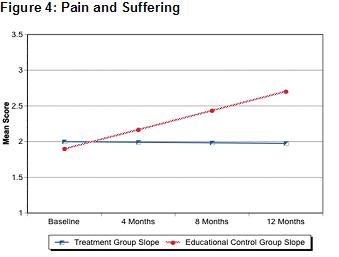 
(Be the first to write a review for this program)
Browse more Survivorship / Supportive Care programs
NCI does not endorse nor recommend any commercial products, processes, or services, nor do they guarantee the success of programs made available on the site. The views and opinions of authors expressed on this website do not necessarily state or reflect those of the NCI, and may not be used for advertising or product endorsement purposes. Rather, the information is provided to help you make an informed decision about the best program options to meet your cancer control needs. Please see the disclaimer for further information.