African American adults have one of the highest smoking rates and one of the lowest quit rates in the US, with disproportionately high rates of morbidity and mortality from tobacco-caused disease.  African American smokers are no less likely to make serious quit attempts, but are more likely to quit "on their own", without the benefit of evidence-based treatments that could double their quit rates. Two decades of research have shown favorable results with treatments that combine self-help materials with brief telephone cessation counseling. At the time of this study, the Cancer Information Service (CIS), sponsored by the National Cancer Institute, offered an effective population-based strategy for assisting smokers in diverse socio-demographic groups to acquire the motivation, skills, and support needed to quit smoking and remain nonsmokers.  Similar services are now provided through a national network of state quitlines accessible through a single portal: 1-800-QUIT-NOW.  However, African American smokers tend to underutilize these evidence-based quit-smoking help lines. African Americans' distinctive smoking patterns (e.g., daily smoking rate, menthol, high tar/nicotine cigarettes), and the unique quitting motives and barriers and cultural values in the African American community (e.g., lack of information about how smoking harms health, stronger smoking norms, pervasive targeted advertising, higher life stress) can be effectively addressed through tailored, culturally-appropriate quitline promotions, materials and evidence-based counseling.

The Self-Help Intervention for African American Smokers is a tailored intervention that introduces quit-smoking strategies through a culturally-appropriate self-help guide with personalized counseling. Through the program, participants receive the "Pathways to Freedom" smoking cessation guide, along with tailored, guide-based telephone cessation counseling to establish a personal quitting and maintenance plan. The 36-page guide is written at the sixth-grade reading level. It includes exclusively African American models, introduces quit-smoking strategies geared to the particular smoking pattern of African American smokers, and addresses the special obstacles African American smokers face when attempting to stop smoking and remain nonsmokers. CIS and similar 1-800-QUIT-NOW counselors use an interactive style to seek a commitment to the specific stage-based quitting or maintenance strategies presented in the guide. Participants are asked to identify their personal reasons for quitting and receive a personalized quitting plan. Specific recommendations are reinforced by means of sticky notes placed directly in the guide.

To administer the Self-Help Intervention for African American Smokers, time is required for:

-Smokers/quitters to read, refer to, and complete the brief exercises in the 36-page quitting guide (e.g., 1-2 hours over a period of 2-6 weeks)

Self-Help Intervention for African American Smokers is designed to be administered to participants in their homes via telephone.

Participants were randomly assigned to one of two treatment conditions based on the last digit in the primary telephone number given for follow-up interviews. The intervention group received a, CIS quit-smoking intervention that combined tailored, culturally-appropriate materials, and counseling addressing population-based and personal quit-smoking motives and barriers. The control group received the standard CIS quit-smoking intervention, which is a standard, stage-based counseling protocol, along with the National Cancer Institute's generic quit-smoking guide "Clearing the Air". The latter is a 24-page guide written at the eighth-grade reading level that depicts smokers and quitters from diverse racial/ethnic groups.

The participants in this study were 1,422 African American adult smokers who called one of four regional offices of the CIS (located in Durham, NC; Philadelphia, PA; Houston, TX; and Birmingham, AL) for free quit-smoking information and materials. To be eligible, participants had to be African American, current smoker/recent quitter (past 30 days), age 20 or older, with no previous use of the "Pathways to Freedom" tailored smoking cessation guide; they also had to consent to a 6-month, follow-up telephone interview. Most of the callers (>85%) contacted CIS in response to the population-targeted and culturally-tailored Quit Today! radio and television advertising campaign that ran within the service areas of these four CIS offices during a 23-month period. Only 3.5% of potentially eligible callers declined to give follow-up consent.

Follow-up assessments were conducted 6 months post-baseline by telephone interview. Interviews were administered using a computer-assisted telephone interview (CATI) format.  Six-month follow-up interviews were completed with 63% of respondents, but follow-up rates did not differ by condition (63.4% standard intervention, 62.2% tailored intervention).  An abbreviated 12-month follow-up interview was conducted with 445 participants accrued in the study during Year 2. Twelve-month interviews were conducted using an abbreviated version of the 6-month CATI interview format.  Of the 445 eligible participants, 59% completed the 12-month follow-up interview. Those who completed the 12-month interview were significantly more likely to be older and to not smoke within 30 minutes of awakening. There were no significant group differences in any of the baseline socio-demographic or smoking and quitting history variables within the overall sample. 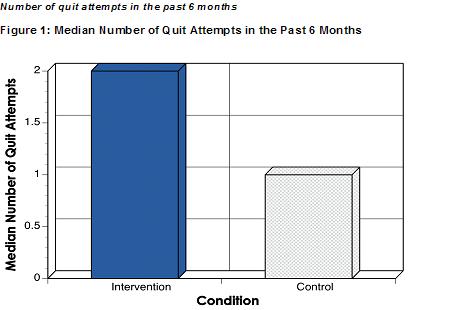 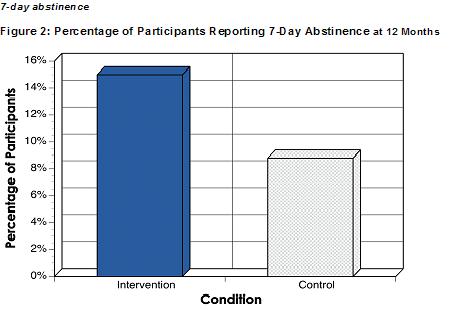 
(Be the first to write a review for this program)
Browse more Tobacco Control programs
NCI does not endorse nor recommend any commercial products, processes, or services, nor do they guarantee the success of programs made available on the site. The views and opinions of authors expressed on this website do not necessarily state or reflect those of the NCI, and may not be used for advertising or product endorsement purposes. Rather, the information is provided to help you make an informed decision about the best program options to meet your cancer control needs. Please see the disclaimer for further information.