Designed to promote smoking cessation and smoking prevention among adolescents, this clinic-based intervention consists of a discussion with a pediatric provider who follows the 5As model (ask, advise, assess, assist, and arrange follow-up) and a brief motivational interview and follow-up calls provided by a peer counselor. The study showed higher rates of cessation and continued abstinence.

The American Academy of Pediatrics cites reducing tobacco use by children, adolescents, and their parents and exposure to tobacco smoke among the highest priorities of the practicing pediatrician.  More than 6,000 children and adolescents try their first cigarette each day, and more than 3,000 children and adolescents become daily smokers every day, resulting in approximately 1.23 million new smokers under the age of 18 each year. Among adults who have ever smoked daily, 89 percent tried their first cigarette and 71 percent were daily smokers at or before age 18.  Youth greatly underestimate the addictiveness of nicotine. Of daily adolescent smokers who think they will not smoke in 5 years, almost 75 percent are still smoking 5-6 years later.  Clinical practice guidelines of the U.S. Public Health Service (PHS) recommend that clinicians screen pediatric and adolescent patients for tobacco use and follow up with smoking cessation counseling and behavioral interventions shown to be effective for adults. The content of the interventions should be modified to be developmentally appropriate for children and adolescents.  For smokers willing to quit, the PHS clinical guideline recommends smoking cessation treatment using the "5As" (ask, advise, assess, assist, and arrange for follow-up).

Air it Out is a pediatric practice-based smoking prevention and cessation intervention for adolescents (aged 13 to 17) delivered by pediatric providers and paid, older peer counselors (aged 21 to 25). The pediatric providers are pediatricians, nurse practitioners, physician assistants, and pediatric residents trained to deliver the provider component of the intervention using the 5As model (ask, advise, assess, assist, and arrange for follow-up) recommended by the PHS clinical practice guideline and the American Academy of Pediatrics, adapted for use with adolescents. The Air it Out intervention incorporates a patient-centered approach in which the providers ask about smoking, advise cessation or continued abstinence, and refer the patient to the peer counselor to develop a personalized strategy for cessation or maintained abstinence. To ensure intervention fidelity, a reminder algorithm for provider delivery is also attached to each adolescent patient's medical chart.  Trained peer counselors (former smoking college students), who quit smoking without pharmacologic aids and with difficulty, serve as role models and reinforce the 5As model within the context of a brief, motivational interviewing counseling session immediately after the provider. The content of the peer counseling follows a motivational interview format characterized by respect, collaboration, choice, empowerment, rapport building, reflective listening, effective questioning, and summarizing. The counseling is tailored to the adolescent's smoking status and adapted to incorporate triggers, strategies, and barriers to quitting that are relevant to adolescents. The peer counselors also deliver four 10-minute (booster) telephone calls at 2, 6, 12, and 21 weeks after the clinical visit.

- 1.5 hours of training for provider interventionists

- 26 hours of training for peer counselors

- Approximately 2-3 minutes for the provider-delivered component of the intervention, which is designed to be delivered during the course of a regularly scheduled clinical visit

- Four 10-minute booster telephone calls by peer counselors at 2, 6, 12, and 21 weeks after the initial clinical visit

The intervention targets adolescents aged 13 to 17 years, regardless of their current smoking status.

The intervention is delivered in a pediatric primary care setting during regularly scheduled, routine or acute care office visits.

A randomized clinical study evaluated the effects of a pediatric practice-based smoking prevention and cessation intervention for adolescents (aged 13 to 17) on tobacco abstinence rates at 6- and 12-month follow-ups.  Eight pediatric primary care clinics were stratified by size and randomly assigned to either the Air it Out intervention or a usual care control condition. Providers in the usual care clinics received no Air it Out training or materials to provide to patients.  All 13- to17-year-old patients scheduled for routine or acute care office visits were eligible to participate in the study, regardless of their smoking status. Study participants were recruited through letters on physicians' letterhead, telephone calls, and postings in the clinics. A research assistant met with interested adolescent patients at the clinic, and parental consent and youth assent were obtained. Because randomization occurred at the level of the practice, adolescent participants were not aware of group assignments, and providers only knew their clinic's assignment.  Air it Out intervention clinics received a 1-hour group training session for providers (pediatricians, nurse practitioners, physician assistants, and pediatric residents), who practiced the intervention algorithm in pairs. Two to 4 weeks later, providers met individually with the project director for practice and feedback to ensure fidelity to the intervention algorithm. The algorithm was attached to each participating patient's medical chart. The intervention clinics were each assigned an older peer counselor who was recruited, trained, and paid hourly by the investigators to deliver a brief motivational interviewing counseling session after the provider component and conduct follow-up telephone sessions.  The main outcome was the percentage of participating adolescents reporting cigarette smoking abstinence at the 6- and 12-month follow-ups.  Adolescents were shown a carbon monoxide monitor and told that it might be used to confirm their self-reported smoking status.  Abstinence was defined by one of the following reports: (1) never smoked cigarettes; (2) have smoked one or two puffs but not in the past year; or (3) have smoked in the past year but not in the past 30 days.

A total of 2,711 patients (aged 13 to 17) were recruited from 4,721 patients approached (recruitment rate of 57%); about 90% came from routine well clinic visits and 10% from acute care visits. Baseline data were available from 2,709 adolescents (1,344 in the intervention clinics and 1,365 in usual care clinics) who had an average age of 16.85 years. Fifty-four percent of the participants were female and 91% were White.  The intervention clinics had more female and Hispanic participants and more individuals with attention deficit disorder/attention deficit with hyperactivity disorder compared with the usual care clinics. Providers in both the Air it Out and usual care clinics did not differ with respect to any baseline characteristics. They had an average age of 42 and expressed greater confidence in preventing cigarette smoking initiation than in aiding cessation.

At baseline, adolescent patients who reported never having smoked or having smoked one or two puffs but not in the past year were classified as nonsmokers, and those who reported smoking occasionally or regularly were classified as current smokers.  Follow-up assessment rates were 99.6% (2,700) at the 6-month follow-up and 99.2% (2,690) at the 12-month follow-up. Participating smokers were less likely than nonsmokers to complete the final follow-up assessment. 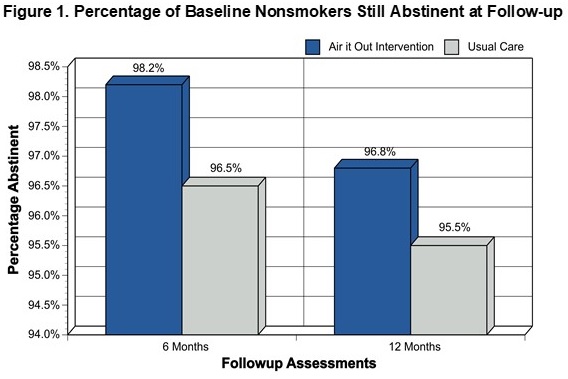 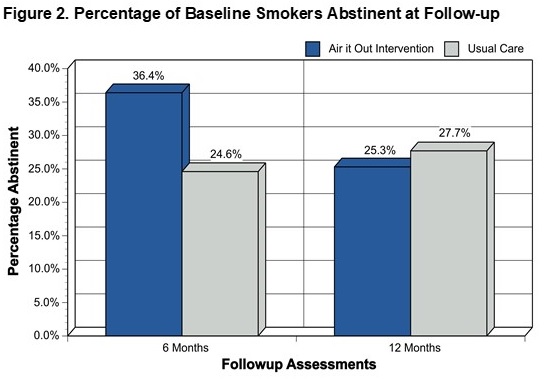 The Air It Out program is related to the following:

Step Ahead Intervention School Worksite Weight Gain Prevention in that:


(Be the first to write a review for this program)
Browse more Tobacco Control programs
NCI does not endorse nor recommend any commercial products, processes, or services, nor do they guarantee the success of programs made available on the site. The views and opinions of authors expressed on this website do not necessarily state or reflect those of the NCI, and may not be used for advertising or product endorsement purposes. Rather, the information is provided to help you make an informed decision about the best program options to meet your cancer control needs. Please see the disclaimer for further information.