In the United States, more than 16 million people have a disease caused by smoking, such as cancer, heart disease, stroke, and lung diseases. Tobacco cessation can improve health outcomes. In 2015, 22.7 million adult smokers said they wanted to quit, and 7.5% of smokers successfully quit in 2018. Self-help materials can be a cost-effective way to provide smokers resources and tools to help them quit.

Stop Smoking for Good is a self-help program for adult smokers that consists of 10 booklets and 9 pamphlets mailed over an 18-month period. The program and materials were based on the 12-month Forever Free program, which consists of eight booklets designed to prevent relapse among former smokers by conveying the content of cognitive-behavioral counseling typically provided in a clinic setting. In the development of Stop Smoking for Good, the content of the Forever Free booklets was modified to apply to current smokers rather than former smokers (e.g., by removing language suggesting the reader was already abstinent). In addition, two new booklets and nine pamphlets were created to strengthen the program's duration and intensity.

The program's 10 booklets focus on preparing to quit, smoking urges, weight control and smoking, smoking relapse, health and smoking, stress management, lifestyle changes, and remaining smoke free, and they include information on the use of pharmacotherapy. These 10 booklets are sent to smokers at enrollment and 1, 2, 3, 5, 7, 9, 12, 15, and 18 months after enrollment. The nine trifold pamphlets, sent in the months when no booklet is sent, reinforce key messages about quitting smoking. Written in the first-person narrative of a former smoker, the pamphlets aim to provide a sense of social support.

Program materials are mailed to the participant's home over an 18-month period.

The intervention is intended for adults who smoke at least five cigarettes a day, want to quit, and are able to speak and read English.

The program is suitable for implementation in the home.

For costs associated with this program, please contact the developers, Thomas Brandon and Vani Simmons. (See products page on the EBCCP website for developer contact information.)

A randomized controlled trial compared smokers participating in three mailed self-help interventions that varied in duration and intensity. Researchers recruited smokers through advertisements in the newspaper, radio, cable TV, and public transit; in public service announcements; and through community engagement. Smokers called a toll-free telephone number, and eligible smokers (n=1,874)—those who smoked at least five cigarettes per day over the past year, wanted to quit, were able to speak and read English, were not already enrolled in a face-to-face smoking cessation program, and were at least 18 years old—were enrolled into one of three groups: traditional self-help (TSH, n=638), standard repeated mailings (SRM, n=614), or intensive repeated mailings (IRM, n=622). Participants in the TSH group received a self-help booklet that was being disseminated at the time of the study, and those in the SRM group received the eight revised Forever Free booklets over a 12-month period. The IRM participants received the 18-month Stop Smoking for Good program.

At baseline, participants answered questions on demographics, pharmacotherapy use, and nicotine dependence (using the Fagerström Test for Nicotine Dependence). Across the three groups, the average age of participants was 47.5 years; 34% were men and 66% were women. The participants identified their race as White (65%), Black (30%), and other (5%), and 6% identified as having a Hispanic/Latino ethnicity.

The primary outcome was self-reported 7-day point-prevalence abstinence (i.e., no tobacco cigarettes smoked in the previous 7 days). Participants were assessed at baseline and at 6-month intervals up to 30 months after baseline. 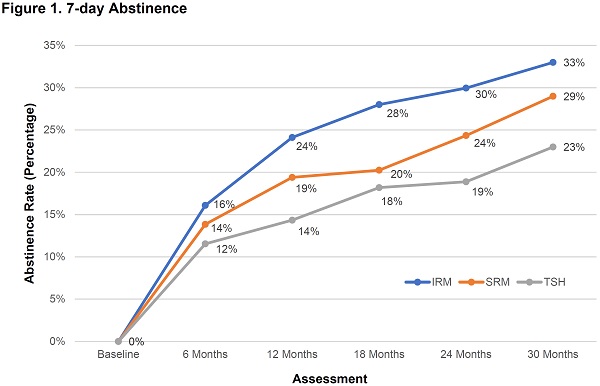 Designed to reduce second-hand smoke exposure in the home.

Designed to test the efficacy of vigorous-intensity physical activity as an aid for smoking cessation for women.