Designed to reduce second-hand smoke exposure in Hispanic households, this intervention consists of two fotonovelas (storybooks with photographs) for adults and a comic book for youth aged 4-14 to address the dangers of second-hand smoke exposure in the home, promote the banning of indoor smoking, and encourage smokers to quit. The study showed decreased ambient nicotine levels in the home.

Because of the thousands of toxic chemicals in second-hand smoke (SHS), SHS exposure causes significant illness among adult and child nonsmokers, including lung cancer, coronary heart disease, stroke, respiratory infections, asthma, ear infections, and sudden infant death syndrome. Children are particularly vulnerable to the effects of SHS exposure in their households. Parents are responsible for 90% of their children's exposure to SHS, and 11% of children aged 6 years and under are exposed to SHS in their homes on a regular basis (on 4 or more days per week). Of the estimated 42.1 million adults in the United States who were smokers in 2013, approximately 5 million (12.1%) were Hispanic. Furthermore, statistics show that smoking rates are higher among some Hispanic subgroups based on, for example, origin (e.g., Cuban Americans, Mexican Americans) and level of acculturation. Interventions are needed that target awareness of the risks of SHS exposure for nonsmoking family members in households across diverse Hispanic communities.

Project Clean Air-Safe Air (CASA) is a culturally tailored intervention for English- and/or Spanish-speaking Hispanic households. It uses two fotonovelas (storybooks with photographs) for adults and a comic book for youth aged 4-14 to address the dangers of SHS exposure in the household, promote the banning of indoor smoking in the household, encourage smokers to quit, and ultimately reduce SHS exposure in the household. Guided by the transtheoretical model of change, the intervention facilitates a transition between behaviors that compromise health to behaviors that enhance health. Specifically, the intervention aims to raise awareness about the negative impact of SHS in the household (e.g., physical health, family finances) and to help smokers work through ambivalence about changing their smoking behavior (e.g., ban smoking inside the household, seek help to quit smoking).

The 12- and 14-page fotonovelas and 8-page comic book are available in English and Spanish and are written for low-literacy users. The photographs in the fotonovelas and colorful illustrations in the comic book depict Hispanic characters and are accompanied by text in speech bubbles. The messages are tailored to reach members of the family in different types of households: The fotonovelas tell one story of a smoking single mother and her daughter and one story of a family of three with a smoking father, and the comic book tells the story of a boy who lives in the same household with his grandparents, sibling, mom, and smoking father. The fotonovelas and comic book include facts about SHS risks, the American Lung Association toll-free quit line, and the Web address for the Centers for Disease Control and Prevention How To Quit webpage.

Project CASA materials can be distributed in hardcopy format by bilingual health educators or electronically by organizations that wish to disseminate the materials to large groups. Project CASA materials are also available as part of a free downloadable application for iPhone and iPad from the iTunes store. The application, Tobacco Free Family, was not evaluated in the study reviewed for this summary.

The time needed to implement the intervention varies depending on the delivery approach. About 5 minutes are needed to read each of the 12- and 14-page fotonovelas or the 8-page comic book.

The intervention is targeted to English- and/or Spanish-speaking Hispanic households with at least one adult smoker and a youth aged 4-14 years.

This intervention is suitable for implementation in the home.

A randomized controlled trial assessed the effect of Project CASA on SHS exposure among members of 91 Mexican-American households. The Department of Epidemiology at MD Anderson Cancer Center provided access to its population-based cohort of Mexican-American households throughout Houston, Texas, from which participants were recruited. Participants were eligible for the study if they resided in a household with a child under 18 years and at least one adult who smoked. Eligible participants were contacted by telephone, briefed on study procedures, and invited to meet with the study team to enroll in the study. All study procedures were approved by the University of Texas MD Anderson Cancer Center Institutional Review Board.

Of the 458 households contacted to participate in the study, 352 did not meet eligibility criteria (i.e., no current smokers in the household, no children, no indoor smoking), and 15 eligible households refused to participate. Ninety-one households were enrolled in the study, completed baseline assessments, were placed into matched pairs, and were randomly assigned to the intervention condition (n=47) or comparison condition (n=44). A total of 167 adult participants (85 in intervention and 82 in comparison) completed the baseline survey.

The analysis was conducted using a sample that consisted of the 119 adult participants representing 76 households that completed all three assessments. Participants' mean age was 39 years, and 70% were female. Seventy-nine of 119 participants (66.4%) reported being smokers at baseline.

A pair of bilingual research interviewers visited participating households to obtain informed consent. While there, they identified two high-traffic areas in the house and installed and activated an ambient air monitor in each area. At a visit 1 week later, adult participants from each household completed a self-administered baseline survey via a hand-held computer. The survey included items to collect sociodemographic data about adult participants, such as age and sex, and smoking history. The interviewers removed the nicotine monitors at this time so they could be sent to a laboratory for analysis. They also gave intervention group participants the Project CASA fotonovelas and comic book and comparison group participants the booklet from the American Cancer Society Set Yourself Free: Deciding To Quit: A Smoker's Guide. At the 6- and 12-month follow-ups, the interviewers followed the same protocol: They installed and activated an ambient air monitor in each of the same two areas of the house in one visit and, 1 week later, collected survey data and the monitors.

The primary outcome, SHS exposure, was assessed by measuring ambient nicotine, the concentration of nicotine in the air. The ambient air monitors left in the homes for 1 week at baseline and 6- and 12-month follow-up were sent for analysis to a laboratory led by Dr. S.K. Hammond at the Center for Tobacco Control Research and Education at the University of California, Berkeley. Average weekly ambient nicotine concentrations were provided in micrograms per cubic meter (μg/m3).

Secondary outcomes were knowledge of SHS hazards, perceived health vulnerability, and self-reported smoking status. The survey used at baseline and 6 and 12 months included questions that addressed these outcomes. Knowledge was assessed for all adult participants using 24 items with response options on a 5-point Likert scale ranging from "strongly agree" to "strongly disagree." Perceived health vulnerability was assessed for baseline smokers using one item ("How much would your continuing to smoke hurt your health?") with the response options of "a lot", "some or a little", and "not at all." The survey also asked a primary informant from each household (a smoking or nonsmoking adult), "Is smoking allowed inside your home?" as a subjective measure of SHS exposure in the home.

Among participants that completed all assessments, no significant baseline differences were found between the intervention and comparison groups in age, sex, intensity of smoking, smoking status, knowledge of SHS hazards, and measured nicotine levels (high-exposure room). 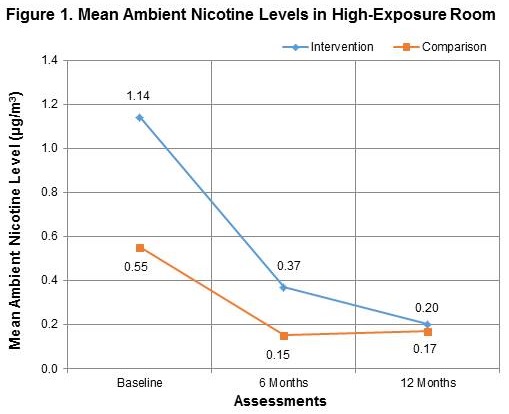 The program is designed to promote quitting among adult smokers.

Designed to test the efficacy of vigorous-intensity physical activity as an aid for smoking cessation for women.

Project Towards No Tobacco Use (TNT)

School-based prevention project designed to delay the initiation and reduce the use of tobacco by middle-school children.

Designed to promote tobacco use prevention among middle school children.