For inquiries related to staff training or program implementation, please contact Jessica Haughton at: jhaughton@sdsu.edu or (619) 594-6302.

For inquiries related to the programmatic materials, please contact Elva Arredondo at: earredon@sdsu.edu or (619) 594-3481.

Currently in the United States, 47% of Hispanics/Latinos are considered obese, and 54% are physically inactive, rates that exceed those among non-Hispanic Whites. Exercise and a balanced diet can contribute to a healthy weight and reduce the risks of health-related conditions associated with obesity, including heart disease, stroke, type 2 diabetes, and certain types of cancer.

Physical activity guidelines recommend that adults engage in a weekly minimum of 150 minutes of moderate-intensity aerobic activity (e.g., brisk walking, dancing) or 75 minutes of vigorous-intensity aerobic activity (e.g., jogging, swimming laps) along with muscle-strengthening activities at least 2 days each week, with adjustments made for older adults with chronic health conditions and a low level of fitness. Interventions that are designed to increase physical activity among Hispanic women (Latinas) are needed.

Faith in Action (Fe en Acciόn) is a 2-year, church-based intervention that promotes physical activity among Hispanic women (Latinas). Faith in Action is based on the ecological framework for health behaviors. This framework, which recognizes the importance of creating socially and physically supportive environments to successfully change behavior, targets multiple levels of influence: the individual, interpersonal, organizational, and environmental. Following this model, the program includes activities at each of the ecological levels to effect change in physical activity.

Faith in Action is tailored to the culture and faith of participants, integrating culturally relevant content (e.g., foods, music) and elements of faith, including those that reinforce health messages (e.g., the body is the temple of God). The intervention uses trained promotoras (lay health educators from the local community) to deliver each of the program’s activities over the 2-year period:

-- Environmental improvement projects: To encourage physical activity, promotoras facilitate improvements to pedestrian environmental features on church grounds and neighborhoods. The promotoras conduct a walkability audit to assess, for example, sidewalk conditions, street lighting, and the presence of trees and plants. Based on this assessment, church members collaboratively select environmental targets and projects to address these targets, and they and other community members help complete the projects. Promotoras plan meetings, develop action plans and reports, and take “before” and “after” pictures.

The intervention is intended for Latinas aged 18–65 years.

This intervention is intended to be implemented in church-based settings.

A randomized controlled trial compared the intervention with an alternative intervention among churchgoing Latinas. Sixteen churches in San Diego, California, were randomized to either the intervention group or to a comparison group offering a cancer screening intervention. Churches were recruited from a list of Catholic churches offering Spanish-language mass that was provided by the Catholic Diocese of San Diego. Churches were eligible to participate in the study if they had at least 200 Latino families attending and were willing to be randomized and to provide space for study activities. Participants were eligible to enroll if they self-identified as Latina, were between the ages of 18 and 65 years, attended the church at least four times a month for any reason, lived within 15 minutes of the church (driving), had reliable transportation to get to the church, did not identify barriers to attend activities at the church, planned to attend the church for the next 24 months, did not attend other churches enrolled in the study, did not have a condition that would preclude them for being active, and were inactive (defined as getting less than 250 minutes of accelerometer assessed MVPA per week).

The comparison condition, also based on the ecological framework and delivered by promotoras, focused on cancer screening for breast, cervical, colorectal, and skin cancer. Participants received a 6-week workshop with weekly classes of 1.5–2 hours each, class reminder calls, up to six motivational interviewing calls over 2 years, and increased access to health care. Over the 2-year study period, promotoras repeated the workshop, so the series was offered by each church at least six times per year.

The study enrolled 436 Latinas, 217 in the intervention group and 219 in the comparison group. The average age of participants was 44.4 years, and the average time living in the United States was 21 years; 90.8% were born in Mexico. Most participants (77.3%) were married or lived as married, and 65.8% were employed. The average body mass index (BMI) was 30.3 kg/m², and the average waist circumference was 94.9 cm. At baseline, there were no significant differences between groups in the primary outcomes.

The main outcome—moderate to vigorous physical activity (MVPA)—was measured with an accelerometer at baseline and 12-month follow-up. At each timepoint, participants attended two appointments. During the first appointment, research assistants measured height, weight, waist circumference, and fitness (3-minute step test). At this time, participants were given an accelerometer to wear for a minimum of 12 hours per day for 7 days. Seven to 10 days later, participants attended a second appointment to return the accelerometer and complete self-report instruments. The accelerometer data included data from 5 valid days (valid days are a minimum of 10 hours per day) with at least one weekend day. Each minute of data was counted, and MVPA was defined as 2020 counts per minute or more.

Although the study (like the intervention) was 2 years in duration, the documents included in this review described only 12-month outcomes because 24-month outcomes were not yet available. 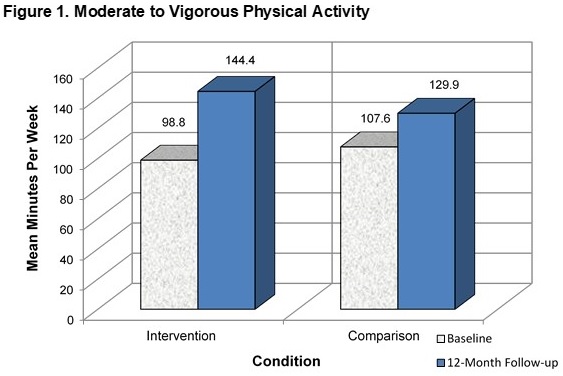 Promoting Physical Activity in Churchgoing Latinas. (2019). Retrieved from the National Library of Medicine's Clinical Trials.gov website, https://clinicaltrials.gov/ct2/show/results/NCT01776632, on May 24, 2019.


(Be the first to write a review for this program)
Browse more Physical Activity programs
NCI does not endorse nor recommend any commercial products, processes, or services, nor do they guarantee the success of programs made available on the site. The views and opinions of authors expressed on this website do not necessarily state or reflect those of the NCI, and may not be used for advertising or product endorsement purposes. Rather, the information is provided to help you make an informed decision about the best program options to meet your cancer control needs. Please see the disclaimer for further information.