Designed to decrease the consumption of sugar-sweetened beverages among adults to reduce obesity, this intervention addresses health literacy and changes in attitudes, subjective norms, perceived behavioral control, and behavioral intentions through three small-group classes, a teach-back call, and 11 Interactive Voice Response calls. The study showed a decrease in consumption of sugar-sweetened beverages.

Currently in the United States, sugar-sweetened beverages (SSBs) such as sweet tea, soda, fruit drinks, and sports drinks are the leading source of added sugar in the American diet. SSB consumption is linked to obesity, weight gain, type 2 diabetes, heart disease, kidney disease, non-alcoholic liver disease, tooth decay and cavities, and gout. The average U.S. adult consumes 145 kilocalories (commonly called "calories") from SSBs daily, and 25% of adults consume at least 200 kilocalories in SSBs daily (greater than one 12-ounce can of soda). Consumption tends to be higher among those who have a low income and live in certain geographical areas. The majority of SSBs are consumed inside the home; of those consumed away from home, most are purchased in stores. Interventions that encourage reduced consumption of SSBs across U.S. populations generally, as well as among rural populations in medically underserved areas specifically, are needed to help improve health outcomes.

SIPsmartER aims to reduce the consumption of sugar-sweetened beverages among adults who drink at least 200 kilocalories in SSBs daily. The 6-month intervention is based on the theory of planned behavior (TPB) and health literacy strategies. TPB posits that behavior can be influenced through changes in the constructs of attitude, subjective norms, perceived behavioral control, and behavioral intentions. The intervention relies on health literacy principles such as clear communication techniques, numeracy, media literacy, and teach-back methods to change these TPB constructs and ultimately decrease SSB consumption. SIPsmartER has three essential components:

-- Small-group classes conducted by a health educator: Three 90- to 120-minute group classes occur over the course of the intervention at weeks 1, 6, and 17. In the first class, participants learn about SSB consumption recommendations (no more than 8 fluid ounces of SSBs daily), the health risks related to SSBs, the influence of others in beverage consumption behaviors, and various SSBs and healthier options. They also learn how to calculate current SSB intake and develop a personal action plan with goals for reducing their consumption. They receive a behavioral diary to record their daily intake, information they report later during calls with an Interactive Voice Response (IVR) system. The remaining classes include a re-evaluation of action plans and convey more information about SSBs (e.g., nutritional labels, costs of drinking SSBs) and skills to avoid them (e.g., applying critical thinking when viewing SSB media advertisements, calculating the contribution of SSB calories to energy needs). Classes are hands on and include materials written at an 8th-grade reading level. Participants who miss a class receive the materials by mail and a telephone call guided by a semi-structured script to verbally reinforce course material.

-- A teach-back call conducted by a health educator: One week after the first class, participants receive a one-on-one teach-back call during which they explain key concepts from the class and the methods they used to track their behaviors and calculate weekly beverage consumption averages. If they provide incorrect information, they are prompted to provide a correct answer.

-- IVR calls: Participants receive 11 IVR calls, weekly for the first 3 weeks and every other week thereafter. IVR calls reinforce key program messages, provide new content, and lead participants through personal action planning. Participants begin each call by recording their average daily ounces of SSBs consumed in the past week. Based on their responses, they receive messages tailored to their level of progress (i.e., meeting or exceeding goals, not meeting goals but making some progress, making no progress). In addition, based on the consumption reported during the last two calls, the system guides participants through a process to set new, realistic goals. Once a participant is consuming the recommended amount of SSBs, IVR calls encourage maintenance goals.

SIPsmartER is intended for adults who consume 200 or more kilocalories in SSBs per day.

This intervention was designed to be implemented in community settings.

For costs associated with this program, please contact the developers, Jamie Zoellner or Kathleen Porter. (See products page on the RTIPs website for developer contact information.)

A randomized controlled trial enrolled adults who consumed 200 or more SSB kilocalories per day and lived in rural southwest Virginia counties federally designated as medically underserved. Participants were randomly assigned to receive SIPsmartER or the comparison intervention, MoveMore. Like SIPsmartER, MoveMore was influenced by the theory of planned behavior and health literacy principles. The interventions were matched in duration and contact, but MoveMore's primary goal was to increase moderate-intensity aerobic activity to 150 minutes per week and muscle-strengthening activities to 2 or more days per week.

Researchers recruited English-speaking adults who were 18 years or older, consumed 200 or more SSB kilocalories per day, had no self-reported contra-indications for physical activity, had regular access to a telephone, and were not enrolled in another nutrition or physical activity program. From March 2012 to May 2014, participants were actively recruited in cohorts by county, and cohorts were spaced apart every 3 months.

Randomization occurred at the individual level, with participants drawing from sealed envelopes designating the intervention group (155) or comparison group (146). The final sample was 93% Caucasian and 81% female; 31% had a high school education or lower, and 43% had an annual income of less than $15,000. The mean body mass index (BMI, kg/m2) was 33.0, and 78.5% were overweight or obese. There were no significant demographic differences between participants at baseline.

The main outcomes, caloric consumption of SSBs and fluid ounce consumption of SSBs, were assessed using the Beverage Questionnaire (BEVQ-15), a computer-audio-assisted module administered by telephone. This instrument assesses past-month consumption of 15 categories of sweetened and unsweetened beverages. For each category, respondents indicate their frequency of consumption: never or less than 1 time/week, 1 time/week, 2-3 times/week, 4-6 times/week, 1 time per day, 2 times per day, or 3 or more times per day. Respondents also report portion sizes, indicating less than 6, 8, 12, 16, or more than 20 fluid ounces. SSB intake was quantified by summing kilocalories from five categories of drinks: regular soft drinks, sweetened juice beverages/drinks, sweetened tea, coffee with sugar, and energy and sports drinks.

-- SSB attitudes, subjective norms, perceived behavioral control, and behavioral intentions, which were measured with a 20-item theory of planned behavior questionnaire. Each was rated on a scale from 1 (low) to 7 (high).

-- Media literacy (perceptions of SSB-based advertisements), which was measured with a 19-item scale with totals ranging from 19 (low) to 133 (high). 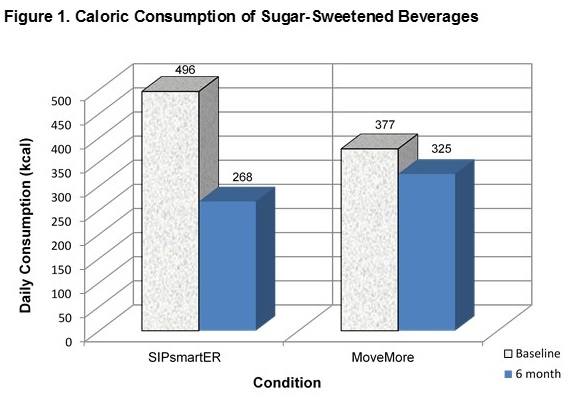 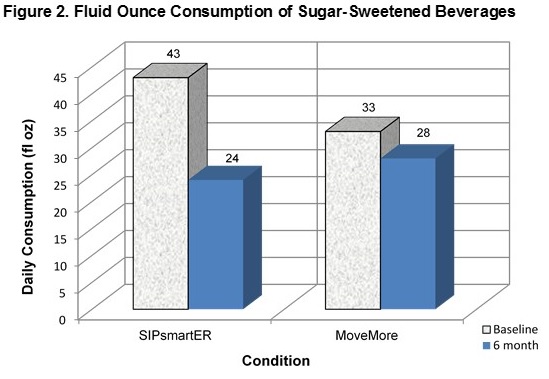 Designed to increase physical activity and fruit and vegetable consumption among adults.

Designed to promote healthy dietary intake for adults who are at increased risk for colon cancer.

Walk Your Heart to Health (WYHH)

The program is designed to increase physical activity among adults.

Reach Up & Out: Toward a Healthy Lifestyle

The program is designed to promote nutrition and physical activity among rural African American women.

Designed to reduce obesity among children and adolescents.